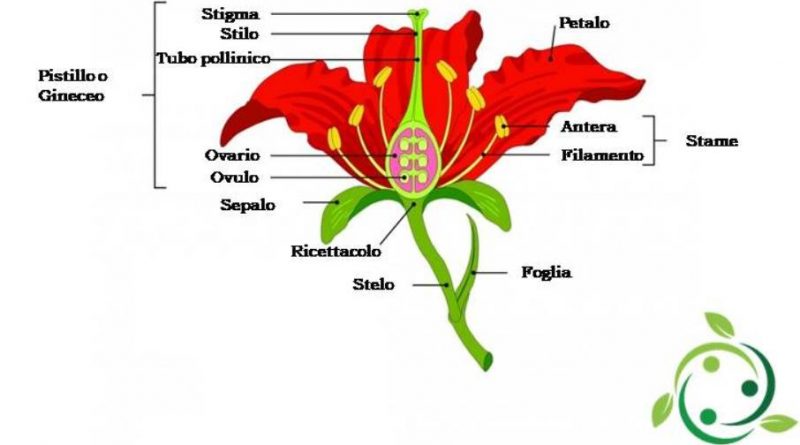 With androecium we mean the set of organelles that make up the male reproductive system of flowers; the androecium is formed by several stamens, which have the function of generating the male gametophytes or pollen grains, of which each is made up of two parts: a thin one called “filamento” and the other, thick, called “antera” ( formed by 4 pollen sacs and microspores).
The stamens that make up the androcean are arranged on the flowering axis that generates them, or helix (Gymnosperms in general) or whorls (Angiosperms in general) and in the latter case, in a complete flower, the androcean is placed between the corolla and the gynoecium.
The number of andrinth stamens in the various flowers varies, from one to very many. When they are from one to twenty the androchero takes the name mono-di-tri -… icosandro respectively; when they exceed twenty it assumes the indeterminate general qualification of androecium poliandro.
Also the length of the different stamens of the same androcean may be varied: if of the 4 stamens that compose it, 2 are long and the other 2 short (Labiate) we speak of androecium and stamina didinami (Class 14, Didinamia, of Linnaeus) ; if instead there are 6 stamens, 4 long and 2 short (Crocifere), androceo and stamens are called tetradinami (Cl. 15, Tetradinamia, from Linnaeus).
Moreover the androecium can present the stamens all and completely free, or more or less extensively welded, both between them, and with the members of the flower contiguous to them, that is the corolla that is the gynaeceum. The welding of the stamens between them can be carried out by means of only filaments or only anthers; in the first case androecium and stamens are called adelfi; in the second, sinanterici or singenesiaci.
The Adelfia (v.) Can be made in the whole length of the filaments, or only for a part, even a minimal part, of them and can give rise to one or several groups of stamens in the same androecium indicated with the names: mono- of- …. poliadelfi.

The stamens, morphologically, are highly modified leaves formed by a foot that is inserted into the receptacle of the flower, called filament, and a distal portion called anther. The filament is the sterile part of the stamen, it can be very long, short or missing, in this case the anthers are called sessile. Generally it is filiform, but it can be big, even petaloid, and can be provided with appendages.
The anther represents the fertile part of the stamen and is made up of two distinguishable, contiguous parts, called caskets, joined by an area called connective, which is also where the anther joins the filament.
This is generally formed by two display cases, or sometimes by one as in the malvacee and cannacee or by three.
A section of the anther perpendicularly along its axis shows that each of them contains one or two pollen sacks that extend along the entire length.
After the maturation of the pollen grains the so-called dehiscence is produced, that is the opening of the anther from which the pollen will be released. The responsible fabric is called endothelium. If the opening is produced for the entire length of the septum that separates the pollen sacks, the dehiscence occurs in the longitudinal direction, which is the most frequent case. In other cases the endothelium is located in limited areas which rise as valves or doors: in the poricidal dehiscence (as in the solanaceae) where there is no endothelium, the destruction of the tissue at the apex of the anther is produced. thus forming the pores from where the pollen will come out.
The staminodes are instead the sterile stamens that normally appear in certain flowers. The function of the staminoids is varied and can perform the production of nectar or simply an attractive function that is usually performed by the petals.