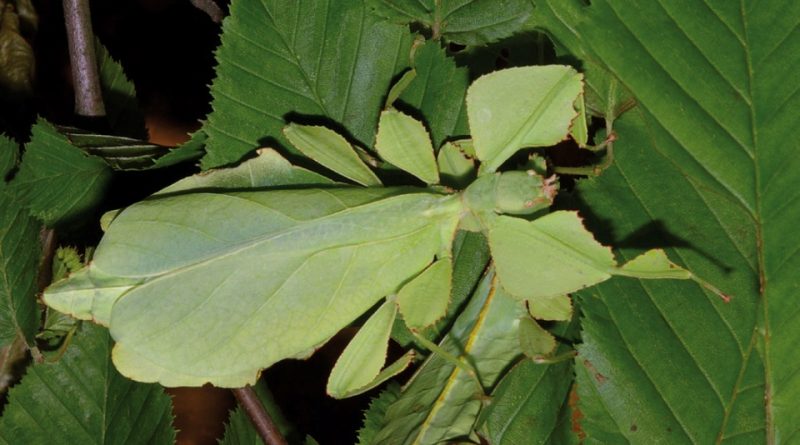 Geographical Distribution and Habitat –
The Leaf-shaped insects is a herbivorous insect is a species native to Malaysia, where it lives mainly in the forests above the Indian pear plants and in the wet areas of the Indies and the Indian Ocean islands. It is very adept at camouflaging itself among the foliage, given its particular similarity.

Morphology –
Phyllium giganteum is a large insect, with a size of the adult individuals of about 12 cm. it has fixed elytrans which do not allow it to fly, but which it uses as a parachute to let itself fall.
It has the ability to perfectly imitate a green leaf, even simulating its nibbled edges.

Attitude and biological cycle –
This insect reaches the adult stage in about 8-9 months passing through as many wetsuits; the adult female lives from 3 to 5 months and lays eggs, in numbers of 100 – 300, black, similar to seeds, characterized by a very spongy shell, which are left to fall on the bottom.

Ecological Role –
Phyllium giganteum is part of the Phasmatodea Order; these are insects, commonly called stick, which are easily camouflaged with the environment due to their color (homochromy) and their shape (homomorphism), imitating stems, twigs, twigs, leaves, etc., and are able to times of changing color both slowly and suddenly. They generally feed on voraciously devouring vegetables.
The Phyllium giganteum in its mimetic activity resembles in all respects to a leaf, simulating also its “chewed” edges. The male is not known of this species of Phyllium, or at least it is quite rare, and reproduces, at least in captivity, exclusively by parthenogenesis.