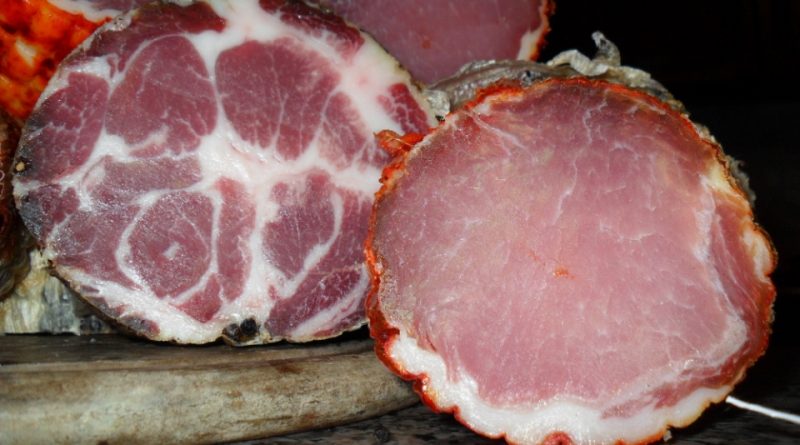 Capocollo di Calabria is a traditional food product from Calabria of ancient origins.

Origins and History –
The Capocollo of Calabria has now become part of the local tradition and folklore, thanks above all to the history and great value that the inhabitants of this splendid region have always attributed to it.
The origins of this product are most likely lost during the colonization of Magna Graecia. Nevertheless the first traces ascertained on the production of Capocollo and other cured meats date back to the eighteenth century.
This product, along with other Calabrese sausages, appears officially in various texts of the seventeenth century, as well as in the “Statistica Murattiana”, the vast census conducted by the University of Naples in 1809.
The production of capocollo is strongly linked to the breeding of pigs which is deeply rooted in the Calabrian culture.
Until a few decades ago, in fact, pigs were slaughtered directly by the householder, following a ritual in which the whole family attended. The ancient saying “of the pig does not throw anything away” derives from this practice; in fact, women even collected the blood of animals to produce the typical blood sausage. This custom has been progressively replaced by the butchers of small and large sausage factories, which still carry on the original processing methods.

Raw material –
Capocollo di Calabria is the name given to coppa or loin in the regions of southern Italy. In any case it is a salami produced from the upper portion of the pork loin. Its processing takes place following the indications expressed by the Production Regulation of the EC Reg. N.134 / 98, with the supervision of the Consorzio Tutela Salumi di Calabria DOP.
Excluding processing is boar and sow meat.
The pigs, at the time of slaughter, must be weighing no less than kg. 140, of an age of not less than eight months, having the characteristics typical of Italian heavy pigs, obtained using traditional large breeds such as:
– Calabrese;
– Large White and Italian Landrace as improved by the Italian herd book or children of boars of those breeds;
– pigs born of boars of the Duroc breed, as improved by the Italian herd book;
– pigs born of boars of other breeds or hybrid boars provided that such boars – whether born in Italy or abroad – come from selection or crossbreeding schemes implemented for purposes not incompatible with those of the Italian herd book, for the production of the pig heavy.
By contrast, the following are expressly excluded:
– pigs bearing antithetical traits, with particular reference to stress sensitivity (PSS);
– pure animals of the Belgian Landrace, Hampshire, Pietrain and Spot breeds.
The pigs must also present the quality mark “pig bred in Calabria” and comply with the requirements regarding breeds, feeding and breeding techniques.

Description –
The real Capocollo di Calabria PDO is recognized above all for its inimitable appearance and taste. Among the most interesting features, we can easily distinguish it due to its extreme balance in white and red streaks. Furthermore, the thin layer of grease that covers the entire outer circumference of the Capocollo must have a thickness of 3-4 millimeters, to prevent the meat from drying out during seasoning.
Even labeling can provide us with important information on the originality of the product. The real Capocollo DOP must always present a label or a distinctive card, bearing the name of the salami, the designation of the Protected Designation of Origin and the data of the manufacturing company.
In detail, the “Capocollo di Calabria” at the time of release for consumption has the following characteristics.
Cylindrical in shape, wrapped in natural film, hand-tied in an enveloping shape with natural twine.
At sight it has a more or less intense pink or red color due to the presence of black pepper or ground red pepper.
When cut, it has a bright pink color with streaks of fat typical of the pork loin.
The taste is delicate and refines with aging; the scent is characteristic and of the right intensity.

Production Mode –
The real Capocollo di Calabria is made strictly bred in the Calabrian territory.
For its production the upper part of the loin of pigs born and bred in Calabria is used. The initial weight, when raw, must be between 3.5 and 4.5 kilograms. After initial boning, salting is carried out, made exclusively with salt, which remains applied for a period between 4 and 8 days. After this time, the meat is washed, dried and sprinkled with wine vinegar. An energetic massage precedes the flavoring with peppercorns, before wrapping it all in the porcine parietal diaphragm. After subjecting the capocollo to a strong binding, the gut is pierced. The seasoning takes place in well-ventilated rooms, for a period of about 15 weeks.
Furthermore, particular care is given to feeding pigs; the feeds must be integrated compounds of barley, field bean, corn, acorns, chickpeas, to an extent not less than 50% of the content.
The use of cassava and potatoes and by-products that could give unwanted tastes and smells to meat and fat is not allowed.
For more compact meat for fattening, broth feeding is prohibited.
Only natural ingredients such as salt (sodium chloride), black peppercorns and powder, spicy red pepper, sweet red pepper, wine vinegar are allowed for the packaging of Capocollo di Calabria. They can also be used: caseinate, ascorbic acid and / or sodium salt, sodium lactate, sodium and / or potassium nitrate, sodium and / or potassium nitrite. Their use is limited to what is allowed and as long as it is provided for by the current legal provisions.

Gastronomic Use –
Capocollo di Calabria is characterized by a balanced flavor, thanks to a good relationship between the delicate flavor of the meat and the scent of spices. These important features make it a versatile product, able to match perfectly with many foods.
Capocollo is perfect if eaten alone, cut into thin slices, for a traditional appetizer or snack, perhaps with a slice of fragrant and tasty bread, such as Pane di Altamura or Pane di Matera DOP.
To accompany Capocollo di Calabria, you can choose fairly full-bodied and not too tannic red wines, possibly local, such as Cirò DOC, or the famous Primitivo di Manduria DOC, produced in nearby Puglia.