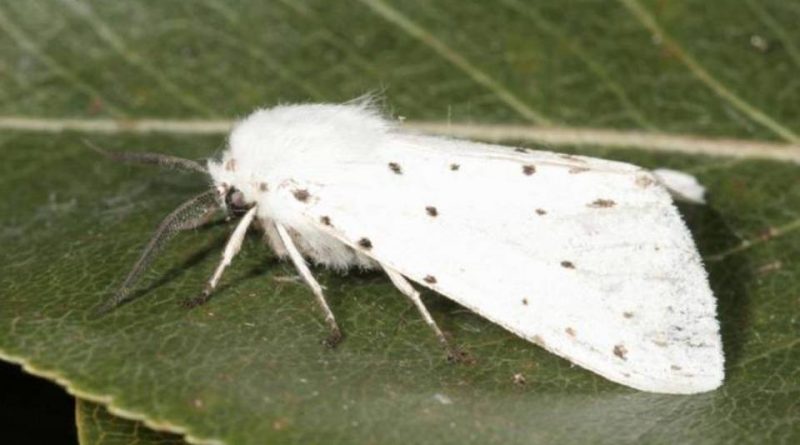 Fall webworm (Hyphantria cunea (Drury, 1773)), is a moth belonging to the Erebidae family.

Geographical Distribution and Habitat –
American Iantrophy is a defoliator moth widespread in Eurasia and North and Central America. Its first appearance in Europe is in the forties, in Hungary and Germany, and subsequently it spread to other European countries. The first reports of ifantrics in Italy occurred between the end of the seventies and the early eighties, especially in the Po valley and surrounding areas.

Morphology –
Hyphantria cunea is a moth that can be recognized, at the adult stage, for its white or white dotted black wings, with an opening of about 2.5 – 4 cm; most dotted butterflies are represented by males.
The larvae have two stages (first and second age) and appear yellowish with a double row of blackish dots along the body. The mature larvae reach a length of 3 – 3.5 cm and are hairy, brownish in color and with longitudinal rows of blackish tubercles; from these appear tufts of light hair (on the sides) and dark (on the back). On the sides of the body there are two longitudinal bands of yellowish color.
The insect winters as a chrysalis, making 2 generations a year with adults appearing between April and May, and July-August respectively.
The eggs are light green and the adults lay them in groups on the lower page of the leaf.

Attitude and biological cycle –
Fall webworm winters at the chrysalis stage, in the ravines of the bark or at the base of the host plants, among the dry vegetation, or in other shelters.
In spring, between late April and mid-May, the first flight adults flutter from the wintering chrysalis; immediately after the mating and oviposition occurs, in the lower pages of the leaves.
Towards the first days of June the first generation larvae are born and remain active until the first days of July and they feed on the leaves, causing intense defoliation.
The young larvae cause superficial erosions that affect the mesophyll, leaving the veins intact and, at times, the upper epidermis. With maturity the larvae become increasingly voracious and devour the whole leaf, including the main vein.
During this phase of activity the larvae construct, on the foliage, large nests with silken threads that cover buds and twigs; they shelter in their nests during the day. The nests are abandoned when the contained leaves have been devoured.
These larvae originate the 2nd flight adults; these flicker from the second decade of July until the first days of August.
These adults originate the second larval generation which is more dangerous than the first; these larvae are active from the end of July until the end of September, with a maximum of activity in August. These larvae incrisalidano (from September to early October) and winter. The Hyphantria cunea plays 2 generations per year.
This defoliator moth is able to infest various plants both cultivated and ornamental. The damage is mainly caused by the nutrition activity of the leaves, by this larva, which causes intense defoliation.
The damage is often devastating due to the gregarious nature of the larvae; they are able, in summer, to completely defoliate the affected plants, causing a strong stress to the plants themselves. These are forced to push back and re-sprout in moments of strong water scarcity and excessive heat when, normally, they should be in vegetative stasis. The serious attack, consequently, involves a weakening and a progressive deterioration, especially if the attacks are repeated over the years.

Ecological Role –
Hyphantria cunea is a polyphagous moth; it feeds on various plants, including: Maple, Mulberry, Lime, Poplar, Willow, Elm, other forest broadleaf trees and of scenic interest, Pomacee, Drupacee, Vine, Walnut and others.
The containment of this insect must be initiated by mechanical means through the destruction of the nests to lower the pest potential.
This type of struggle is applied especially on plants of landscape interest, in urban parks, in gardens where chemical treatments are not always possible both for hygienic reasons and for technical reasons (large specimens in which it is not easy to reach the highest crown).
The mechanical fight, in the case of infestations of a certain importance, must be combined with that of biological and biotechnological nature.
Biological and biotechnological control, although in progress, can be carried out on some plant species (Poplar, Apple Tree, Vine, Ornamental and some forest); furthermore, even in certain operating conditions it is possible to apply microbiological control techniques with the use of formulations based on Bacillus thuringiensis ssp. kurstaki. The success of these methodologies is linked to the respect of the conditions of use of the preparation; in fact the products based on Bacillus thuringiensis must:
– be distributed evenly, wetting the hair completely;
– the treatment must be performed in the evening, because the toxin is photolabile to UV rays;
– the treatment must be done on young larvae, better if of first age, because they are more sensitive and with a more rapid effect.
In addition to Bacillus thuringiensis, microbiological preparations are being tested including mixtures of Bacillus thuringiensis with preparations based on mushrooms; in particular with the fungus Metarhizium anisopliae which showed, in experimental tests, a discrete activity on Hyphantria larvae (52.4% mortality in tests conducted by the Phytosanitary Consortium of Reggio Emilia, 1986). In some European countries (Czechoslovakia and others) experiments are being conducted for the control of defoliators with a Protozoan: Thelohania hyphantriae.
Among the natural enemies of Insantria we can remember:
– Antocorid rincoti, including in particular the genus Orius, active predators of the eggs;
– Chrysopa carnea, whose larval stages are egg predators;
– Pimpla instigator, Hymenoptera Icneumonide, and Eulophide Tetrastichus goidanichi, parasitoids of chrysalises.
The recourse to its natural enemies, however, is still in the process of being settled as this moth is relatively recent in its introduction in Europe, so that the biocenoses with its natural population regulators is not yet in equilibrium.
Other techniques are being implemented using chitin-inhibitor development regulators, on eggs or young larvae (if the type of infested plant to be treated is compatible with product registration). In recent years (since 1992) an unusual behavior of the larvae of Iphantria has been noticed, in some cases they were slow and not very vital, with a high mortality in the populations. From the observations and analyzes carried out, the presence in these larvae of a Baculovirus or Granulosis Virus (HcGV) was found to be responsible for the described symptoms. It is supposed to be a virus of another species of Lepidoptera already present in the environment and that attacks larvae subjected to stress or environmental or to effect of treatments (also based on Bacillus thuringiensis); in any case, this “illness” of the Insantria is to be followed with interest for the possible future application implications. Finally we must point out that the pheromone of the lantrophy was developed, an important support to the chemical and biotechnological struggle, above all for the use in the monitoring sexual traps for the census of the populations and to follow the course of the flights and the consequent ovidepositions .
The use of chemical control must always and in any case be the last resort and, over time, it will have to be totally abandoned due to its negative effects on the biocenosis of beneficial insects and on the negative effects on the ecosystem in general.
Direct chemical control must take into due consideration both the type of infested plant and the context in which it is found (cultivated in orchards, woody cultivation (Poplar), nursery plant, specimens in parks, gardens or avenues of private urban greenery or public).
In any case, the active ingredient to be used must be registered for the plant species to be treated and the technical possibility of performing the treatment must be ascertained.
Hyphantria is fought when it is at the larval stage, better if it is possible to intervene against the young larvae, when the damage is still limited and the larvae are more sensitive.

How the black pine is grown

How the black pine is grown