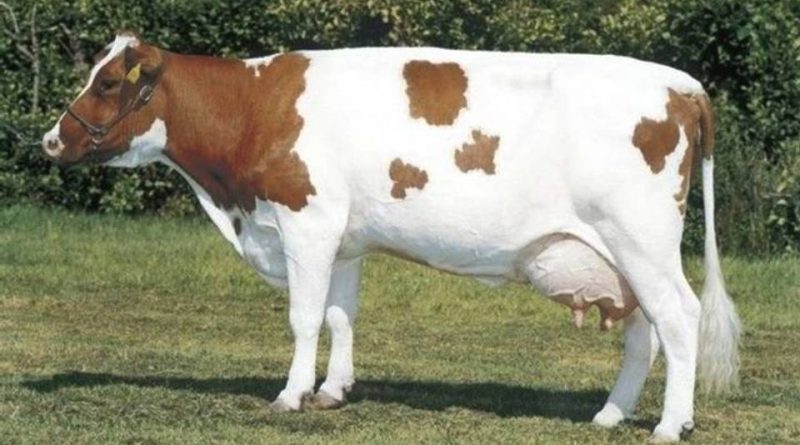 The Meuse-Rhine-Issel or MRI breed is a bovine breed (Bos taurus Linnaeus, 1758) bred especially in the regions where the three rivers Meuse, Rhine and Yssel meet, with a dual aptitude for meat production and milk.

Geographical and area distribution –
The Meuse-Rhine-Issel or Meuse-Rhine-Yssel takes its name from the region in which it is most bred and which corresponds roughly with the crossing of the three rivers Maas, Rhine and Issel.
From the early 1970s, cattle of this breed were first imported into the United Kingdom and Ireland; it is also present in small quantities in Australia, the United States and Canada. The presence in the Netherlands has greatly decreased since the 1970s, due to the growing influence of the Frisian.
Today it is bred in purity above all in the triangle of land formed by the rivers Maas, Rhine and Yssel, in Holland, Germany and Belgium.

Origins and History –
Meuse-Rhine-Issel is a breed of cattle originating in the Netherlands and Germany. This breed was created in the second half of the 19th century. Since 1874 it has been registered in the Nederlands Rundvee Syndicaat and has been recognized as a separate breed since 1905.
The goal of creating this breed was to create a cattle breed that could be used for both milk and meat production. There are about 35,000 Meuse Rhine IJssel cattle in the Netherlands.
It is a red-spotted breed, originally from Friesland with an uncertain formation but with origins in common with the Dutch Black Pezzata and perhaps selected starting from the 1700s. . After 1800 the selection of black was made to improve milk production by breeders in the fertile coastal areas, a selection that gave rise to the Black Frisona; the cattle selected with a red spotted coat, operated by farmers in the inland areas rich in cereals and potatoes, gave rise to Meuse-Rhine-Issel.
The Meuse-Rhine-Issel has contributed and still contributes to the improvement of the Red Pezzate (both Simmental derivatives and Red Pezzate of the European Plains) of many countries (especially Western Europe).

Morphology –
The Meuse-Rhine-Issel is a breed characterized by animals of medium height, with shorter limbs and more massive than the Frisona.
It is recognized by the color of the coat which is spotted red tending to fomentian, with limbs and the ventral region generally white and with the head generally red with spots on the forehead.
The color of the muzzle is carnic red, the horns are short and waxy yellow.
Adult females weigh 650-700 kg and have a height of 135-140 cm.

Production aptitude –
It is a dual-purpose breed with a slight prevalence for milk.
On the controlled animals an average production of 6.030 kg of milk was ascertained, with 4.25% fat, 3.47% protein.
The attitude to meat production is also more than fair.