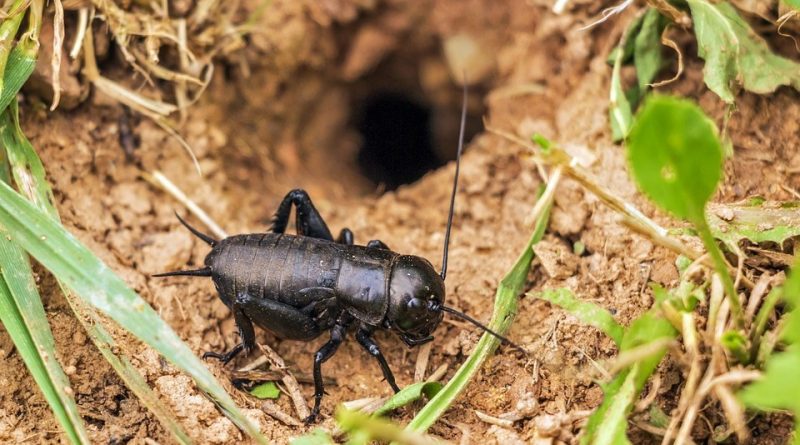 The field crickets (Gryllus campestris Linnaeus, 1758) is an orthopteran insect belonging to the Gryllidae family.

Geographical Distribution and Habitat –
Il field crickets is a common insect in Eurasia and North Africa. In Italy it is present throughout the territory from the plain up to 1500 meters, in rather warm environments, in low grass meadows, in cultivated fields and in grasslands where it digs tunnels in the ground. The period of activity of adults is from late April to August.

Morphology –
The field cricket is recognized as the male measures 18-26 mm and the female 19-27 mm. It is a robust insect with a short and slightly flattened body, a large and globular head with long antennae and hind legs suitable for jumping, of a glossy black color with internally reddish femora and tegmine (wings) partially yellowish or orange. The pronotum is less broad than the head, shrinks posteriorly (this character distinguishes it from Gryllus bimaculatus with which it can be confused). The wedding chant of the males is obtained by rubbing the tegmine, and it is very intense between May and June.
The nymphs are similar to the adult insect except for the small size and the absence of wings.
Not to be confused with the allied species (Gryllus domesticus) or Grillo del focolare or Grillo domestica which is yellowish brown, oblong in shape, and lives in the cracks of the walls near the hearths of rural houses or near ovens, feeding on flour, bread crumbs, cereal debris; it is active especially at night.

Attitude and biological cycle –
The life cycle of Gryllus campestris lasts one year. The female lays hundreds of eggs in the ground, which hatch within a couple of weeks in the June period. The nymphs live together for a few weeks; then each one, at the penultimate young stage, moves away to dig his own den before winter, where the lethargy takes place.
They perform various wetsuits and winter, but in mild and sunny winter conditions they remain rather active.
In the period between late April and May, with the last moult, they become adults; mating takes place between May and June and they live until mid-July.
The field crickets, also called the singing cricket which, together with the hearth cricket (Gryllus domesticus or Acheta domesticus), constitutes a well-known background sound in the summer, particularly during the day and in the early part of the evening.

Ecological Role –
The field cricket, despite its wings, cannot fly. But he is a quick runner. It feeds on herbs and small insects, alive or dead. The cricket is in turn a delicious morsel for birds, reptiles and mammals, such as foxes, shrews and domestic cats.
To find a cricket in the fields is far from easy. This insect, having heard the danger, is silenced as soon as one approaches it and disappears quickly in the burrow that he himself has dug into the ground, a tunnel without branches that can reach up to 40 centimeters in length.
In front of the entrance, the male cricket keeps a small area that serves as both a stage and an arena free from grass and stones. As soon as an unknown male dares to paw, the landlord makes a high-pitched sound. If the acoustic threat is not enough, we move on to the de facto pathways: the contenders whip each other with long antennas, push and bite each other until one of them surrenders and leaves.
The field cricket is found in valleys with a temperate climate, in hot and dry environments, but also up to 1800 meters of altitude. It is a typical inhabitant of escarpments, meadows and sunny pastures managed extensively. These flower-rich habitats are not only a paradise for orthopterans, but also for countless other animal and plant species.
Unfortunately, since the middle of the last century, the surface and quality of the flowery meadows of our landscapes have been continuously decreasing. The reasons are to be found on the one hand in intensive agricultural exploitation, on the other in the abandonment of pastures. Not to mention the sunny areas prey to the most unrestrained building. For these reasons, in many places the chirping of the rural cricket is no longer heard. Inside a dry and warm meadow, this insect is quite mobile, but as soon as it comes out it quickly reaches its limits. So it happens that today many populations live completely isolated from each other, a condition that makes this species so frequent in itself vulnerable.
Traditionally in the past, it was imprisoned in cork cages and wire in some local festivities connected to the Ascension, to cheer the children up with its song. The Cricket Festival in Florence is the best known. Animal protection and rarefaction of the species have almost extinguished the custom.