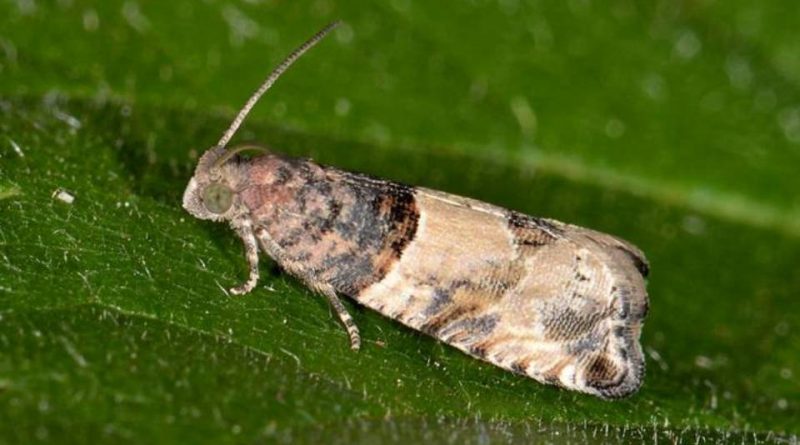 Geographical Distribution and Habitat –
Gypsonoma aceriana is an insect whose larvae feed on Populus nigra, Populus nigra subsp. italica, Populus alba, Populus balsamifera, Acer platanoides and Acer campestre. It is a common species in plantations and poplar nurseries. It is found from Europe to Russia, eastern Turkey and Iraq. It is also present in North Africa. This species has been found in Italy, France, Germany and the Netherlands and in other Asian countries as in Japan.

Morphology –
The poplar shoot-borer is a medium-small butterfly, with a wingspan of 10-12 mm; the whitish front wings; the livery shows a brownish band, in correspondence of the attachment to the chest and with the distal part of the marbled wing. The larvae measure about 10 mm in length and are nutty in color.

Attitude and biological cycle –
The poplar shoot-borer winters at the larval stage inside the apical buds that damages causing the blinding, or in a niche dug under the insertion point of the leaves.
In the following spring the larvae resume their activity reaching maturity towards the end of the same. The flicker of the adults occurs between the end of May and June, giving rise to the first larval generation of the year, active in the summer. In the late July period the adults of the 2nd flight flicker, giving rise to the wintering larvae. The number of generations is thus of two.

Ecological Role –
The damage of poplar shoot-borer manifests itself on the shoots and is determined by the trophic action of the larvae that initially attack the leaves eroding the leaf page; in a second moment they begin to dig tunnels in the central part of the young shoots, causing them to dry out. Because of this attack, the plants react with an early regrowth of the side buds, which makes the tree assume a bundled shape making the young trees of the nurseries unmarketable.
The containment of poplar shoot-borer can be chemical and follows the criteria of guided and integrated struggle.
It should be remembered, however, that the most significant damage occurs in the young seedlings of nurseries on which preventive treatments are planned in the middle of summer, in the presence of the 1st generation larvae.
However, before operating any intervention, sexual traps must be placed to monitor the population. This technique is used to identify the moments of maximum flight, in order to carry out the treatments at the right time, in a correct and rational way and safeguarding the useful entomofauna as much as possible.
For the placement of sexual traps in nurseries it is necessary to wait for the period of mid-May.
The treatments are repeated every 10-15 days, one from the other.
The products to be used for summer treatments are endotherapic larvicides.