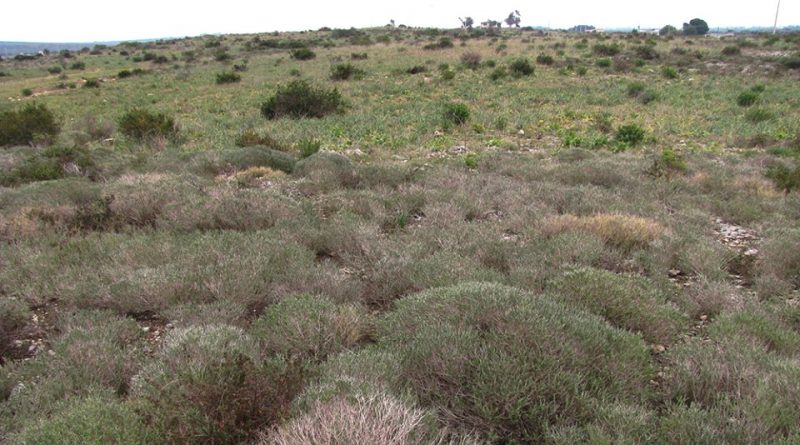 The garrigue represents the first step of the vegetable evolution that ends in the evergreen forest.
The scrubland constitutes, together with the maquis, the main plant association present in the Mediterranean; the garrigue takes different names in the various Mediterranean countries; in Greece it is known as “Phryganà”, in Spain as “Tomillares”, in Palestine “Batha”.
The garrigue is therefore a woody Mediterranean vegetation, xerophytic, consisting of very low evergreen shrubs and suffrutics (rosemary, thyme, broom, dwarf palm, etc.), among which live abundant herbaceous species, often with a rapid life cycle; between the plants spaces without vegetation are interspersed. The garrigue is installed primarily on semi-rocky slopes and, as a result of repeated fire and overlapping, it can reach wide areas.
The abundant presence of the garrigue in the Mediterranean is due not only to the nature of the soil and to the climate, but also to the degradation of the scrub due to excessive human exploitation. This association occurs in stony, steep, sunny and dry soils; It consists of sparse, aromatic, thorny shrubs, with tomentose leaves, covered with fluff; (tricks to withstand the summer drought).
The garrigue is richer in variety than the scrubland because the sparse shrubs leave large spaces where numerous herbaceous species can settle, both perennial (mainly bulbous) and annually.
The garigue is an association that manifests itself in a “thermòfilo” environment, most of its species ending the biological cycle before the great heat; leaving the seeds on the ground for reproduction.
Typical essences of the local garrigue are represented by: thyme, savory, lavender, helichrysum, cistus tomentose, Greek euphorbia, juniper, rosemary and afillante.
Within the general description there is a remarkable variability of manifestations and intermediate states, depending on the different climatic characteristics, the pedological variability of the substrate, the more or less complete ablation of the humiferous layers and, in general, of the different intensities with which the disturbance factors listed above are expressed.

As an element of diversification, the different capacity, exhibited by some genres, in dealing with disturbing factors should not be overlooked; thus some genera are able to offer a more effective response to the action of grazing by chemical repulsion (Cistus or Euphorbia) or physical (very thorny shrubs of the genus Carlina or Eryngium).
Within a similar variety of expressions, we can recognize recurring types that can offer interesting examples of the different communities of garrigue. In the following schematic list, of an illustrative and susceptible type of extension, the denominations are attributed, according to use, with reference to the dominant genera or species; you can have it this way:
– Quercus coccifera needle
– grade cyst
– taste of euphorbia
– helichrysum needle
– broom with broom
– ephedra belt
– asphodel row
– rosemary row
– thyme row
– lavender belt
– sage fluid
– dwarf palm string.
When a territory occupied by the garrigue is “regenerated”, that is to say that every human intervention ends, after a certain time the spot appears; there is a qualitative leap in the evolutionary scale.
In the evolutionary series the bush is the typical Mediterranean flora; this can derive from the regeneration of the garrigue but, in the opposite sense, from the deforestation of the evergreen forest, according to the evolutionary direction.