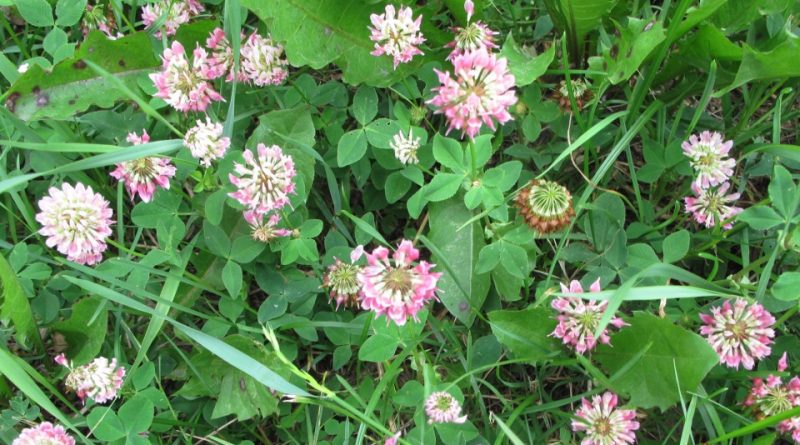 The Alsike Clover (Trifolium hybridum L.) is a herbaceous species belonging to the Fabaceae family.

Systematics –
From the systematic point of view it belongs to the Eukaryota Domain, United Plantae, Magnoliophyta Division, Magnoliopsida Class, Fabales Order, Fabaceae Family and therefore to the Genus Trifolium and to the T. hybridum Species.

Etymology –
The term Trifolium is derived from the prefix tri-tre and from fólium foglia: for the leaves composed of three leaflets. The specific epithet hybridum, comes from bastard, hybrid, cross: of species considered (rightly or wrongly) derived from crossbreeding of different species. In this case the name of this leguminous plant has nothing to do with its possible hybrid origin among the most known and most widely cultivated clover species.

Geographical Distribution and Habitat –
Trifolium hybridum is a species of clover of Scandinavian origin but whose evolutionary history is not known exactly. It is grown as a fodder plant in Sweden since the tenth century. From here it was widespread in Britain in the first half of the last century. At the same time it extends to central and southern Europe and the American continent where it finds its preferred environment in the north-east of the United States and in Canada.
This clover in Italy is cultivated on a small area located in the Veneto in areas of the valley floor or in the mountains, where high rainfall and modest summer temperatures determine conditions suitable for its development. 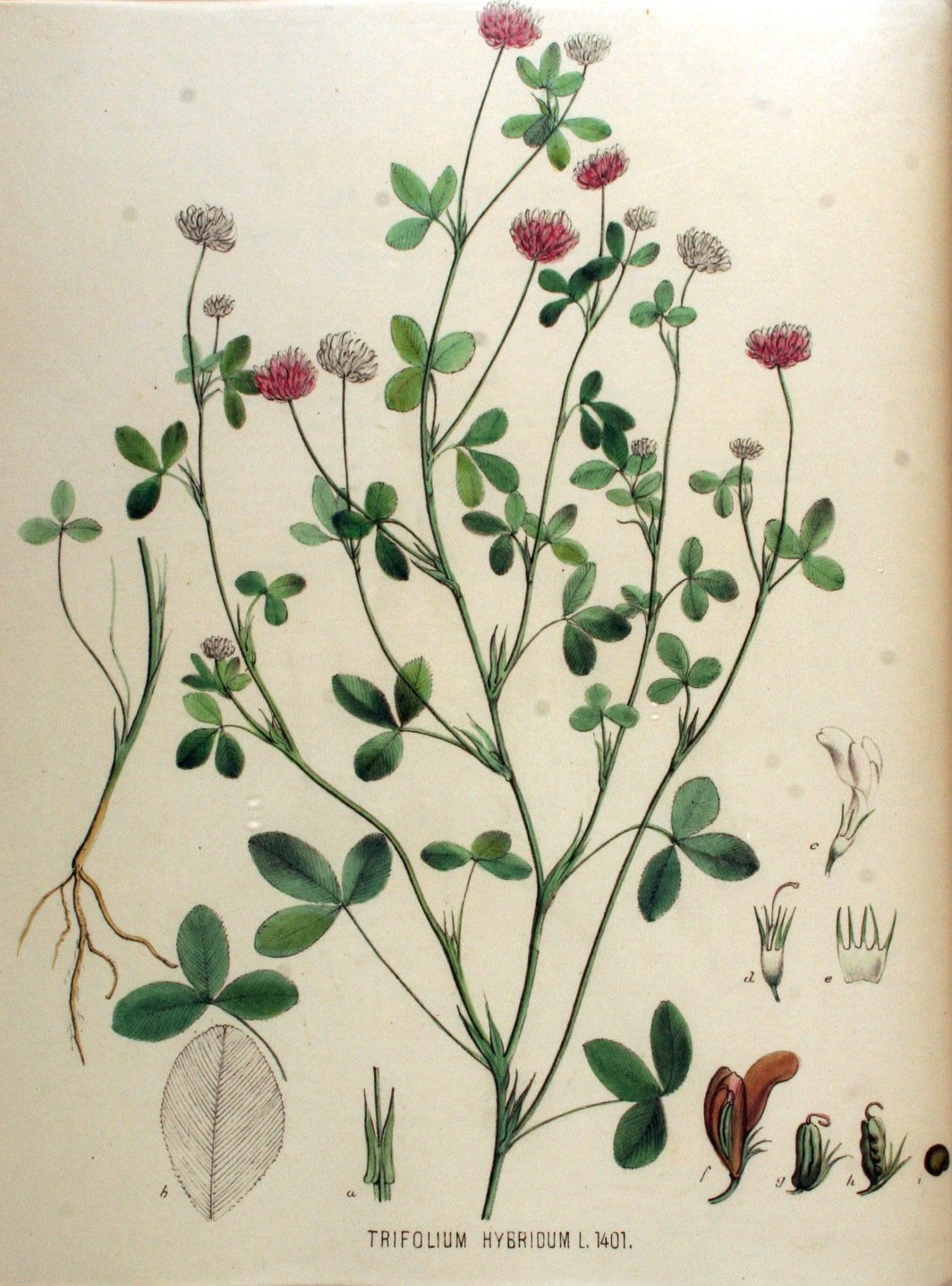 Description –
The Alsike Clover is a herbaceous species with a size of 50-70 cm. it has an extended root system, but less deep than in the pratense clover to which it is instead very similar for habitus of growth and type of development.
As in the Pratense, also the hybrid clover, after germination, forms a crown from which it emits numerous stems of length almost equal to those of the violet clover, but with respect to this, thinner and more prostrate.
The leaves are trifoliate, carried by long petioles characterized by the presence of very obvious stipules that sometimes completely wrap the stem.
The leaflets are intermediate in shape between the pratense clover and the white clover, with a finely toothed margin and no speckles.
The flowers, with petals separated from each other, are gathered in heads of 40-60 elements, of pinkish-white color and carried by long peduncles that develop at the axil of the leaves.
This species is of indeterminate growth; the main axis, in fact, does not end with an inflorescence, but continues to grow and the branches bearing the flowers develop subsequently from each leaf armpit.
The fertilized flowers turn brown and recline, giving the inflorescence an appearance similar to that of white clover.
The hybrid clover is an allogamous and auto-incompatible plant. Fertilization takes place by bees. The ovary contains from two to four ovules which, when fertilized, give heart-shaped seeds, very similar to those of the white clover. As soon as they are picked they are green, yellowish-green but, as they age, they turn black.

Cultivation –
Alsike Clover is a perennial plant with a limited productive life, at most, of 2-3 years.
Because of its Scandinavian origins, the plant is suitable for cultivation in cold climates, and is also very tolerant of soils subject to water stagnation. Its characteristic is that it produces equally well both in acid and alkaline soils, but to obtain these results it requires mild temperatures and an abundance of water. It adapts to pure culture but is also well associated with grasses. It also lends itself to grazing, but cannot give more than one cut a year. In the year of sowing, in colder climates, it hardly produces a hay cut.
However, its ability to withstand rather high values ​​of acidity makes it suitable for organic soils, including peat ones.
In the polyphite meadows it is well suited to the intercropping with the mouse tail with which it shares the high resistance to cold and the tolerance towards even abundant humidity conditions. It is also used in intercrossing with the small grass.
In the monofita meadow the cultivation technique is similar to that of the pratense clover. In this case, 8 to 10 kg / ha of seed are used with the universal seeder and 12-15 kg / ha with broad-grain seeding.

Uses and Traditions –
Trifolium hybridum is a forage species suitable for both cutting and grazing.
In cold and wet climates the hybrid clover has a rather slow emergence, growth and development and rarely in the year of planting it is able to provide a hay cut as it happens in warmer climates. Even from the second year onwards it fails, however, to give more than an annual cut from which 2.5 to 4.0 t / ha of dry matter are obtained whose nutritional value is equal to that of the pratense clover.
For the production of seed the first cut of the second year is used and the harvest must be performed when most of the inflorescences have assumed the characteristic brown color. This implies, as previously stated with regard to the habitus of growth, that the seed that is harvested has significantly different degrees of ripeness and it is therefore advisable to harvest during the least hot hours of the day to avoid losses due to the dehiscence of the more mature fruits. The production varies, depending on the environments, from 200 to 500 Kg / ha.
There are some varieties of which two are currently established in Italy.
Among the cultivated varieties we remember the Canadian variety “Aurora” which is very resistant to cold and good seed producer. In Sweden the tetraploid cultivar “Tetra” was formed which appears to have greater persistence and productivity than diploid types. Even today, however, much of the seed that is used in Italy and abroad comes from the multiplication of more or less selected local populations.

Preparation Mode –
The Alsike Clover is a plant with exclusively forage use and for animal feeding while it has no particular uses in human nutrition or in the pharmaceutical field.