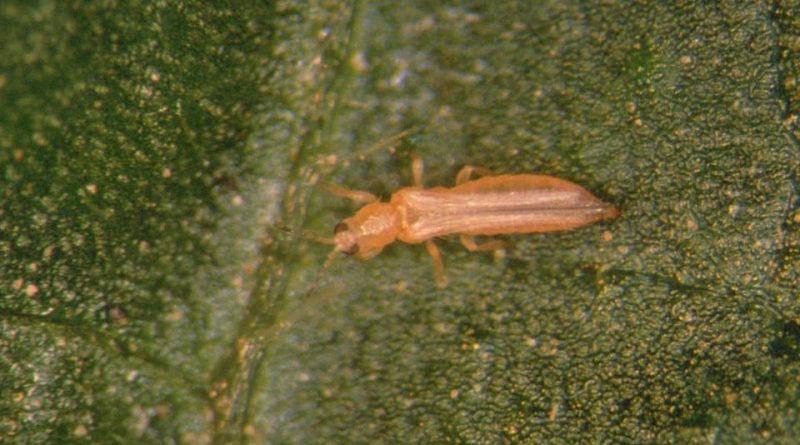 Geographical Distribution and Habitat –
The Frankliniella occidentalis is an insect of North American origin and today present in Italy from the sea level up to the sub-alpine levels.
This insect was present until the 1960s only in the western area of ​​North America, Mexico and Alaska, with the exception of its presence in New Zealand, where it had been reported since 1934.
After the 1960s, with the increase in trade in plant material, the insect was spread throughout the world.
It is currently the most common thrip in California and Arizona and since the 1970s it has also spread to Asia, Africa, South America and Oceania. In Europe, its first presence occurred in the Netherlands, in 1983, in a greenhouse of African violets.
Subsequently the Frankliniella occidentalis was reported in Spain, Scandinavia, England, Germany, France and Italy (1987), where the first sightings took place on ornamental crops.

Morphology –
The Frankliniella occidentalis is a very small thrip whose adults measure about 1 -1.5 mm in length, they vary in color depending on the stage of development.
The spring-summer active forms are ocher-colored, more or less clear, with streaks or darker dots in the dorsal region; the winter forms are brownish. The juvenile stages are very clear.
This insect presents a stage of neanid with 2 stages (neanide of the ages and neanid of II age). The first nymph is initially white or almost transparent, which over time tends to become orange yellow, crimson or even violet. When the nymph reaches the dimensions of 1 – 1.2 mm in length it looks for a repaired and mute cove. Age II nenanide is light yellow in color and measures 1.5 – 1.8 mm in length.
The nymph is characterized by a first stage of preninfa, equipped with wing sketches, rudimentary antennas, functional legs and non-functioning excretory apparatus. When the development of the preninfa is complete the mute insect in the nymphal stage. In this stage there are antennas curved back over the head, wings worked and body similar to that of the adult.
Adults, as mentioned, measure 1 – 1.5 mm in length; the male has a pale yellow abdomen of rounded shape with narrow distal end; the female is instead variable in color from yellow to brown with a more rounded abdomen and pointed.

Attitude and biological cycle –
The Western flower thrip winters at the adult stage, in various ravines, both in the open field and in the structures, internal or external, of the protected crops, or in the ground. This insect resumes its activity at different times depending on the wintering areas and environments.
In hot environments or in protected cultivation the recovery takes place at the end of winter-early spring; in the open field its activity resumes at the beginning of summer. The activity continues until the end of summer or autumn with a number of generations that varies from 6 to 7 per year, in our environments and that in some cases overlap.
Frankliniella occidentalis is characterized by a predominantly reproduction, by parthenogenesis.
The insect colonizes all the plant organs by laying inside the tissues, using the robust ovipositor (terebra).
The host plants are multiple, in fact it can attack 500 plant species of 50 botanical families, in the field and in the greenhouse.
This insect is harmful on vegetable crops (Solanaceae, Liliaceae, Fabaceae, Cucurbitaceae, Asteraceae), fruiting (Drupacee and Pomacee) and floriculture (rose, cyclamen, poinsettia, geranium).

Ecological Role –
The Frankliniella occidentalis carries out its cycle affecting, as mentioned, various plants both in greenhouses and in full field to which it brings both direct damages (punctures on leaves and flowers) and indirect damages (transmission of virosis).
The damage is manifested on all the air organs and is determined by trophic punctures, both of the adults and of the juvenile forms, and by the oviposition.
On the leaves the attack generates silvery-colored depigmentations that tend to become necrotic; because of this there is the deformation of the flap that rolls up and dries up; these alterations are generated by the presence of toxic substances in the insect’s saliva.
The damage deriving from the oviposition is determined by the incision of the terebra and is manifested by suberification and deformation of the tissues involved.
Particularly serious is the damage on the flowers of ornamental plants that is evidenced with depigmentation (sometimes necrotic), more or less scattered on the petals and with lesions to the reproductive organs.
On the fruits, on the other hand, there are lesions or punctures that appear on the outer part of the epicarp which tends to suberify and deform.
It should also be remembered that Frankliniella occidentalis is a vector agent of virosis (Pomodoro).
The containment of this insect is still not very efficient either because it has recently been introduced for which it lacks its parasites and predators.
The chemical struggle against the Frankliniella still presents many difficulties, meanwhile it is difficult to find the mobile forms that normally, during the day, are sheltered in the ground, among the flowers or in other crevices of the host plants, both for the uncertainty of the symptomatological manifestations they are very subtle, not obvious at the beginning but with an explosion of damage, often sudden and with such intensity that they have already compromised part of the product.
The fight against Frankliniella occidentalis must be combined with chemical and agronomic interventions. Both methods must follow the criteria of guided struggle.
The agronomic struggle must be carried out with pruning practices that tend to thin out the canopy, to limit insect swarm avoiding the humidity stagnation that favors it.
Chemical control should only be undertaken in the event of heavy infestation.
Treatments are performed in spring, when the petals fall, and in autumn. It is precisely these two periods, in fact, that are the ones most favorable to the appearance of the insect, as they are months characterized by high relative humidity.
The treatments are carried out when the intervention thresholds are exceeded, as follows:
2-3% of infested fruit trees, on a detection of 20 fruits per plant;
5-10% of infested leaves, on a detection of 4 shoots per plant.
It is possible to monitor the presence of adults by applying blue chromotropic traps, to be positioned 1 every 50 square meters.