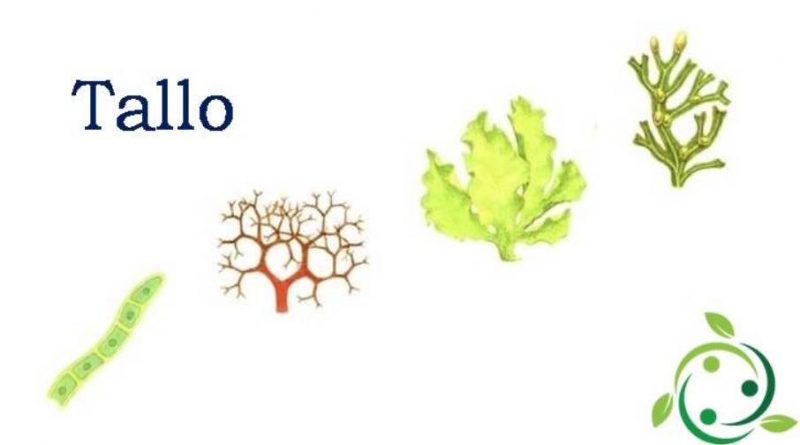 The thallus (from the Greek ϑαλλός: “ramicello”, “fronda”), in botany, is a complex of pseudo tissues gathered in various ways, not differentiated in stem and leaves, and having a very simple structure.
The thallus is the vegetative body of unicellular, colonial or even multicellular organisms. With the term tallo the Acharius (1810) designated only the vegetative body of the lichens; later this name was used to distinguish any type of non-differentiated structure in morphological members and, generally speaking, all the plants provided with thallus were called tallophyte.
The distinction between thallus and corm is not always as easy as for example in some algae.
Plants provided with thallus are the Algae, Fungi, Lichens and Bryophytes (Mosses and Liverworts).

In algae the thallus can be classified into categories based on the complexity that characterizes it:
– coenobium: it defines a colony of aggregation of cells, where the number of the same can vary from a few units 2, 4, or 8 (ex. genus Chroococcus) to many (ex. genus Merismopedia).
– thallus with trical organization: after cell division the cells remain united by plasmodesmata. An example is Ulva lactuca.
– thallus with siphonocladal organization: when the alga is multicellular, but each cell is plurinucleate (eg Valonia and Caulerpa).
– heterotrichous talli: formed by intertwining cellular filaments, as in Coleochaete.
– tallhus cormoidi: in which the complexity is such as to be able to distinguish structures similar to leaves (filloidi), stems (cauloids) and roots (rhizoids).
In mushrooms, different types of thallus are observed, microscopic and unicellular in some Chytridiomycota and in yeasts, while in more advanced mushrooms the thallus is represented by a filamentous mycelium.
In the Lichens the thallus has a very varied structure, formed by an intertwining of mushroom hyphae with algae, intimately united.