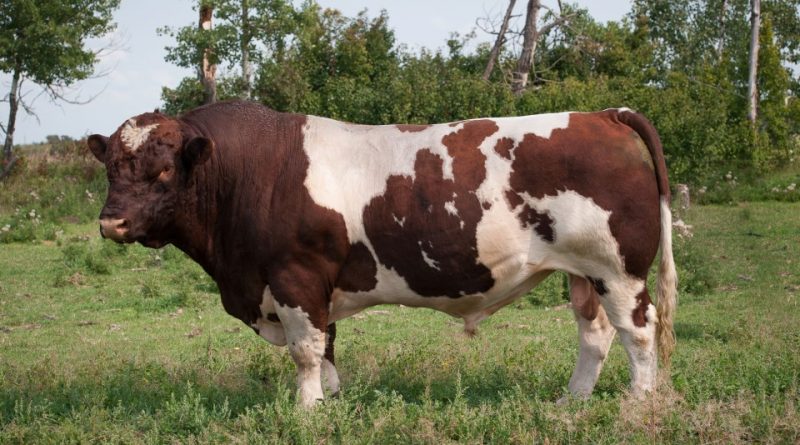 The Maine Anjou breed, renamed Rouge des Prés, is a bovine breed (Bos taurus Linnaeus, 1758) bred mainly in the department of the Loire valley, with dual aptitude for meat and milk production.

Geographical and area distribution –
The Maine Anjou breed is bred mainly in the Pays de la Loire region of northwestern France.
This breed is present however in eight countries of the world, with a total estimated population of around 60000, of which about two thirds are in France. Of these, around 90% are located in the Loire Valley and most of the remainder in the neighboring regions of Lower Normandy and the Poitou-Charentes region. The rest of the world’s third largest population is located in the United States, where registrations began in 1969.

Origins and History –
The Maine Anjou breed was born in the 19th century in Chenillé-Changé, a French commune of 150 inhabitants located in the department of Maine and the Loire in the Pays de la Loire region. Maine Anjou was a large breed of meat from the West, before regressing since the sixties. The breed is native to French Brittany, it was formed in the mid-1800s through the use of Shorthorn bulls on local breeds (in particular on the Mancelle breed). It is considered a dairy and meat breed.
The creation of this breed was due to the work of owners of large estates in the traditional province of Maine; these crossed the local Mancelle dairy cattle with British Durham cattle, the breed that would later become Shorthorn.
The dual-aptitude breed was therefore originally known as Durham-Mancelle. The genealogical book was established in 1908 and the name of the breed was changed to Maine-Anjou. In 2004 the name was changed again with Rouge des Prés, but outside of France the old name is still used. Starting from about 1970, the farms turned towards the production of meat compared to dairy use.
Maine Anjou is a bovine breed that is better suited to an extensive production system than to the intensive ones that have been in existence since the 1960s. The breed has also been devalued in the markets due to its yields, lower than those of specific breeds for meat production.
In 2000 the breed had 57,000 heads, against the 157,000 of 1969. More than half of the current breeders will not have successors and the survival of the breed is therefore endangered.

Morphology –
Maine Anjou is a large breed (often over 450 kilos in carcass) from which abundant quantities are obtained.
The animals are characterized by a red coat with white spots, but can also be roan like the Shorthorn.
They are of good conformation, with medium-high and heavy subjects: the females are 140-145 cm and 750-850 kg.

Production aptitude –
Maine Anjou is a breed with a good balance in the milk / meat ratio. The meat is considered excellent, aromatic, tender and velvety to the taste.
Its meat is suitable for consumption of traditional dishes of boiled or grilled meat.
In general it is a robust and long-lived breed, prolific with a relatively high percentage of twin births (6%).