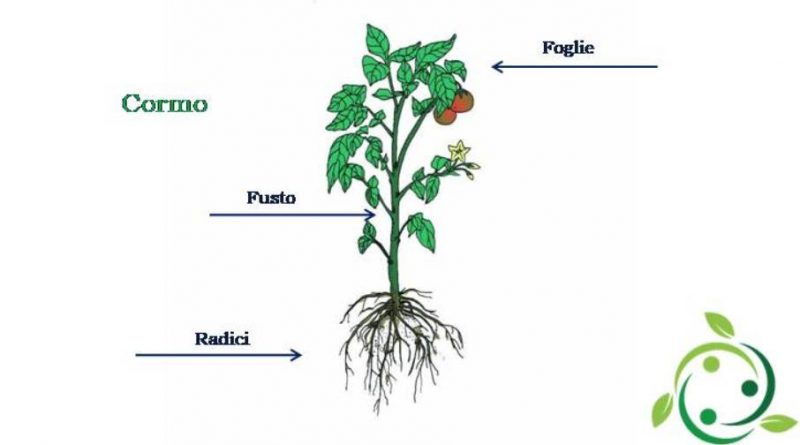 The corm is the morphological complex of the most differentiated plants, in which the distinction of the three fundamental morphological members: root, stem and leaf, is complete.
For some authors the corm would be equivalent to the epigean part of the plants, stem and leaves only, but has entered into the use of attributing to the word cormo a much more general meaning, meaning the whole organic complex (root, stem and leaves) of the higher plants , therefore also called Cormophytes, which include Pteridophytes and Spermatophytes or Antophytes.
In the corm the cells exhibit marked morphological and functional differentiations in the context of tissues.
A characteristic element of cormophytes is the presence of differentiated tissues for the transport of liquids over long distances, in particular the raw sap from the roots to the leaves.

For this reason cormophytes are also vascular or tracheophyte plants.
In single-celled plants, where there is no organ differentiation, the body of the organism is instead called tallo.
In any case, the existence of a thallus type body does not exclude the presence in particular cases of differentiated fabrics. For example, in large brown algae the thallus can take on a cormoid shape, where a rhizoid, a cauloid and a frond can be distinguished. In these cases, a tissue is differentiated by the conduction of the elaborated lymph containing the photosynthesis products from the frond to the rhizoid. This fabric is in many ways very similar to the crystalline fabric of higher plants.
Due to the absence of highly specialized tissues for the transport of raw sap and proper organs, bryophytes (mosses and liverworts) tend to be excluded from the group of cormophytes. Although the body of these organisms may present similarities with the organization of the corm, it will more properly be considered a thallus. These aspects, however, fall into themes that are still debated and that do not find unanimity of view among scientists.