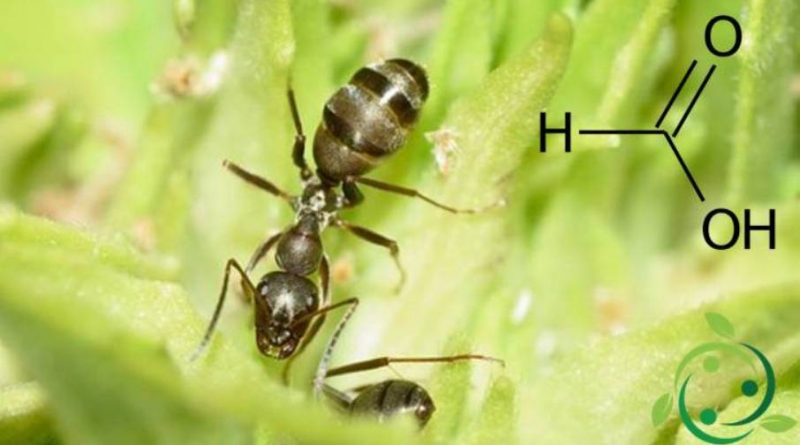 The formic acid whose name in the IUPAC nomenclature is: methane acid has a brute or molecular formula: CH2O2.
Formic acid is the simplest of carboxylic acids and forms salts that take the name of formates.
The name of formic acid comes from the word ant. The naturalists of the fifteenth had already noticed that certain types of insects (the formicides), such as ants, termites, bees and beetles, secrete this compound responsible for their painful bites. Furthermore, these insects use formic acid as a mechanism of attack, defense and chemical signaling.
Formic acid is a colorless liquid with a pungent smell, it is corrosive and, if kept in contact with the skin, it causes burns, destroying the entire thickness of the skin tissue. It is miscible in glycerol, ethyl acetate, methanol and water; it is very soluble in acetone. It is a strong reducing agent.
The first production of formic acid occurred in 1670 from the destructive distillation of ants.
Formic acid is used primarily as a preservative and antibacterial agent in livestock feed.

Steamed on hay or other forages, it stops some fermentation processes. In the poultry industry it is sometimes added to feed to eliminate salmonella bacteria.
It is classified as a food additive with the code E 236.
Formiati, which are called salts derived from formic acid, are used instead in the textile, paper, rubber, plastic and leather tanning industries. Some of his esters find use as artificial aromas and as perfumes.
In beekeeping it is also used in the fight against Varroa destructor but the difficulty and danger of administration limits its use.
In nature, some birds, including the crow and the jay, heavily provoke ants, which in an attempt to repel the molester spray them against formic acid. This practice is known as anting or ant bath. The bird uses acid to get rid of parasites.