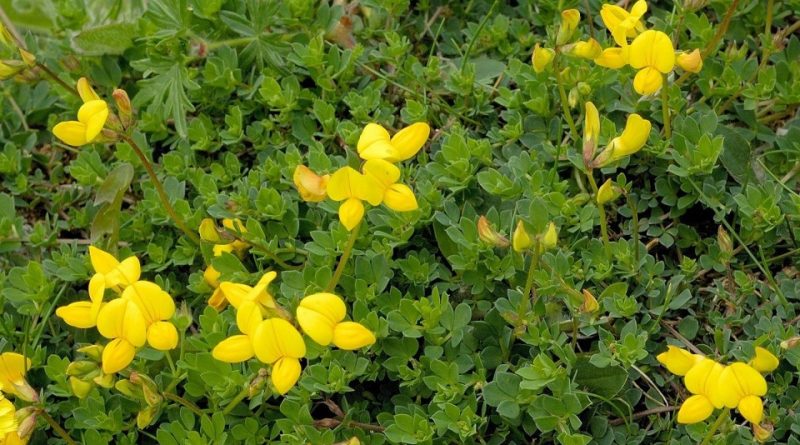 Systematics –
From the systematic point of view it belongs to the Eukaryota Domain, United Plantae, Phylum Magnoliophyta, Magnoliopsida Class, Fabales Order, Fabaceae Family, Faboideae Subfamily, Loteae Tribe and then to the Lotus genus and the L. corniculatus Species.

Etymology –
The term Lotus is the Latin name of a variety of clover mentioned by Virgil. The specific epithet corniculatus comes from diminutive corniculus of cornus horn: with small horns, due to the shape of the fruits.

Geographical Distribution and Habitat –
Birdsfoot Trefoil is a herbaceous species probably originating from the Mediterranean basin where the genus Lotus is characterized by great variability of forms. The broom is present in Europe (where it is present in all countries, from Iceland to Greece, and in Italy in all regions), in Asia and in North Africa but today it is also naturalized in North America and in other parts of the world. 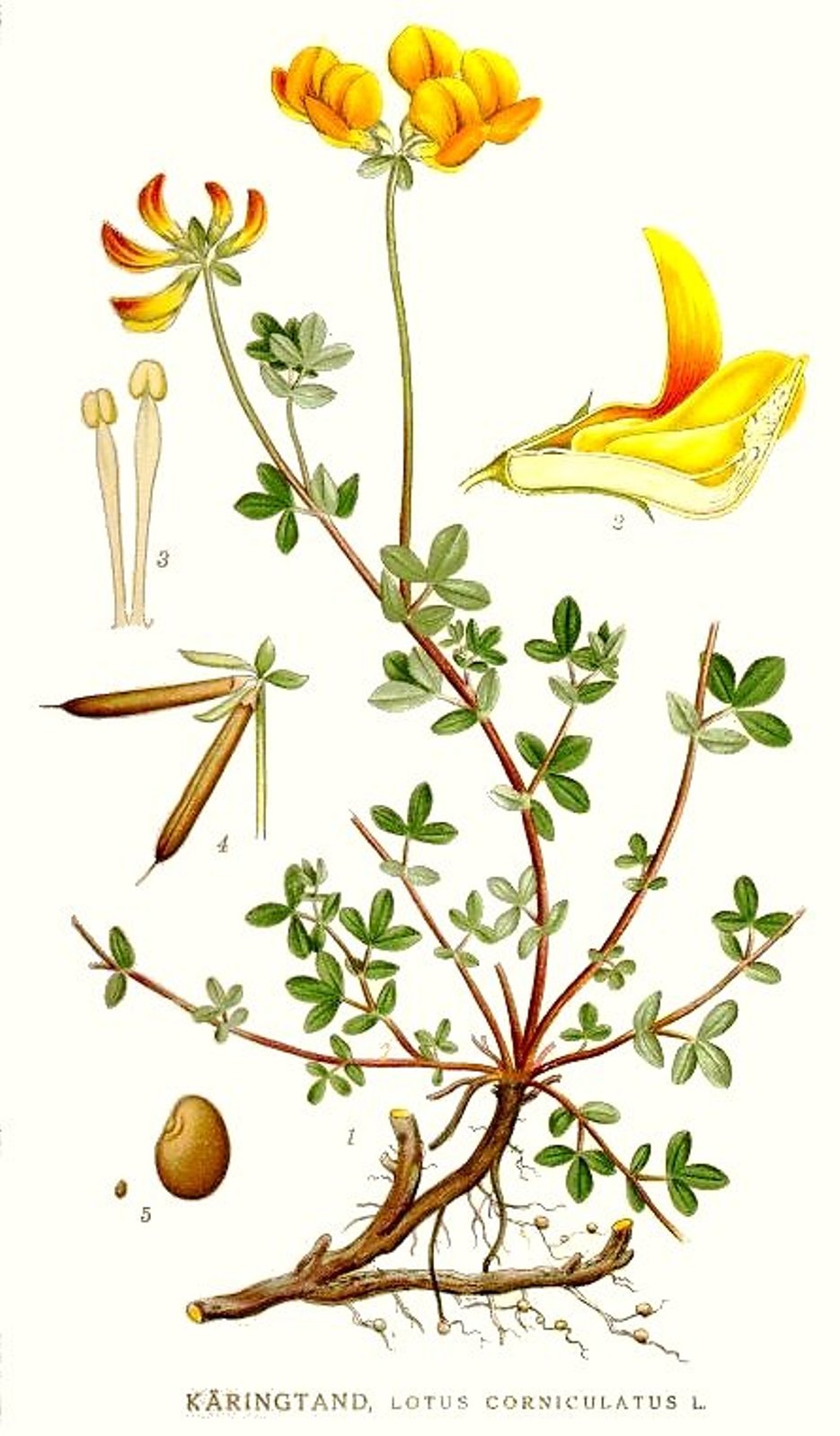 Description –
Lotus corniculatus is a perennial herbaceous species with a full and curved stem at the base, high from 10 to 30 cm and even more. The root system is tap-shaped and robust, rich in tubercles.
It has leaves, composed, divided into three rhomboid leaflets. The flowers are yellow, gathered in small umbrellas of 2-7 elements and bloom in the period from May to August.
Pollination is entomophilous and is guaranteed by various species of Hymenoptera. Although cross-fertilization normally occurs and there is a self-incompatibility mechanism, self-fertilization is possible. The chromosome number is 2n = 24.
From fertilization legumes are formed, thin and cylindrical, of brownish color, easily dehiscent, containing 10-20 round seeds.

Cultivation –
The Birdsfoot Trefoil is a plant that adapts well to very different climatic and soil conditions. This species resists the excesses of soil moisture better than the medical one and at the same time is characterized by considerable resistance to dryness, so as to be able to provide, even in less than optimal conditions, a good summer production. A thermal limits similar to those of the medical one and tolerance towards a certain acidity of the soil, which makes the species suitable to be cultivated in organic soils, even of mountain. The optimal pH values ​​are around 6.5.
In cultivation, the broom is rarely used for the installation of monolith meadows, more often it is found as a component of mixtures for politite lawns. The duration of the pure grass is usually 2-4 years, but it can vary according to the needs of rotation.
Characteristic of the Birdsfoot Trefoil is that it has a very slow development and is also sensitive to competition. The quantities of seed fluctuate between 10 and 20 kg / ha depending on the conditions in which one operates; normally they are 12-15 Kg / ha for the single-grain lawn sown on bare ground and 15-20 Kg / ha when it is planted in the winter cereal.
In pure culture, in the first year 1 cut (dry) or 2 (in irrigation) with average yield in s.s. for 2-3 t / ha cutting. In the following years, 3-4 mowing is possible with a total production of 6-7 t / ha of s.s. in mountain environments and 10-11 t / ha in lowland irrigation environments.
A characteristic of the Birdsfoot Trefoil is its easy dissemination which, on the one hand is a drawback because it makes the commercial production of the seed difficult, on the other it is advantageous because it helps to ensure a certain renewal of the stand, and therefore its long duration.
Within the species different types are then identified:
– nano or grazing type;
– erect type with narrow leaf;
– erect type with broad leaf (typical form).
In Italy we find 9 typologies listed in the Variety Register, 8 of which were recently introduced.

Uses and Traditions –
Birdsfoot Trefoil is an ancient forage species; in fact it has been cultivated since the 18th century.
News on the fodder value of the gorse has been around since the 1700s, but it is only between the end of the 1800s and the early 1900s that it began to be cultivated, first in England and then, gradually, in the rest of Europe.
The use can be the hedging, the silage or the pasture.
With regard to use as a pasture, it should be noted first of all that, unlike the medical one, the broom does not give rise to meteorism phenomena. Secondly, it should be kept in mind that even in the broom there are individuals, in a variable percentage depending on the populations, able to release HCN. However, there is no knowledge of poisoning phenomena by the animals following the intense grazing of sow seeds.
The bramte hay is fine and aromatic and is usually very appetizing if obtained with mowed fodder just before flowering.
In Italy the following subspecies are present:
– Lotus corniculatus subsp. alpinus (DC.) Rothm. It is distinguished by being small in size with <10 cm stem, 1 ÷ 3 (5) flora; – Lotus corniculatus L. subsp. corniculatus. It is distinguished by flower heads generally 2 ÷ 7 flowers, calyx with subequal teeth between them, as long as the tube; – Lotus corniculatus subsp. delortii (F.W. Scultz) O. Bolòs & Vigo. It is distinguished by calyx with short teeth, the upper and lateral curved; – Lotus corniculatus subsp. preslii (Ten.) P. Fourn. It is distinguished by calyx with long teeth 1.5 ÷ 2 times the tube. Similar species is the Lotus pedunculatus Cav. Which stands out for more straight stems, tubulose ± glabrous, leaves and stipules decidedly larger, richer inflorescence 5 ÷ 12 larger flora, green pods and star-shaped. Species of damp and peaty meadows. The main constituents contained in the broom are: flavonoidic and phenolic glycosides, cyanogenetic compounds, hydrocyanic acid. It is an antispasmodic, sedative, astringent, antiseptic and emollient plant. It is used in case of insomnia, dysmenorrhea, bronchitis. In phytotherapy the plant is used as a cardiac tonic. It would seem that the properties of the Lotus cornuculatus, have been studied by the naturalist and mathematician Georges-Louis Leclerc (1707 ÷ 1788), count of Buffon, after one of his patients, mistakenly using it instead of Melilotus, would have obtained a marked improvement of his nervousness . From Birdsfoot Trefoil it is also possible to extract a yellow dye and it is also a discreet mellifera plant.

Preparation Mode –
Lotus corniculatus is a forage species that has no uses in the human food field, while there are many pharmaceutical applications.