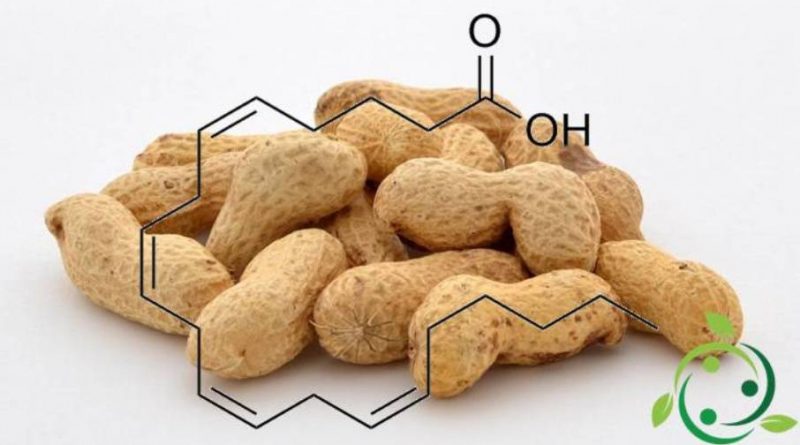 Arachidonic acid whose name in the official IUPAC nomenclature is eicosa-5Z, 8Z, 11Z, 14Z-tetraenoic acid and whose brute or molecular formula is: C20H32O2 is a poly-unsaturated fatty acid, which means that it carries more double carbon-carbon bonds and which, in particular, has four all cis configurations.
Arachidonic acid is an omega 6 that is present in the human organism and that is taken through the feeding through, for example. peanut oil or organic synthesis from linoleic acid which is an essential fatty acid omega 6, present for example in hemp oil or cannabis and in sunflower oil.
Arachidonic acid is also present in good quantities in breast milk (more than twice as much as cow’s milk) and it is not by chance that it is considered an important nutrient for the good growth of the fetus and the newborn. In particular it has proved to be very important to promote the child’s nervous and intellectual development (an action shared with omega-three fatty acids).
Arachidonic acid is therefore widely distributed in nature and in particular in foods of animal origin such as eggs, fish and meat; alternatively it is synthesized by the body, as mentioned, starting from linoleic acid.
The origin of arachidonic acid from endogenous synthesis is a minority, while the contribution of nutrition is rather high, especially in industrialized societies. For this reason arachidonic acid is to be considered a semi-essential fat, indispensable when sufficient quantities of linoleic acid are not taken.
In the human body, the highest concentrations of arachidonic acid are recorded in the muscle and brain tissues.
Inside the cells it is bound to membrane phospholipids (phosphatidylinositol, phosphatidylcholine, phosphatidylethanolamine), that is in that phospholipid double layer which – by distributing itself on the outer surface of the cells – regulates the entry and exit of the various cellular metabolites (nutrients, hormones , waste substances, etc.).

Arachidonic acid is released from the phospholipid molecule by means of the enzyme phospholipase A2, which thus returns the monoglyceride phosphate and a molecule of arachidonic acid. A second minority pathway for the release of arachidonic acid is that which occurs with the cleavage of diacyl glycerol phosphate (DAG) previously originating from the cleavage of phosphatidyl inositol diphosphate PIP2 by the Gq protein.
Arachidonic acid is also a precursor in the synthesis of eicosanoids. This organic acid, through the action of the enzyme cyclooxygenase and peroxidase, gives rise to prostaglandin H2, which in turn is transformed into different substances including prostaglandins – involved in inflammatory processes and in many physiological functions including the protection of the gastric mucosa – prostacyclins, and thromboxanes.
Since inflammatory processes are involved in many morbid conditions (rheumatoid arthritis, chronic ulcerative colitis, lupus, pelvic inflammatory disease, atherosclerosis, etc.), we have studied dietary strategies able to reduce the synthesis of pro-inflammatory prostaglandins in favor of those with anti-inflammatory action. For this purpose it is advisable to reduce the consumption of vegetable oils and fatty meats, in favor of fish and some particular oils, such as flax and hemp. It is also advisable to prefer lean dairy products and to limit the consumption of eggs, especially of the yolk; at the same time these protein sources should be replaced on at least a couple of weekly occasions with legumes like lentils, chickpeas, beans and soy-based products. In this way it is plausible that greater amounts of eicosapentaenoic and docosahexaenoic acid (omega-three) are incorporated in the membrane phospholipids instead of arachidonic acid. In the presence of a phlogistic imput the inflammatory response would therefore be less violent.
Even obesity is a condition heavily associated with a chronic inflammatory state of the body, so in these cases a low-calorie diet can be indirectly considered anti-inflammatory.
Recently the nutritional importance of arachidonic acid has been widely re-evaluated in the sports field, to the point that today it is marketed as a supplement designed to maximize muscle growth in subjects who perform intense muscular activity.