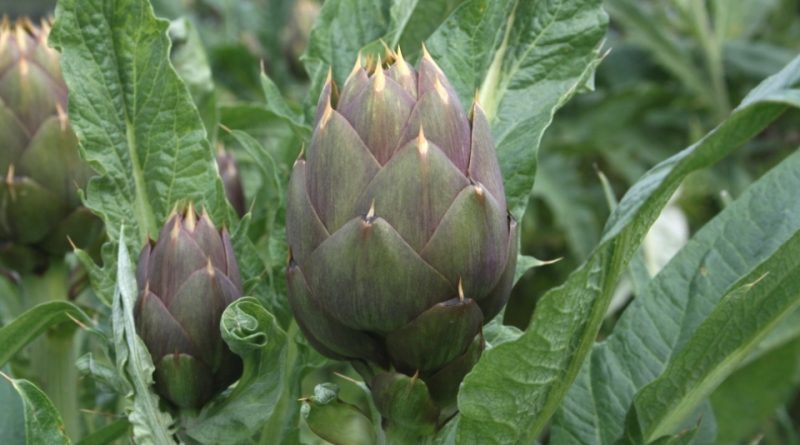 The Spiny Artichoke of Menfi is a traditional agri-food product (PAT), recognized by the Sicilian Region and by the Ministry of Agricultural Policies and Slow Food.

Origins and History –
The spiny artichoke of Menfi is an ecotype of the species Cynara scolymus L. of ancient traditions of which we know at least from the nineteenth century, in which the land dedicated for its cultivation extended from the Carboj river to the current Foce del Belìce Nature Reserve.
But its origin is lost with the history of Selinunte, among the hills overlooking the sea of ​​Africa in the south-west of Sicily, where the Greeks celebrated the local spontaneous flora by baptizing Selinus their most western colony, from the name of celery. water, in Greek selinon, which grew there profusely. Not far from the Selinuntine ruins, the domestication of another spontaneous plant, the Cynara cardunculus var. Sylvestris, also known as wild thistle, gave birth to one of the oldest artichoke populations in the Mediterranean basin: the thorny Menfi.
But the spiny artichoke of Menfi has characterized this territory in the past and this landscape so much so that, during his trip to Sicily in 1787, even Goethe wanted to immortalize him in the act of eating raw artichokes: “but he wanted to say that here they are much more tender, and taste much more exquisite than with us ”. In an essay dated 1911, dr. Gaspare Murania, Director of the Professorship of Agriculture in Castelvetrano, wrote: the cultivation of the artichoke is very ancient and has a great importance from the economic-agricultural and commercial point of view. It is found cultivated everywhere in the gardens, next to the farmhouses, along the avenues of the vines etc. .. Near the town abound small farms, specialized in this cultivation: they employ hundreds of arms and feed an active trade in the country for the great export of artichokes in the Girgenti, Trapani and above all Palermo markets.
Today this ecotype is grown within a wider area of ​​artichoke cultivation which, at present, is over 600 hectares. Today, however, this historical ecotype has to face competition with the hybrids of other artichoke varieties that are three, four times more productive, so much so that the Menfi spiny artichoke is now cultivated with a small extension of about 10 hectares.
In fact, a spiny artichoke plant from Menfi produces an average of 1/3 of the heads produced by an allochthonous plant and this has led to a gradual abandonment of the variety with the use of genetic material that is more productive and internationally recognizable. For over a thousand hectares in the 70s, the few decades of the current years have come and hence the strong risk of genetic erosion that led to the proposal to establish the garrison.
Among other things, over the years in Menfi the artichokes have given way to vineyards and, in addition, for about 30 years the new hybrid varieties have undermined the old thorny ecotype and today few companies still cultivate it. The spiny that are found on the market are often not really the traditional ones (we recognize the traditional fakes because they are larger, and of a violet less intense than the spiny of Menfi). The thorny market has remained local but is also found on some stands in Palermo.
To ensure the survival of this product some producers of Menfi have decided to resume the cultivation of traditional thorny, coming together in an association and have started to look for new markets, not only for the fresh artichoke but also for the pickles.
Furthermore, every year the farmers of the garrison provide propagation material for other interested farmers, thus trying to encourage the cultivation of the thorny.
The objective is obviously to affirm the quality of this artichoke, to safeguard it and to increase the cultivated surfaces so that it does not get lost, find new markets and try to avoid, by producing high quality preserves, to sell off the artichokes when the market is flooded with other varieties.

Geographic area –
The thorny ecotype of this artichoke is grown in a production area that includes the Municipality of Menfi, Montevago, Santa Margherita Belìce, Sciacca and Sambuca, in the Province of Agrigento and the Municipality of Selinunte, Castelvetrano and Partanna in the province of Trapani. It is a very large area but with small productions that should instead be encouraged with specific programs to prevent a further genetic erosion that would cast doubt on the genetic future of this ecotype. It is a territory characterized mainly by clayey soils and red earth typical of this area largely falling between the Belice river and the Carboj.

Raw material –
The spiny artichoke of Menfi is an autumn variety, of which the first flower heads, called mammas, have an ellipsoidal shape, while the latter, called spaddi, are ovoid.
The spiny artichoke of Menfi, progenitor of the cinaricoltura of the southern Sicilian coast, is the closest genetically to the spontaneous artichoke. It is part of the large family of spiny artichokes (some ecotypes are renowned in the province of Palermo, some in other municipalities in the province of Agrigento), characterized by limited but high quality production.
The nutritional properties of the artichoke include an almost absent greasy component, a low protein concentration and about 10% of carbohydrates, all accompanied by a good dose of mineral salts and inulin, a prebiotic fiber able to favor the proliferation of “good” bacteria “In our intestines.
But the artichoke contains other substances, which from a nutritional point of view are not fundamental for our body, but on the other hand carry out important healing activities. The substance in question is Cinarina, a polyphenol (natural antioxidants, present in the plant kingdom, produced by the secondary metabolism of plants) derived from caffeic acid (also a natural substance, with weak anti-inflammatory effect), with which it is bound .
Cinarina has cholagogue and choleretic effects, that is, it is able to promote liver functions, in particular in the production and transport of bile, resulting particularly useful to those who suffer from dyspepsia. It also performs a cholesterol-lowering action, inhibiting the biosynthesis of cholesterol and its oxidation (a phenomenon that makes cholesterol particularly harmful to the cardio-circulatory system).
In this regard, a German scientific study showed that the administration of 1.8 grams of artichoke extract reduced the total cholesterol value by 18.5% compared to 8.6% of those who had not taken the extract of artichoke. Furthermore, bad cholesterol had undergone a 4-fold reduction, while triglycerides and good cholesterol had not changed.

Description –
The spiny artichoke of Menfi is a medium-sized artichoke compared to the other autumn varieties, the bracts, that is the edible part of the artichoke, have a green base color and a violet color, in the upper part there are large golden spines. For this characteristic in the past it was also known as “spinel”. The thorns represent an obstacle on the market as they require a little patience in the kitchen, but the presence of this small “inconvenience” is extremely balanced by other excellent qualities: it is in fact an aromatic, crunchy, delicate artichoke.
It is in fact much sought after for grilling, and also for the production of pickles, caponate and paté. Its high lignin content makes it more resistant both to oil preservation (it remains crunchy and does not flake easily) and also more resistant to the intense heat of the embers.

Production Mode –
For the production of this artichoke, even if in irrigation, it should be considered that these artichokes need little water and need a lower intake of nutritive elements; they are rarely fertilized with manure.
This cultivation often enters into rotation with leguminous plants, especially broad beans, which again enrich the soil with nitrogen.
The qi harvesting of this artichoke is done manually from the end of November until the end of April.
Once harvesting is over, all that remains as crop residue is ground. Trenching the dry part of the plant makes it easier to recover the best eggs, which have been previously marked with the color at the base of the logs. Traditionally the end of the production season is May 1st, when these farmers find themselves in the countryside roasting the last artichokes cooked over embers fed with the remnants of olive tree pruning.

Gastronomic Use –
The spiny artichoke from Menfi, due to its high content of lignin, is very suitable for both oil conservation and the intense heat of the embers. For this last preparation, the artichoke, before being put on the grill, is used to beat it with all the thorns on a marble base to favor the opening of the bracts and then dress it with extra virgin olive oil, salt and garlic.
In the kitchen it lends itself to various preparations: as said on the grill or stewed, fried or raw on its own or in salads, transformed into preserves or pates.
Local extra virgin olive oil is always used for preserves and the result is exceptional.