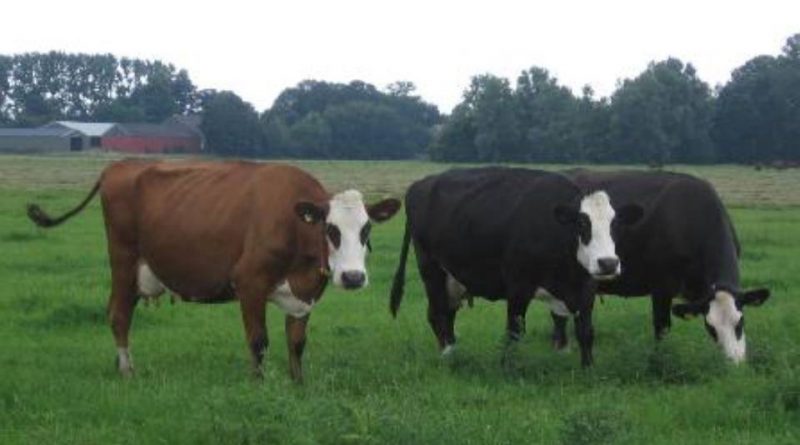 The Groningen Whiteheaded, is a bovine breed (Bos taurus Linnaeus, 1758) native to the province of Groningen in the north of Holland, with a dual aptitude for the production of meat and milk.

Geographical and area distribution –
The cattle of the Groningen Whiteheaded breed have been bred for a long time, in an area that corresponds to the provinces of Groningen, in the South Holland near the cities of Leiden, up to the area close to the city of Utrecht .
In addition to being bred in purity in Holland, where in 1990 it represented 1% of the bovine population, it was also exported to England where it contributed to the formation of Hereford, which is also characterized by its white head.
Indeed in the fifties 5% of the bovine population in the Netherlands was Groningen Whitehaded. In 1965-1970 the number was reduced to 2% and, subsequently, after 1980 the number of these leaders decreased even more.

Origins and History –
The Groningen Whiteheaded, which in the local name is known as Groninger Blaarkop or Zwartblaar, is a Dutch breed known for centuries. Evidence of the breeding of this breed can be found in paintings dating back to the Middle Ages.
It is a breed originating from the province of Groningen in the north of the Netherlands whose traces seem to have been lost as far back as 1344.
This breed originated over time from the ancient local Frisian cattle with the use, in the second half of the nineteenth century, of the Shorthorn.
Originally Groningen Whiteheaded had a greater aptitude for meat production; subsequently, following improvements, milk production was improved to the point of becoming the prevailing attitude.

Morphology –
The Groningen Whiteheaded is a bovine breed with a red coat color, in 80% of the cases, or black, in the remaining 20%, with a white head with spots around the eyes and white parts in the ventral regions and extremities of the limbs. The muzzle is black and the horns are short.
These are medium to high animals; the females have a height, at the withers, of 130-135 cm and a weight of 550 kg, while the males measure about 145-150 cm and weigh about 850 kg.

Production aptitude –
Groningen Whiteheaded is a dual-purpose breed with 60% milk production and 40% meat production.
The average milk production is around 6,000 – 6,000 kg / lactation, with 4.1% fat and 3.5% protein.
It is a strong, robust, somewhat rustic breed with strong, slender limbs and robust hoof.
Other strengths of Groningen Whiteheaded are its longevity, low health cost, high fertility rate and good economic yield resulting from its breeding.
It is also a good cow to use in organic farming systems.
It is precisely in this direction that there is great interest in this breed, given the need for more sustainable and natural production models.