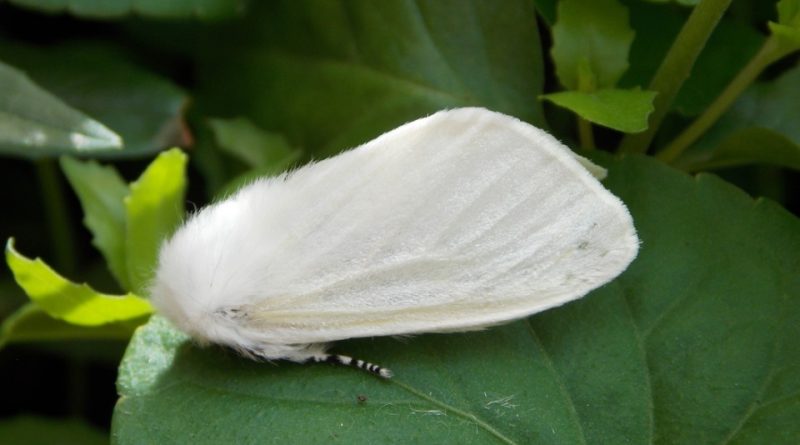 Geographical Distribution and Habitat –
The White Satin Moth is an insect with distribution over most of the globe. It is found in Europe, including the British Isles, but not in the far north. We find it in the areas of eastern Asia, through central and eastern Siberia (excluding north-eastern Siberia), Mongolia, Korea, China, and Japan. It is present in North America, where it was introduced in the 1920s.
This insect lives in shady and damp places, such as the edges of forests and hedges, together with agricultural cultivations, but also in avenues, parks and gardens, while larvae feed on plants of the genus Salix and Populus.

Morphology –
Leucoma salicis is characterized, in the adult form, by a butterfly of about 37-50 mm of wingspan, completely white in color. The larvae, about 50 mm long, have a particular appearance: they are dark in color with white circular-oval spots on the back. On the back and on the lateral parts they also have rows of red tubercles from which tufts of light hairs branch off.
The pupae are recognizable by the presence of a cocoon between the leaves, and is shiny black with white spots and yellow hairs.

Attitude and biological cycle –
Leucoma salicis is a moth that spends one or two generations a year and spends the winter wintering at the egg stage, in greenish oviplaces covered with silky secretions and whitish hairs; the eggs are laid both on the rind of the trunk and on the branches.
In some climatic conditions the eggs that were laid at the end of the summer hatch in the same year, so that the larva of the wintering insect is hibernating and protected by silk threads inside the bark of the host plants.
However wintering occurs the larvae begin their activity between the end of March and April of the following spring, feeding on leaves. At maturity, the larvae become unstable between the vegetation and, subsequently, between June and August, there will be the flicker of the adults who thus make the first generation.
In climatic conditions, precocious wobbling may occur (between June and July) with a second generation, with larvae activity in the summer period, and with the relative adults who at the end of the summer will give rise to the wintering forms.
The males of this moth are already beginning to fly before dusk and are often numerous, like snowflakes, around poplars and willows.

Ecological Role –
The White Satin Moth is a moth whose main host plants are willow and poplar.
The nutritional activity of the larvae, to the detriment of the leaves of these plants; they first erode the leaf edge and then come to nourish themselves also with the ribs. When infestations are high, serious defoliation can occur which can lead to stress in affected plants.
In the case of heavy infestations it may be necessary to intervene with specific products, allowed in the biotechnological and biological fight. This type of struggle makes use of biological and biotechnological products, recorded on the Poplar, such as: Bacillus thuringiensis ssp. Kurstaki, which demonstrates good activity against larvae and also by chitin-inhibitory development regulators, which have blocking or inhibiting activity with regard to embryonic evolution or young larvae.
The intervention with chemical products must also be the last resort, in the case of heavy infestations, and are performed on juvenile larval stages. In any case, these interventions must be performed through a prior monitoring of the stage of insect populations present in order not to damage the useful entomofauna.