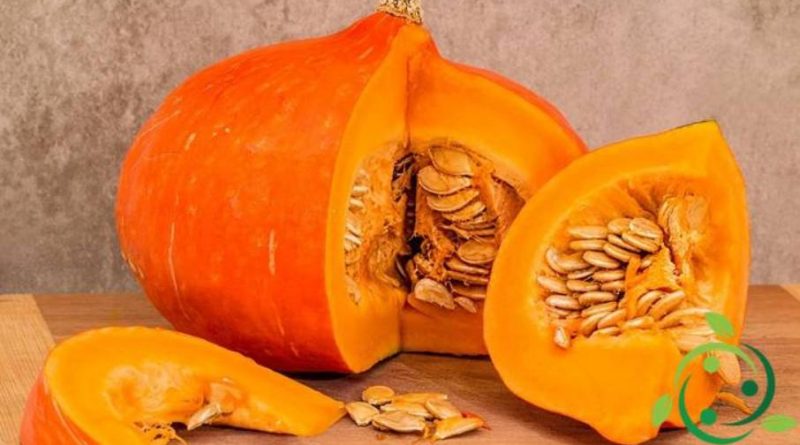 Pumpkin seed oil is an oil obtained from the cold of the pumpkin seeds (Cucurbita pepo L.).
It is a seed oil widely used also in the culinary field; moreover, pumpkin seed oil is known for its beneficial properties which justify its consumption.
The chemical composition of this oil obviously varies with the varieties, the botanical species from which the seeds are obtained and also the cultivation techniques and the pedoclimatic characteristics in which the pumpkin plants are grown.
Below are the average values ​​of the acidic composition on some varieties of Curcubita maxima: there is a clear predominance of unsaturated fatty acids (73.1-80.5%), especially in terms of oleic and linoleic acid; the levels of linolenic acid (<1%) are particularly low, so it is not rich in omega three in pumpkin seed oil.
The average values ​​found are: Myristic acid 0.09-0.27, Palmitic acid 12.6-18.4, Palmitoleic acid 0.12-0.52, Stearic acid 5.1-8.5, Oleic acid 17.0-39.5, Linoleic acid 18.1-62.8, Linolenic acid 0.34-0.82, Arachidonic acid 0.26-1.12, Gadoleic Acid 0-0.17, Behenic Acid 0.12-0.58.
As for saturated fatty acids, those with the highest cholesterogenic action, ie myristic and palmitic, range from 12.8 to 18.7%. Also interesting is the content of vitamin E (27.1 – 75.1 mcg of alpha-tocopherol per gram of oil; 74.9 – 492.8 mcg of gamma-tocopherol per gram of oil; 35.3 – 1109.7 mcg of delta-tocopherol per gram of oil).
Due to these characteristics, the pumpkin seed oil has similar characteristics of other vegetable oils, more common and less expensive, such as soy and peanut oils, although the richness in oleic and linolenic acid, and the good content in vitamin E , give to the pumpkin seed oil bland lipid-lowering and preventive properties against atherosclerotic diseases, probably enhanced by the richness in phytosterols.

Among the beneficial properties derived from the use of pumpkin seed oil we recall that pumpkin seeds are particularly rich in betasterols, substances structurally similar to androgens and estrogens and that are also found in the oil obtained from the pressing of seeds of pumpkin. Due to the presence of betasterols, pumpkin seed oil would be able to reduce cholesterol levels in the blood, reduce symptoms related to post-menopause estrogen deficiency (especially with regard to reduced hot flashes, headaches and joint pain) and to alleviate symptoms related to prostate enlargement (prostatic hypertrophy), such as urination disorders, frequent urination and frequent night-time urination, urination urgency, intermittent urination, urinary retention, failure to empty the bladder.
According to some studies the administration of pumpkin seed oil would also lead to an increase in the values ​​of good cholesterol and a reduction in the values ​​of blood pressure, and would have a protective effect against the heart.
As for the contraindications, the intake of this oil, according to currently available data, does not appear to have side effects and is well tolerated by people of all ages. Although during pregnancy and lactation the consumption of pumpkin seed oil by feeding is safe, it is good to avoid the consumption of supplements based on this substance since the possible effects that the consumption of larger quantities might not be known yet. Sorting. At the moment there are no known cases of interaction of pumpkin seed oil with drugs or other substances. It is good to refrain from consuming pumpkin seed oil in case of certain or presumed hypersensitivity to the product.
Furthermore this oil is a traditional culinary specialty of some Austrian, Croatian and Hungarian regions, to the point of being protected by the European Union through the IGP mark (Protected Geographical Indication), pumpkin seed oil is also receiving renewed interest in the field of phytotherapy and nutrition.