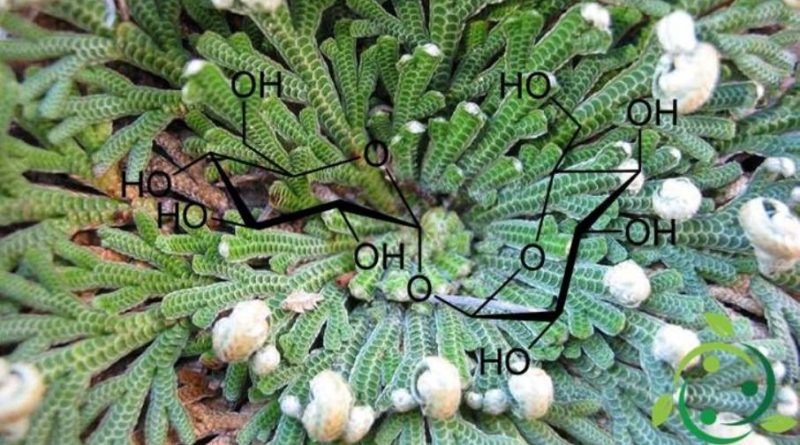 The trehalose whose term in the official IUPAC nomenclature is 2- (hydroxymethyl) -6- [3,4,5-trihydroxy-6- (hydroxymethyl) tetrahydropyran-2-yl] oxy-tetrahydropyran-3,4,5-triol is a disaccharide with brute or molecular formula C12H22O11, in the anhydrous form or C12H22O11 • 2H2O in the hydrated form.
This disaccharide has a glycosidic (acetal) 1α-1’α bond by condensation between two glucose molecules. Trehalose, in nature, is widespread in yeasts, fungi and insects.
In organisms able to synthesize trehalose it performs different functions.
The most interesting is certainly the marked aptitude to protect biomolecules in environmental stress conditions.
This mechanism allows the species that are able to synthesize the trehalose to survive in adverse conditions producing large quantities; an example is that of the Selaginella lepidophylla, but also organisms, as said, more known and used make use of this extraordinary power.
In Saccharomyces cerevisiae (the common brewer’s yeast) trehalose is used both as an energy reserve (such as glycogen) and to protect cells when environmental conditions are adverse (heat, drying, high concentrations of ethanol and radical species).
Another important role of trehalose is played in the stabilization of proteins in case of thermal shock.

In cells the trehalose is exclusively present in the nucleus and in the cytoplasm and is completely absent in the vacuoles (which occupy most of the cell volume): this discovery therefore indicated the trehalose, in adverse conditions, is accumulated in the cells and the intracellular trehalose levels they are directly related to thermo tolerance.
Other fundamental functions of trehalose in some organisms (such as in S. cerevisiae) are related to glycolysis, one of the fundamental metabolic pathways for cellular metabolism.
In some cases trehalose also acts as a transport sugar, like sucrose in plants: this occurs mainly in insects.
Trehalose represents the sugar most present in the haemolymph (up to 90%) and in the chest muscles and is used during the flight as a source of glucose and energy.
A similar mechanism is found in fungal spores: during the first stages of germination, one of the most important biochemical steps is the hydrolysis of very abundant trehalose, which in this case also constitutes a source of glucose to be metabolized to obtain energy.
The importance of this disaccharide in biochemistry is confirmed by the fact that in some bacterial cells the trehalose also has a structural function as it is one of the constituents of the cell walls.
Moreover, recent studies have established that trehalose gives human cells, properly treated, the ability to remain alive, even in the absence of water.
This disaccharide also prevents chemical and physical degradation that may occur in drug dosage forms. It has also been observed that the presence of trehalose in solution increases the denaturation temperature of proteins and inhibits their precipitation.
Thanks to these properties, solutions containing trehalose are prepared, thus allowing the preservation of tissues and organs to be prolonged.