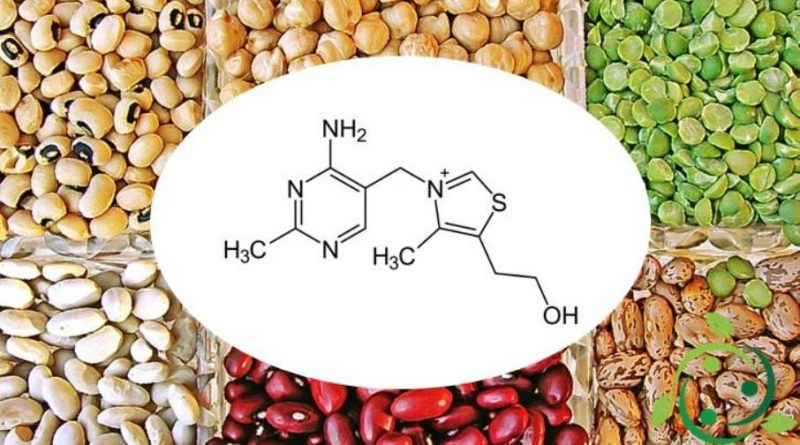 Thiamine whose term in the IUPAC nomenclature is: 2- [3 – [(4-amino-2-methyl-pyrimidin-5-yl) methyl] -4-methyl-thiazol-5-yl] ethanol and which also takes the name of Aneurina or Vitamin B1 has brute or molecular formula: C12H17N4OS.
Chemically, thiamine consists of a thiazole ring and a pyrimidine ring, held together by a methylene group.
Thiamine or Vitamin B1 is a water-soluble vitamin that forms weakly acidic solutions in water (N of the thiazole ring is strongly electronegative, so it forms a very polar bond that causes CH to behave as an acid releasing a proton) and has a good stability to heat and oxidation.
Thiamine was first isolated in 1926. In nature, thiamine is found in foods of both animal and plant origin. In plant foods, generally, it is found in free form, while in those of animal origin it is also found in phosphorylated form, in the mono-phosphate and di-phosphate form. Very thiamine-rich plant foods are legumes, germ and pericarp cereals. Another important source of thiamine is brewer’s yeast.
In foods of animal origin we find thiamine mainly in the liver, kidney, brain and intestine.
Thiamine, once taken with food, is absorbed in the proximal part of the small intestine for active and specific transport at low concentrations (<2 mg / l), while at higher concentrations for passive diffusion. The excessive use of alcoholic beverages leads to an increase in the rate of intestinal alcohol that inhibits absorption. In adults there are on average about 30 mg of thiamine, contained in the heart, kidneys, liver, brain and skeletal muscles (which contain the lowest altitude, but given the mass they contain about 40% of the total). The phosphorylation of thiamine at TPP occurs in all tissues and mainly in the liver. Thiamine is enzymatically phosphorylated to TPP from thiamine-pyrophosphate synthetase which transfers a pyrophosphate from ATP to the hydroxyl group of thiamine. TPP intervenes in the reactions of oxidative decarboxylation of α-keto acids and in transketulation reactions. The TPP dependent enzymes are:

– the pyruvic dehydrogenase that converts pyruvic acid to acetyl-CoA;
– α-ketoglutaric – dehydrogenase which transforms α-ketoglutarate into succinyl CoA;
– the dehydrogenase of branched chain α-keto acids, which transforms these last into the corresponding acA CoA.
Oxidative decarboxylation reactions occur only in the presence of coenzyme A, lipoic acid and NAD, in fact decarboxylase binds TPP, transacetylase binds lipoic acid and dependent FAD dehydrogenase regenerates reduced lipoic acid. The transketolase present in the cytoplasm transfers a glycoaldehyde group from some α-ketozuccheri (xylulose 5-P, sedoeptuloso 7-P etc.) to C1 of some aldoses; acts in a reaction of the pentose phosphate pathway to glucose oxidation. A role different from the coenzymatic one has been observed in nerve cells where the active form appears to be TTP; TTP would be hydrolyzed following a nervous stimulus and would modify the permeability of Cl ˉ channels. Thiamine in excess of needs is rapidly eliminated in the urine as such or degraded. Vitamin B1 is necessary for the synthesis of hemoglobin in the blood and for the production of γ-aminobutyric acid (GABA) starting from glutamic acid. Thiamine is not stored in the body and its lack in the diet leads to metabolic problems, especially in carbohydrate metabolism, visible a few days later, with a plasma increase in α-keto acids (pyruvic and lactic acid) and a decrease in activity transchetolasica of erythrocytes (the latter parameter is used to evaluate the nutritional status of thiamine). In conditions of chronic thiamine deficiency there are alterations of the nervous system and the cardiovascular system, with subacute and potentially fatal evolution. The incidence of thiamine deficiency has been significantly reduced following the introduction of cereal fortification, but there is still a significant health problem in populations of East Asia using polished rice and also in susceptible individuals in developed countries, such as alcoholics , pregnant women, patients subjected to malabsorption, malnourished subjects. The clinical manifestations due to thiamine deficiency are:
– Heart failure with hyperdynamic shock (wet beriberi);
– Polyneuropathy (dry beriberi): of motor sensory type, pure motor, or pure sensory, sometimes with a picture of severe disequilibrium secondary to sensitive ataxia;
– Wernicke’s encephalopathy, characterized by mental confusion, ophthalmoparesis, cerebellar ataxia and Korsakoff’s psychosis, its chronic dementia evolution, characterized by amnesia and confabulation;
– Optic neuropathy. Recommended intake levels are difficult to define as they vary depending on the diet and physiological / pathological state of the individual.
At the moment we recommend a quantity of 0.4 mg / 1000 kcal (0.8 mg in the case of diets lower than 2000 kcal). Thiamine toxicity phenomena are not known, as the excess amount is rapidly eliminated in the urine.