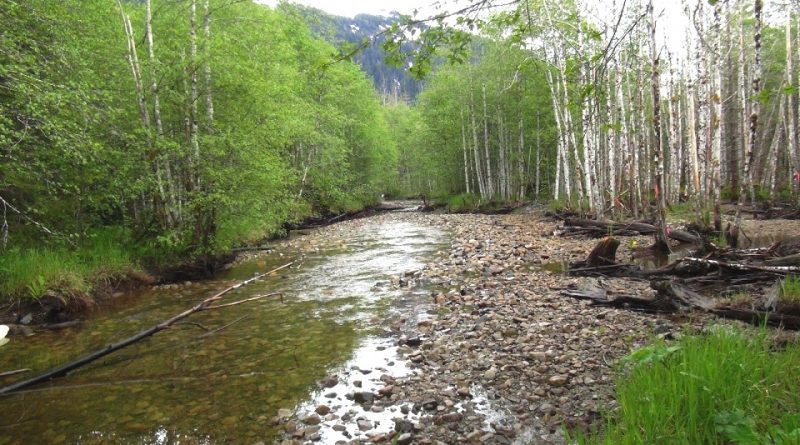 The Tongass National Forest is a vast temperate rainforest area located in southeastern Alaska. It is the largest forest in the United States of America, with a width of 68,062 square kilometers. The Tongass National Forest is divided into 19 designated natural areas that are home to very rare species of flora and fauna, many endangered due to its rather remote location.
Most of its territory is part of the temperate forest of the wider ecoregion of the Pacific. The Tongass National Forest is managed by the United States Forest Service and includes the islands of the Alexander Archipelago, fjords and glaciers and coastal mountains. It also borders Canada through the peaks of the Coastal Mountains.
The Tongass National Forest covers most of southeastern Alaska, which, with an area of ​​1,530,693 km², is the largest state in the United States of America.
The forest, by virtue of its hospitable limestone karst habitat, is home to species such as the goshawk (bird of prey), the wolf of the Alexander Archipelago, but also humpback whales, orcas, sea lions and wild salmon.
In the streams of this forest live the salmon that, to reproduce and then die, go up the rivers again in the same period of the year (they always return to the river where they are born). Salmon, swimming upstream, feed some of the world’s largest density areas of grizzlies, black bears, and bald eagles; this delicate ecosystem is however endangered by the model of development and economy of the modern world. Indeed, according to a recent study, in the United States in general and in particular in the Tongass, a very high deforestation rate has been recorded in recent years, overcoming this sad classification also includes Brazil, Indonesia, and Canada.
For this reason, important safeguard measures are urgently needed to preserve the priceless genetic heritage of species that otherwise risk not only extinction but the alteration of the delicate balance between flora and fauna within this unique habitat.
In this region live 70,000 people who based their economy on the timber industry. Today it is gradually moving to other sources of income, of a tourism-recreational type.

Today, in the Tongass national forest, tourism supports over 10,000 jobs, with about 10% of activities related to fishing. Historically, logging operations tended to focus on ecosystems at lower altitudes and with larger trees. Currently around 78% of the territory has remained intact, worth 1,550 km2 out of 1,990 km2, of low-altitude wooded areas originally.
Given the high value of these areas due to the presence of wild species, almost 70% of this old growth forest is protected thanks to the establishment of reserves where deforestation activity is not allowed. Today, forest management programs provide for sustainable management systems and balanced restoration of forest essences. In this area of ​​North America there are three indigenous populations that are: the Tlingits, the Haida and the Tsimshians. Thirty-one communities are located within the Tongass National Forest; the largest is Juneau which is the state capital, with a population of 31,000. The forest takes its name from the Tongass group of the Tlingit people, who lived in the southernmost areas of southeastern Alaska, near what is now the city of Ketchikan.
The Tongass comprises a part of the coastal forests of the North Pacific and of the glaciers of the Pacific Coastal Chain and of the ecoregions of the tundra. Together with the regions of the central and northern coast of British Columbia, designated by environmental groups such as the Orsa Major rainforest, the Tongass is part of the “peruvian rainforest” which consists mainly of western red cedar, with the Sitka spruce and from the western hemlock. Today the Tongass forest is the largest remaining temperate rainforest on Earth.
In the Tongass National Forest we find, as mentioned, five species of salmon, rainbow trout, brown and black bears and bald eagles; among the other animals that inhabit this forest we find Sitka’s wolves, mountain goats, crows and black-tailed deer. Many migratory birds, particularly the Arctic tern, spend the summer months lurking. In inland or adjacent waters we find orcas and humpback whales, sea lions, seals, sea otters, river otters and porpoises.