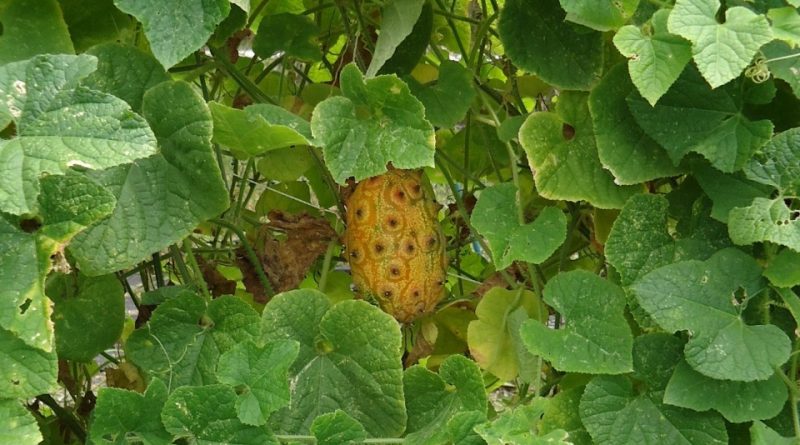 Kiwano, known in the countries of origin as horned melon (Cucumis metuliferus E. Mey. Ex Naudin), is a herbaceous species belonging to the Cucurbitaceae family.

Systematics –
From the systematic point of view it belongs to the Eukaryota Domain, Kingdom Plantae, Magnoliophyta Division, Magnoliopsida Class, Cucurbitales Order, Cucurbitaceae Family and therefore to the genus Cucumis and to the species C. metuliferus.

Etymology –
The term Cucumis derives from the Latin name given to the genus cocomero. The specific epithet metuliferus is somewhat uncertain.

Geographical Distribution and Habitat –
Kiwano is a plant native to the semi-arid regions of southern and central Africa (Kalahari desert), with particular reference to Botswana, South Africa, Namibia, Zimbabwe, Malawi and Nigeria. This plant was introduced to Australia 70 years ago where it became spontaneous.
This plant is cultivated today mainly in tropical Africa, in Portugal, in France, in Italy, in Israel, in the United States, in Germany, in Chile, in Australia and in New Zealand. 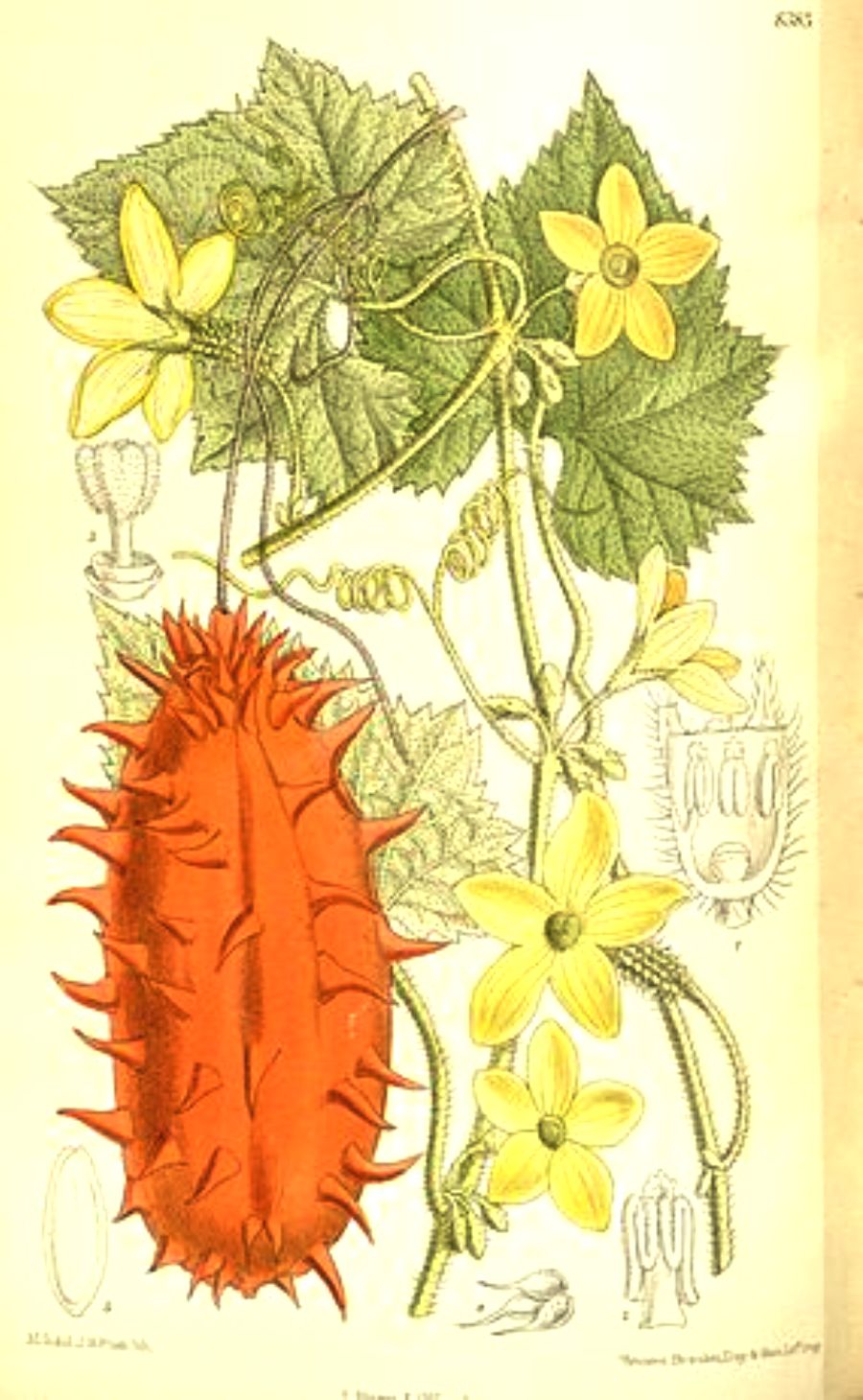 Description –
The Cucumis metuliferus is a climbing or creeping herbaceous species up to 3 m long. the leaves are heart-shaped with dimensions that are around 10 cm long and 9 cm wide, with 3-5 lobes and with lower ribs covered with hair.
The flowers, both male and female, are present on the same plant (monoecious plant). The female flowers are light green and solitary, while the male flowers are green to yellow and can be solitary or in groups up to 4. Male flowers generally appear several days before female flowers.
The fruits are yellow-reddish in color, which when ripe takes on a yellow-orange, thorny, cylindrical or ellipsoidal color, with dimensions of about 6-15 cm of length and 3-6 cm of width. Within these there is a mass of ellipsoid-shaped semi-plates covered with a light green gelatin and gelatinous pulp with a fresh and fruity taste and a consistency similar to that of the passion fruit.

Cultivation –
Kiwano is a plant that reproduces exclusively by seed; this is extracted directly from the fruits and dried before germination.
Germination is performed in a heated seedbed (in early March) and planted in late spring, when there is no more risk of frost. The seeds take about 10 days to germinate. The ideal cultivation temperature is around 25 ° C, as for cucumbers and watermelons. Kiwano fears cold winds and loves exposures in full sun. The cultivation technique is similar to that of other cucurbits, such as melon or watermelon.

Uses and Traditions –
Kiwano is a traditional food plant from Africa. The fruits of this plant, together with the Cucumber of the gemsbok (Acanthosicyos naudinianus (Sond.) C.Jeffrey) and the Melon tsamma Tsamma (Citrullus caffer (Schrad.)) Are a refreshing source during the dry season in the Kalahari desert.
Kiwano, in northern Zimbabwe is called gaka or gakachika, and is mainly used as a direct consumption or in salads; more rarely for decoration. It can be consumed at any stage of maturation, but a super-mature joint will burst strongly to release the seeds.
The flavor of the fruit has been compared to a combination of banana and passion fruit, or to a combination of banana, cucumber and lime.
The fruits of this plant are mainly eaten and in some parts of Africa the leaves are also used as vegetables. The fruits can be eaten both ripe and still immature.
When the fruits are still unripe they have the appearance and taste of cucumber. Ripe fruits can have a sweet taste of dessert fruit. The ripe fruits can also be opened, dried in the sun and consumed later. In Botswana the people of Kalahari San consume the fruits after having roasted them.
In Zimbabwe the young leaves are removed from the stems, washed and boiled like spinach, in the same way as the moss pumpkin leaves (Cucurbita moschata Duchesne), adding peanut butter before serving.
In western countries, however, Cucumis metuliferus is currently marketed mainly as an ornamental plant for its decorative fruits.
On the other hand, fruits from wild plants are often bitter and inedible. Plants with bitter and non bitter fruits morphologically indistinguishable.
The bitter ripe fruits can remain intact on the plants, since neither the baboons nor other wild animals eat them. The amount of bitterness varies in the immature and ripe fruits on the same plant, while the younger fruits have a less bitter taste. The bitter taste is mainly due to the presence of cucurbitacine, bitter and toxic compounds present in cucurbits. Cucurbitacines can cause serious illness and death, due to their powerful purgative and laxative action. Cucumis metuliferus contains cucurbitacin B, a triterpene known to have cytotoxic, antitumor and anti-inflammatory activities.
In traditional Zimbabwe medicine, wild bitter fruits are considered poisonous if taken by mouth. In the area of ​​Mutare (Zimbabwe) the roots of Cucumis metuliferus are used as a soothing for pains after childbirth. In Benin it is said that the fruit possesses medical-magical properties and is used to treat eruptive fevers in the rituals of “Sakpata voodoo”.
Furthermore, the decorticated fruit, soaked in distilled palm wine or lemon juice, is used to treat smallpox and rashes.
Beyond the various traditions and local medicines the fresh fruits of Cucumis metuliferus contain for 100 g of edible part: water 91.0 g, calories 134 kJ (32 kcal), proteins 1.1 g, fats 0.7 g, carbohydrates 5.2 g, crude fiber 1.1 g, Ca 11.9 mg, Mg 22.3 mg, P 25.5 mg, Fe 0.53 mg, thiamine 0.04 mg, riboflavin 0.02 mg, niacin 0 , 55 mg, 19 mg ascorbic acid.
Clearly the values ​​tend to fluctuate depending on the maturity of the fruit, as this can be consumed both immature and mature.
The leaf composition is approximately the same as other vegetables with dark green foliage.

Preparation Mode –
In addition to the food and healing uses linked to the popular traditions of the countries of origin of this plant, the Kiwano fruit can be consumed in various ways. The taste is bittersweet, between Lime and Passion Fruit, with a very pleasant and refreshing aroma. It can be used in fruit salads, desserts, smoothies, sauces, cocktails or to enrich salads. In general it can be consumed by adding a small amount of salt or sugar to increase its flavor. Some also eat the peel, which is very rich in vitamin C and dietary fiber.
Kiwano fruits should be stored at room temperature around 18 ° C and therefore not kept in the fridge if possible.