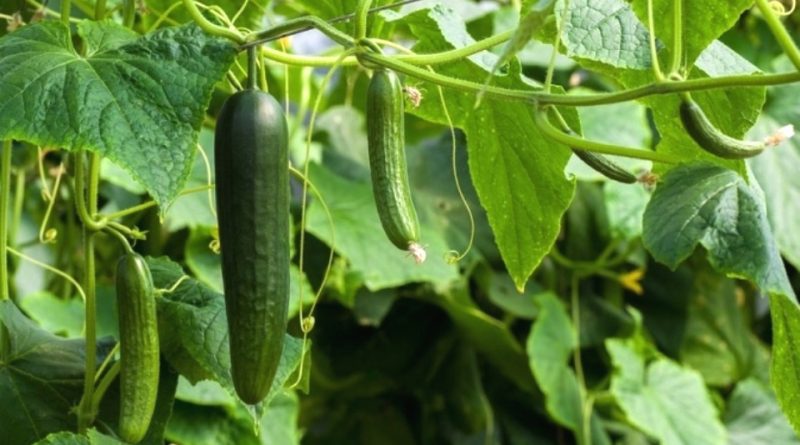 Cucumber (Cucumis sativus L.) is a creeping or climbing herbaceous species belonging to the Cucurbitaceae family.

Etymology –
The term Cucumis is the Latin name of the watermelon. The specific epithet sativus comes from satum (past participle of sero, sow, plant) sown, planted: that is sown or planted, cultivated, domesticated.

Geographical Distribution and Habitat –
Cucumber is a vegetable from India. Its cultivation begins around 5000 years in an area located at the foot of the Himalayas. The plant was probably introduced into the Mediterranean basin by the Egyptians and cultivated by the Greeks and Romans. Today this plant, in its different varieties, is cultivated in most of the world. 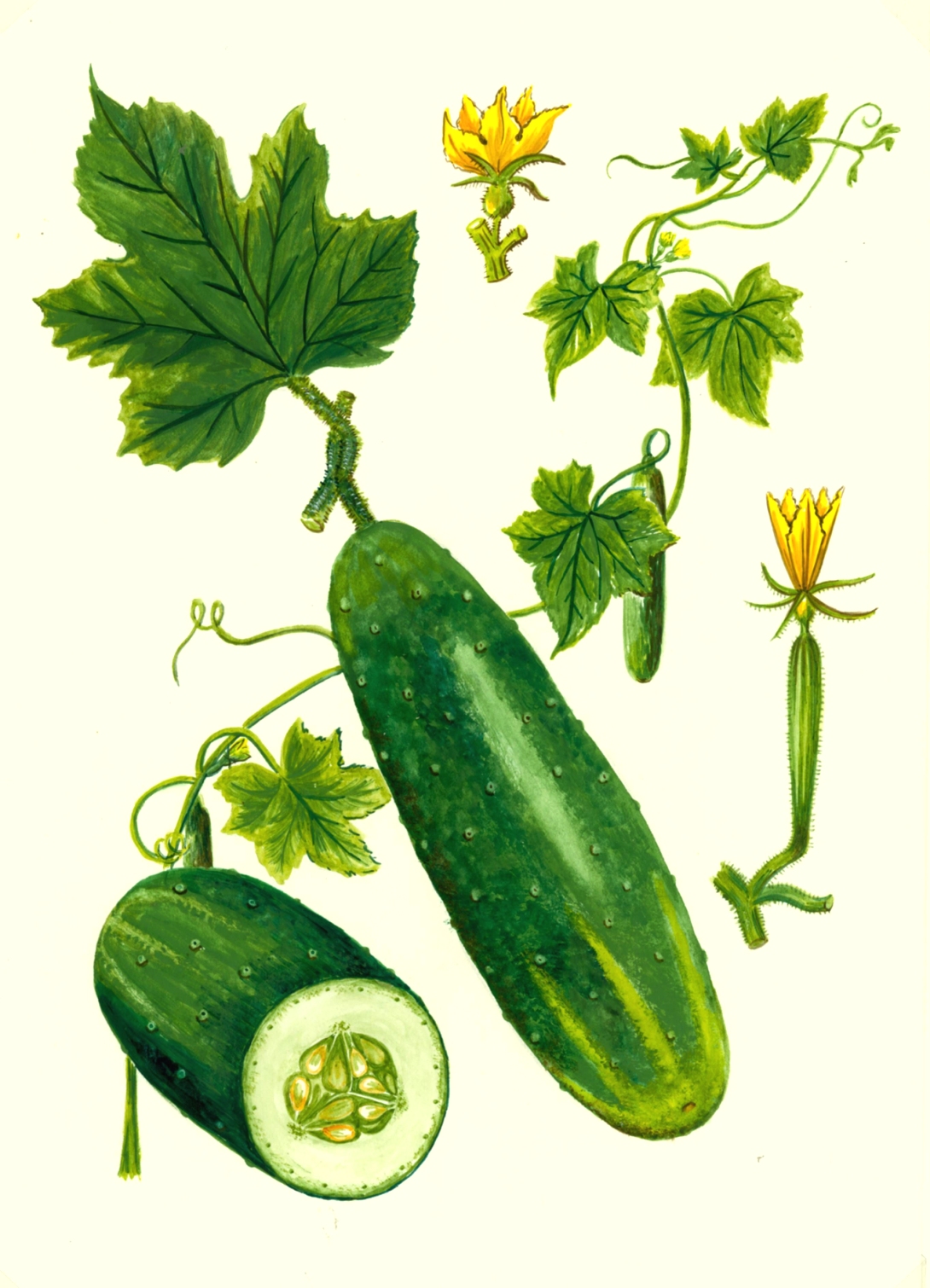 Description –
Cucumis sativus is a creeping or climbing herbaceous species when it finds supports, to which it attaches through the cirrus clouds produced by the stems and branches. The stem is quadrangular in section, hairy with ribs more or less evident. Depending on the variety, there may be more or less hair and thorns.
The leaves are rather large, palmate-lobed, with a long petiole, and are dark green and rough. The flowers are five-lobed yellow, not very large, unisexual, carried by the same plant (monoecious plant); the male ones are in groups of about five subjects, the feminine are solitary or in pairs.
The fruit is a pulpy berry rich in water and slightly acidic that recalls that of the courgette, but its peel is much thicker. The white seeds are found inside the central part.

Cultivation –
Cucumber is a rather demanding species and to be cultivated in an optimal way it needs very fertile, fresh, irrigated soils, prepared with a deep processing at least 35-40 cm and well fertilized and irrigated. It is grown both in the open field and in the greenhouse. For details of the cultivation technique, see the following sheet.

Uses and Traditions –
The first crops of this species date back to 5000 years ago and were located at the foot of the Himalayas. Subsequently, through Egypt, it was introduced into the Mediterranean basin, soon becoming one of the most popular vegetables on the table of the Pharaohs. The Bible reports that the Jews, having arrived in the Promised Land, made it their favorite meal.
The cucumber gained a reputation as a stimulator of intelligence among the Greeks and Romans and thanks to the very high percentage of contained water, it was appreciated as a thirst quencher and refreshing. Emperor Tiberius, to taste cucumbers all year round, even went against his principles of thrifty and rough warrior, making himself build expensive greenhouses mounted on wheels, because he seems to have said: “the precious seedlings can thus be transported to the sun by day and protected in a closed place at night ”.
After the fall of the Roman Empire the vegetable went practically in fashion, reappearing in the VIII century. in the Holy Roman Empire at the court of Charlemagne.
Already in the ‘500, cucumber were recognized, as well as gastronomic qualities, also properties of aesthetic remedy, using it in the composition of ointments and lotions. The Italian doctor and humanist Pietro Andrea Mattioli recommended the seeds and the juice of the cucumber to “make the skin beautiful”.
It is in fact indicated to soften the skin that tends to take on greater elasticity, its juice is recommended after exposure to the sun, while the pulp is effective for dry skin.
Cucumber is not just a simple vegetable but has proved to be an excellent ally for the general health of the organism.
In fact, it contains a very important predominant substance: tartaric acid which prevents the carbohydrates of food products, placed in our body, from turning into fats; for this reason dieticians recommend the consumption of cucumber in the diets and to all those who want to keep the weight under control. Specialists even suggest eating it combined with wholemeal bread to fully enhance its effectiveness as a highly dietary product. It also has very few calories and is therefore a good diuretic and a valid detoxifier.
The cucumber fruit is almost devoid of calories (13 kcal per 100 gr of product), which makes it common in diets, it is mainly composed of water (96%), available carbohydrates (2%) and mineral salts such as: potassium ( 140 mg), calcium (16 mg), phosphorus (17 mg), sodium (4 mg). It also contains 11 mg of vitamin C, while the contribution of vitamins from other groups is negligible. It should preferably be consumed when it is hard to the touch: if the pulp is not firm it means that the vegetable is no longer good. From the point of view of digestion it is not well tolerated by everyone: in particular it is sometimes indigestible for children. There are different types of cucumber, including the hybrid variety of cucumber and typical Apulian melon called “Carosello Bianco Barese”, often called “Cocomero”; other widespread varieties are: the long and green variety of the gardeners or the longo da china which develops vertically on the tutors. However, there are more squat and smaller varieties with thorny peel; among these are the small green of Paris, often used for pickles and white wonder.

Preparation Mode –
Cucumber is a vegetable whose fruits must be eaten raw, cut into slices in salads and enter as a component of mixed salads or as a garnish for cold dishes. Unripe harvest, of small dimensions (gherkin), is placed in vinegar and consumed in mixed appetizers and enters sliced ​​in the composition of the gardener. This drink is used in Italy, but is typically typical of Northern European nations.
You can eat entirely, with the skin and without, in different ways.