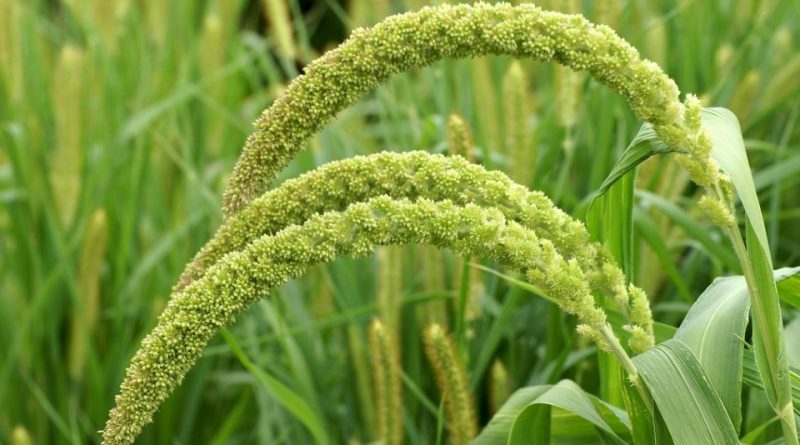 The Foxtail millet (Setaria italica (L.) Beauv.) Is a herbaceous species belonging to the Poaceae family.

Systematics –
From the systematic point of view it belongs to the Eukaryota Domain, United Plantae, Magnoliophyta Division, Liliopsida Class, Poales Order, Poaceae Family, Panicoideae Subfamily, Paniceae Tribe and then to the genus Setaria and to the S. italic Species.
The terms are synonymous: Setaria italica (L.) P. Beauvois and Panicum italicum L.

Etymology –
The term Setaria comes from silk, bristle: for the bristly appearance of the ears. The specific Italic epithet is in reference to Italy: Italic, Italian, although its origin can be attributed to the Indian Archipelago or, in any case, to south-eastern Asia.

Geographical Distribution and Habitat –
The origins of Foxtail millet are not certain; De Candolle attributes the homeland of origin to the Indian Archipelago. This cereal is a very cultivated species in Asia while in Europe and in Italy the importance of this cultivation has been decreasing more and more, since its production is exclusively destined to the feeding of birds. 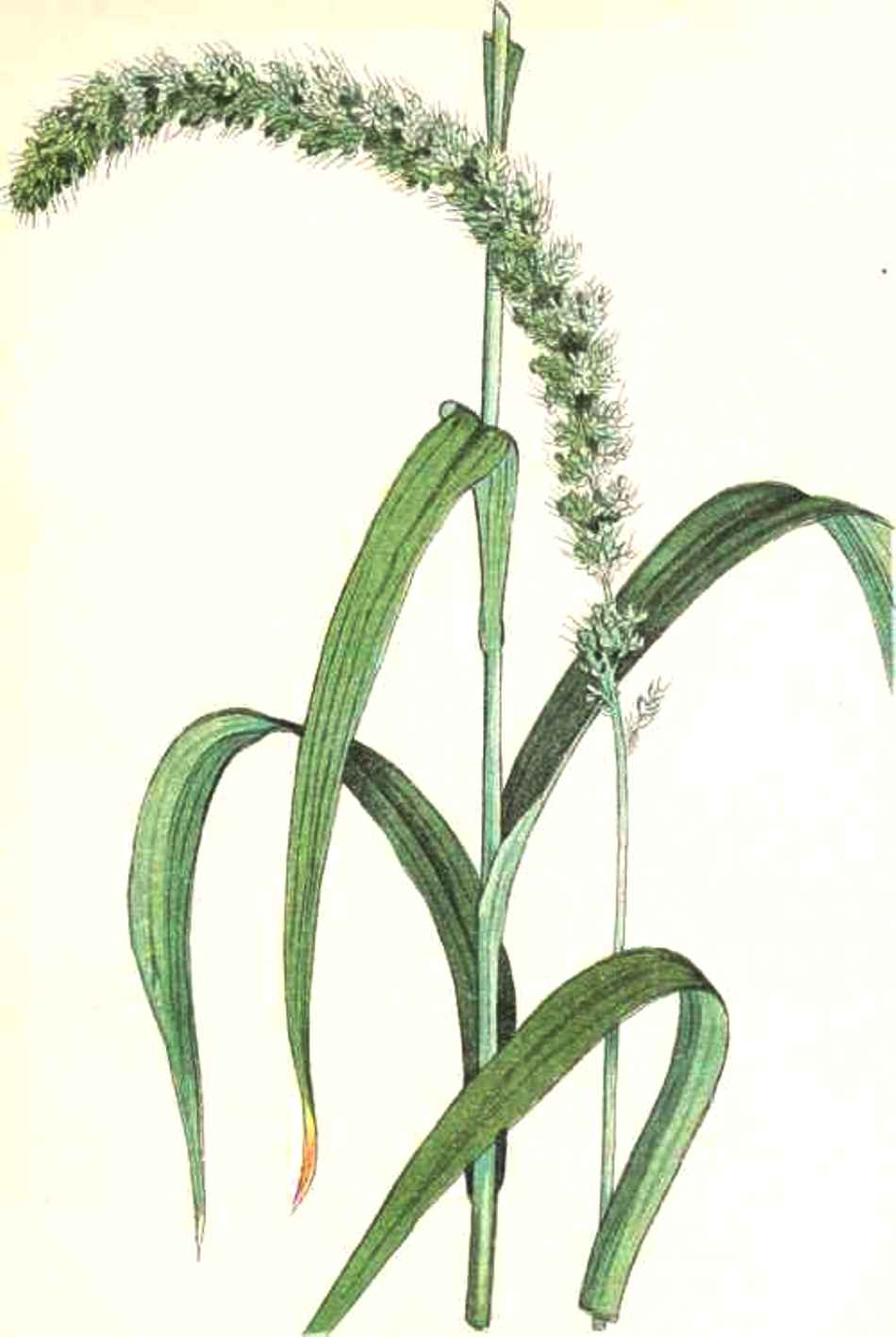 Description –
The Setaria italica is recognized for having narrow and rough leaves. The panicle is composed, irregularly cylindrical, compact, with hairy rachis on which spikelets with bristles are inserted, from 20 to 40 cm long, at maturity it tilts towards the ground. The spikelets are equipped with long bristles and contain an upper hermaphrodite flower and another lower male; the glumes are unequal, with two elongated terminal styles. The caryopses are round, flattened and small in size. The color of the seed changes with the different varieties. It is a C4 photosynthesis plant.

Cultivation –
Foxtail millet, like all macrothermal cereals, needs at least 15 ° C to germinate and to complete the biological cycle, which lasts 70-90 days depending on the variety.
The plant develops in spring-summer and adapts to poor soils and arid-dry climates, not requiring much irrigation.
The cultivation cycle is characterized by a prolonged and remarkable capacity of preparation. It resists drought and high temperatures, but is sensitive to cold and waterlogging. Due to its particular biological characteristics, this species is generally used as an intercalary crop in light and sandy soils, scarcely endowed with humidity during the whole summer period.
There are different varieties that are grown according to the different adaptability to different soil and climatic conditions.
As for the cultivation technique, given the small size of the seed, the soil must be carefully prepared, burying the quantity of fertilizer provided for the crop. Sowing (in late spring or early summer) is performed in rows 20-40 cm apart, using 6-8 kg / Ha.
As far as harvesting is concerned, the gradual maturation of the various panicles present in the crop generally creates considerable difficulties in choosing the harvesting period and, normally, it does not allow to obtain the entire production that the plants provide. The grain yield is 8-12 quintals per hectare.
Sometimes the Foxtail millet is cultivated as fodder. The yield can be 100-250 quintals per hectare and the product can be consumed in the green state or preserved in silo.
Foxtail millet can also be used as fast-growing summer grasses, to be used from milky to waxy ripening.

Uses and Traditions –
The wild antecedent of Foxtail millet has been safely identified as Setaria viridis; there are also wild forms of Panic. Zohary and Hopf note that the main difference between wild and cultivated forms is the seed dispersal system.
The first evidence of the cultivation of Setaria italica comes from the Chinese settlement of Peiligang which is the name that archaeologists gave to a group of Neolithic settlements in the Luo river basin, in the Chinese province of Henan. This crop became predominant only with the Yangshao culture. More recently, Cishan’s Chinese culture has been identified as the first to domesticate Foxtail millet around 6500-5500 BC
The first tests for the cultivation of Setaria italica outside the area of ​​origin are located in Chengtoushan in the central Yangtze river region, dating back to 4000 BC about.
In southern China, the Foxtail millet reached the Chengdu (Baodun) plain around 2700 BC and later the Guangxi near the Vietnamese border around 3000 BC.
The Foxtail millet also reached Taiwan (Nankuanli, Dapenkeng culture) around 2800 BC and the Tibetan plateau (Karuo) around 3000 BC
Foxtail millet has probably reached Southeast Asia through multiple routes. The first evidence of its presence in Southeast Asia comes from various sites in the Khao Wong Prachan valley, in central Thailand, with the site of Non Pa Wai which provides the oldest date, that is around 2300 BC.
The first evidence of its presence in eastern Siberia comes from the archaeological site of Krounovka, dating back to 3620-3370 BC about. The first direct tests in Korea come from Dongsam-dong Shell Midden, on the Jeulmun site of South Korea, with a date dating back to about 3360 BC In Japan, finally, the first evidence of the presence of the cultivation of Setaria italica comes from the Jōmon site of Usujiri in Hokkaido, dating back to about 4000 BC
The arrival of this crop in Europe is later; traces of seeds appear for the first time in the second millennium BC in central Europe. The first certain proof of its cultivation in the Near East is from the Iron Age, on the site of Tille Hoyuk in Turkey, with a date of 600 BC about.
Among the Romans, Foxtail millet was used to prepare a kind of polenta, after being pounded in a mortar.
Today it is widely used in China, India and the Middle East for human nutrition, while in Europe and North America it is used only as animal feed (bird seed or full plant, forage).
In India, Foxtail millet is still an important crop in arid and semi-arid regions. In southern India, it is the basic diet for many people from the Sangam period. It is popularly mentioned in old Tamil texts and is commonly associated with Lord Muruga and his consort Valli.
In China, Foxtail millet is one of the main food crops, especially among the poor in the dry northern part of that country. In Southeast Asia, it is commonly cultivated in its arid and mountainous regions. In Europe and North America it is planted on a moderate scale for hay and silage, and to a more limited extent, for the birdseed.
In the northern Philippines, it was once an important base product, until it was replaced with rice and sweet potato crops. Today, in Italy the production is destined exclusively to feed the birds.
In Macedonia and Romania it is used for the preparation of fermented beverages.

Preparation Mode –
Foxtail millet, a widely used food, especially in South-East Asian countries, has little response and use in Western countries. However, together with the Miglio, it could be used in macrobiotic cuisine.
In fact, there are many preparations that can be made based on these cereals: once boiled for about 20 minutes in water with a pinch of whole sea salt, it can be drained and used to make salads, croquettes, soups or to thicken creams and velvets or to make it even a tasty polenta. It is often recommended to prepare first courses in which there is a 50% combination of rice and 50% of Foxtail millet or Miglio; in the macrobiotic diet, in fact, the most “yang” cereals are recommended, such as rice, Foxtail millet, millet and buckwheat.