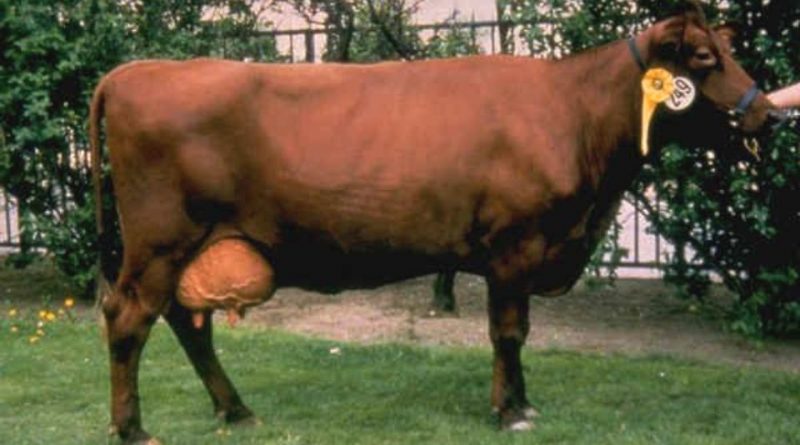 The Estonian Red Cattle is a bovine breed (Bos taurus Linnaeus, 1758), dual-purpose, originating from Estonia where it is bred.

Geographical and area distribution –
The Estonian Red Cattle originally from Estonia where it is currently bred and where it now represents over 60% of the cattle raised in this Region.

Origins and History –
The Estonian Red Cattle (Eesti punane) is a breed that has evolved through the continuous crossing of Estonian Native cattle with Danish red cattle. This cross began in the mid-1800s with the aim of creating a breed that produced milk with a high fat content and greater yield. Later, attention was focused on weight and build. The first cattle of the Estonian Red Cattle breed were included in the herd book in 1885.
The Estonian Red Cattle began to spread throughout Estonia towards the end of the 19th century, although a large number of herds perished during the First and Second World Wars. In 1916 there were 269,000 cows that were reduced to 225,000 in 1920. The Estonian Red Cattle was strongly desired by Jaan Mägi who in 1928 renamed the breed with the name by which it is known today.
In 1993, in Denmark, the European Association of Red Dairy Breeds was created which aims to improve the red races to make them cheaper, offer opportunities and information to European red cattle breeders; the Estonian Red is one of the five races. This breed is also part of the International Red Cow Club.
In recent times, to improve this breed, seven different breeds have been used to improve this breed, such as: Angler, Danish Red, Swiss, Red Holstein, Norwegian Red, Ayshire and Swedish Red and White.
Today the improvement of the Estonian Red Cattle is carried out by pure hybridization and by crossing with the Danish Red Race and the Angler.
After this careful work of improvement, the Estonian Red is an absolutely competitive and popular breed also with regard to the Estonian Holstein breed; today this breed represents 63.3% of all livestock in Estonia.
The genealogical book was founded in 1885.

Morphology –
The Estonian Red Cattle is represented by medium-sized cattle but with a strong structure. The color of the coat is red, which can vary from light to dark (sometimes it can vary towards brown and rarely black), the bulls tend to be darker.
The average characteristic measures of this breed are: height of the hock 135-145 cm, depth of the chest 70 cm, width of the chest 45.5 cm, length of the body 157.9 cm.
The mature cows weigh from 450 to 550 kg with a maximum of 780 kg and the mature bulls still weigh from 800 to 900 kg, with a maximum limit of 1000 kg. The calves at birth weigh from 31 to 33 kg.