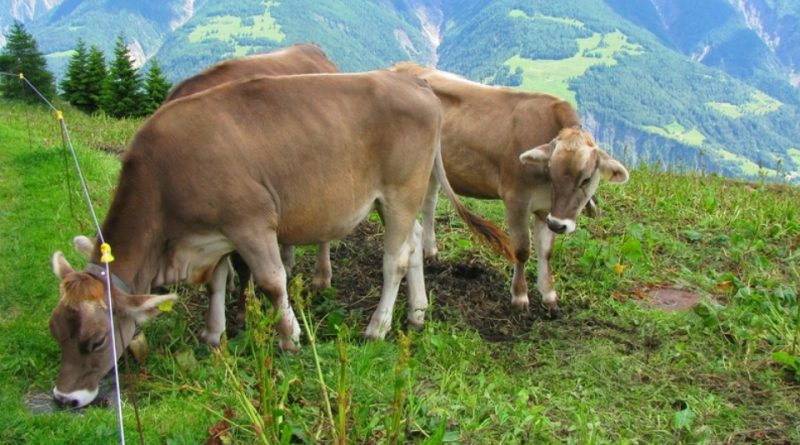 The Brown Swiss is a bovine breed (Bos taurus Linnaeus, 1758) bred in Switzerland and in particular in the canton of Schwyz, in a dual attitude.

Geographical and area distribution –
Brown Swiss is a breed of cattle bred in Switzerland and especially in the canton of Schwyz and is the second breed in Switzerland (especially in the eastern area) after the Simmental. The Brown Swiss breed has contributed to the formation of brown cows in many countries on all continents thanks to the qualities of physical resistance, productivity and adaptability to different environments. Among the derived brown breeds we remember the Italian, German, Austrian and French Bruna.

Origins and History –
The area of ​​origin of the Brown Swiss is Switzerland, in particular the Canton of Schwyz, where it is called Braunvieh (international name Brown Swiss or Brown Mountain).
The first reports of breeding brown cattle date back to around 1000 AD The indigenous brown race population was formed through the natural selection made by the difficult mountain conditions and by that operated by man. The original selection action was made by the monks of the Abbey of Einsiedeln in the Canton of Schwyz, as early as 942.
At that time the cloaks and the characteristics of the animals were different depending on the breeding areas (red, black, spotted). Subsequently, after 1700, again mainly due to the Monks, the breed was improved and the coat became uniformly stable. Today, cloaks with stripes are rare.
In 1800 a particular care of the morphology begins and also the export to other countries. The Brown Swiss Breed Association was established in 1897.
With the establishment of the Swiss Federation in 1987, the breeding of brown cattle has been continuously improved and standardized. At the time, the zootechnical objective included a triple attitude: a cow capable of producing milk, meat and which could be used for towing jobs. In this way a strong, resistant, fertile, long-lived, productive animal developed, with great adaptability and a very uniform body shape and color. The strong limbs and hoofs allowed a search for fodder in difficult terrain with little grass and rare sources of water. Robust skin with thick brown hair and blue-black pigmentation of the eyes allows a high tolerance to extreme solar radiation (experiences from tropical countries). Its dual aptitude (milk and meat) allows the breeder to follow every production sector.
At the end of the 1960s, the demand for more dairy and large-format animals increased. To quickly achieve this goal, many Bruna breeders resorted to crossbreeding with Brown Swiss genetics from America. Other breeders remained faithful to pure breeding, improving dairy productivity through a strict selection within the population and always maintaining good productivity in meat.

Morphology –
The Brown Swiss is characterized by having a more or less clear (gray-brown) brown coat, never burnt brown.
Calves are gray up to the age of 2-3 months. The muzzle and the skin are pigmented (black). There is a white halo around the muzzle. The horns are short, clear and with a black tip. In general the animals of this breed are beautiful, harmonious, correct, used to grazing in difficult and poor soils.

Production aptitude –
The Brown Swiss breed is represented by historically dual-purpose animals with slight prevalence for milk production. Since 1967, limited and controlled employment has been carried out by Brown Swiss from North America to improve the dairy characteristics.
The breed is somewhat rustic with a particular adaptation to the particularly difficult grazing conditions of the areas where it is raised.
The average production of the controlled cows (from 1988) is 5,200 kg of fat 3.89% of proteins 3.31%; to have a comparison with productive capacities of other breeds we must remember that more than half of the controlled cows were raised in the mountains.
In fact the average production of those raised on the plain was 6,180 kg.
As for the yields and performances for meat production these are discrete.