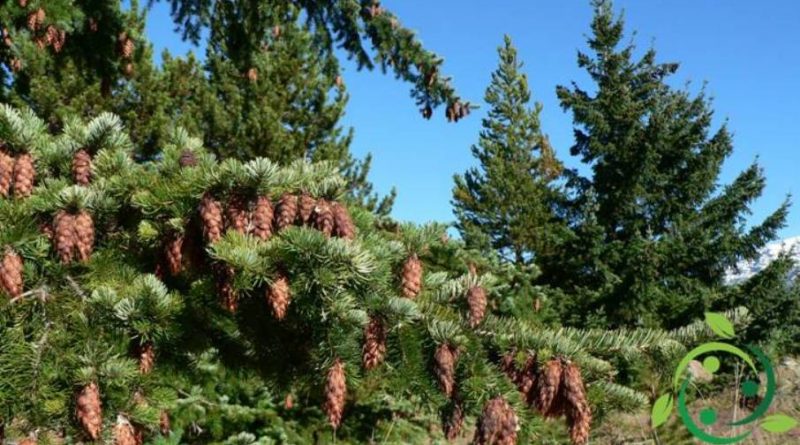 How to grow Douglas fir

Douglas fir or coastal douglasia (Pseudotsuga menziesii (Mirb.) Franco) also known as Oregon Pine, is an evergreen conifer widespread in the coastal regions of North America from British Columbia (Canada) to California (United States). Particularly widespread in the states of Washington and Oregon, it has become the symbol of the movement for the independence of Cascadia. In California it is found in the Klamath Mountains until it reaches the Sierra Nevada to the south.
It is a tree that has its habitat from sea level up to a height of 1,800 m.
In this card we will see how to grow Douglas fir, taking into account its climatic and soil needs.
Douglas fir is a tree that can reach up to 100 m in its original habitat. It is an evergreen conifer native to North America and Canada, spreading in Europe only from the seventeenth century onwards.
The tree has a straight and slender trunk covered with a greyish bark. It has needle-shaped leaves, arranged in a spiral and green in color; these needles are flat and straight, about 3 cm long and give off a delicate resin aroma. The pine cones reach lengths of 10 cm; initially they are green, later they become brown.
For its morphological characteristics and for its bearing, Douglas Fir is a perfect ornamental tree thanks also to the beautiful evergreen foliage.
Although originating from the American continent, Douglas fir can also be grown in Italy and does not require special care, so much so that we could call it spontaneous growth.
As far as propagation and multiplication is concerned, it normally proceeds by sowing within nurseries. When the plants are grown they are sold; often as trees for Christmas decorations.

For the plant we remember that it is a species that grows well both in clayey or sandy soils, ensuring however that the plant does not undergo water stagnation. Also as regards the reaction of the soil is a plant that adapts to various pH conditions.
At the time of implantation, in the same hole made to house the young seedling, it is advisable to place on the bottom, mixed with the same earth obtained from the hole, some mature manure or other well humified organic substance.
Let’s see the exhibition.
Douglas fir must be grown in well-exposed places, and it does not fear the cold and tolerates not too much heat; for this reason it is a perfectly compatible plant especially in the parks or gardens of northern Italy.
For irrigation it is noted that this tree does not need particular amounts of water and is satisfied with the rains. The irrigation operations will therefore be concentrated only in the early years until the plant creates a root system so deep that it only grows with winter rains. It is therefore advisable to constantly water the younger plants and newly transplanted into the ground.
Douglas fir, like other conifers, does not need pruning; however, it is good to remove the dry branches. If you want to give the plant a taller and more slender shape, it is advisable to remove the basal branches.
This American spruce is also a plant very resistant to pests and fungal diseases on conditions that are cultivated in its most suitable range and in a natural way, without the aid of synthetic fertilizers.
Douglas Fir is a fast-growing plant, which is why it is widely used in forestry for timber production.