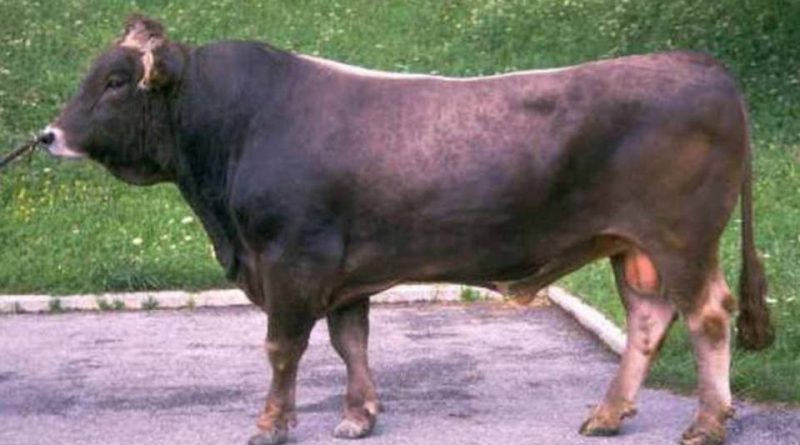 The Brown Mountain is a bovine breed (Bos taurus Linnaeus, 1758) originating from dual-purpose Austria with prevalence for milk production.

Geographical and area distribution –
The Brown Mountain is native to Austria where it is called Osterreichisches Braunvieh. It is a widespread breed especially in the Austrian regions of Tyrol, Voralberg and Styria.

Origins and History –
The Brown Mountain is a cattle breed that was formed in ancient times by selecting local breeds such as the race of the Rhaetian Alps (with a black-brownish coat) and Walser. It was later improved through crossbreeding with Bruna Switzerland, Bruna Tedesca and Brown Swiss (USA). It is a breed selected to be bred in very hostile environments. In Austria it represents around 12% of the bovine population.

Morphology –
The Brown Mountain is recognized for having the color of the dark brown coat that is darker in the bull. It has a black muzzle with a white halo. The horns are short, fine, clear and black in the terminal part.
These are animals with smaller size than Bruna Switzerland, a factor also linked to difficult breeding conditions. The average weight of adult cows is between 500 and 550 kg.

Production aptitude –
The Brown Mountain breed has an exceptional adaptability to the environment and climate where it is bred, thus presenting an excellent rusticity. It is in fact a breed with excellent grazing qualities in high mountain habitats.
The average production of controlled cows (updated to 1994) is 5,560 kg, with a fat content of 4.12%, proteins 3.29%; these are values ​​that, given the climatic, environmental and nature conditions of the pastures where these cattle grow, are to be considered excellent.
The selection of this breed has led to a noticeable improvement in the udder and the lactose characteristics, maintaining the qualities of the breed which are hardiness and exploitation of the coarse fodder.
In general, therefore, the Brown Mountain has a good conformation and a good balance of the productive relationship between milk and meat even if the milk production characteristics tend to prevail, while still maintaining good performance for meat production.