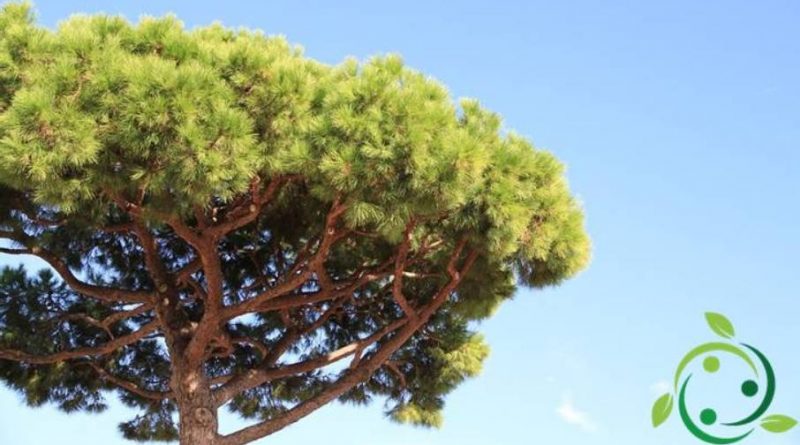 How to grow domestic pine

The domestic pine (Pinus pinea L., 1753) is a tree belonging to the Pinaceae family, quite widespread in the Mediterranean basin, above all on the northern coasts, where it forms vast woods (pine forests).
In this card we will see how to grow domestic pine, also called pine from pine nuts.
It is an evergreen conifer that can reach optimal soil and climate conditions at a height of 25-30 m.
The plant has a bare trunk 60% above which the branches form the typical umbrella-like foliage, which before the age of 50 appears instead in a globular form. The bark has a gray and smooth shade that cracks in large plates and becomes reddish over time. The branches are curved and ascending, the twigs are green or yellow-green. The needles persist for up to 4 years and are worn in pairs; they are about 10-12 cm long, with a serrated edge, and are whitish green that turns yellow towards the non-pungent apex. Needle replacement occurs with the fall of older ones during the summer and with the emission new ones spring up around April and reach their final size the following autumn. Flowering occurs between April and May.
As far as the reproductive organs are concerned, it should be remembered that the gymnosperms to which the domestic pine belongs, do not produce flowers, but sporophylls which, for the domestic pine, ripen between April and May.
The plant has macrosporophylls: red, growing at the end of the new buds and microsporophylls, yellow-orange, more evident than the female ones, placed at the base of the shoot.
In Pinus pinea the strobili, called pine cones, are 8–15 cm long, ovoid and large. It takes 36 months to mature, more than any other pine. They open to maturity to release the seeds. The latter, the pine nuts, are large, 2 cm long, light brown in color with a shell covered with a dark sheath that is easily scratched and have a rudimentary 5 mm fin that goes away easily. The wind has no effect to transport the seeds, which are dispersed by the animals, typically from birds, but today mostly from man.
The roots of the plant are strong and robust, initially with a taproot then lateral and superficial, and come into symbiosis with the bianchetto truffle and the scorzone.
For the cultivation of domestic pine it is recalled that this species is present in almost all of Italy including the islands, with the exception of Piedmont, Valle d’Aosta, Lombardy trentino, Marche and Puglia. Its distribution range goes from 0 to 800 meters above sea level, in coastal type habitats, on sandy and loose soils.

It is a heliophilous and thermophilic plant, very sensitive to absolute minimum temperatures especially in the presence of high humidity, so in environments it can withstand even up to -25 ° C, otherwise it cannot go below -12 ° C.
For its optimal cultivation, however, it is good that the minimum temperatures never drop much below zero. Snow also damages the tree, crushing its branches. It bears summer aridity very well, with highs above 30 ° C and low rainfall, even if contrary to what is believed an excessively long drought damages it.
The domestic pine is rather rustic in terms of soil; in any case we must avoid those that are swampy or distinctly saline. It is a plant that badly tolerates air pollution, especially that carried by brackish winds from sea areas polluted by surfactants.
The domestic pine is a fast-growing plant so it is highly recommended for the vegetable covering of damaged or poor areas of arboreal vegetation. Its introduction, however, must always be subordinated to its optimal habitat. In fact the domestic pine is ideal for reinforcing sand dunes, in gardens of coastal areas, very common along wide avenues in beaten earth, taking care however not to place it near road pavements and sidewalks that tends to deform with its roots.
Furthermore, the domestic pine has a foliar secretion which inhibits the germination of the seeds and which is washed out on the ground with the rains, being able to create problems of growth of plants under its foliage also because the continuous abscission of the needles greatly acidifies the soil.
For this reason, in the choice of undergrowth plants it is necessary to move towards ivy and acidophilic plants such as cyclamens, hydrangeas, etc.
As regards the propagation of domestic pine, this occurs by seed immediately after harvest or in late winter. The ideal temperatures for germination are between 17 and 19 ° C; the seeds can be stored for 3 to 6 years at temperatures between 2 and 4 ° C. The planting of the seedlings must be carried out in the period between late spring and early summer, having reached 5-10 cm in height, and possibly should no longer be transplanted, taking care however to protect them from the cold for the first two winters spent at the open and to mulch the surrounding area to discourage weed competition.
With regard to the possibility of carrying out vegetative propagation, this must take place via cuttings and is successful only if it is carried out starting from very young plants (less than 10 years).
Finally a hint on the possible parasites and plant diseases. Among the parasites we remember the processionary of the pine, Tomicus destruens, Pissodes notatus and Rhiacionia buoliana, as well as some mushrooms including Cronartium flaccidum, Heterobasidion annosum and Fomes annosum.