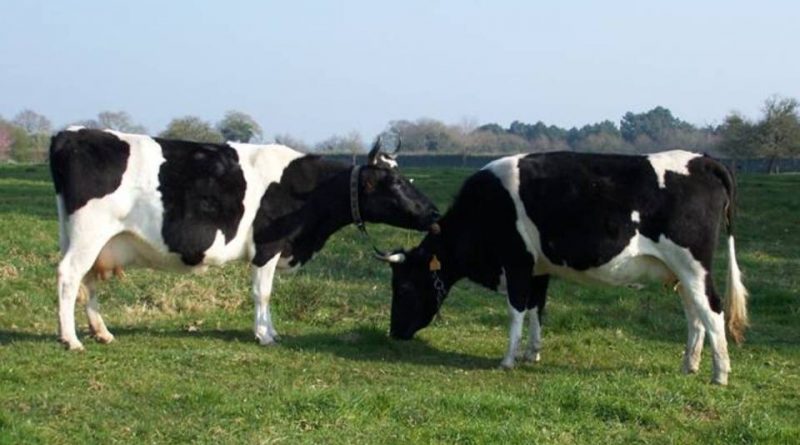 The Breton Black Pied (Bretonne Piè-noire) is a bovine breed (Bos taurus Linnaeus, 1758) native to southern Brittany in France with a dual aptitude and prevalence for milk production.

Geographical and area distribution –
The Breton Black Pied is widespread especially in the historic region of Brittany, including the current provinces of Côtes d ‘Armor, Finistère, Ille-et-Vilaine, Morbihan and Loire Atlantique.

Origins and History –
The Breton Black Pied is native to southern Brittany in France, where it is called Bretonne Piè-noire. It is a native breed that has undergone crossbreeding with Durham and Frisona, while maintaining its characteristics. The name of this small cow derives from the black and white mantle, for the note pie noir.
The first Genealogical Book of the Breton Black Pied was established in 1886.
This breed is likely to have contributed to the formation of Jersey.
Until the end of the nineteenth century, the “bretonne pie noir” was one of the most widespread French cattle breeds, so much so that in 1900 there were 700,000 cows.
In the 60s a vertiginous crisis begins: modernity does not tolerate its small size and its lack of specialization, thus forgetting the positive aspects: rusticity, resistance to diseases, the ability to adapt to the poor pastures of southern Brittany. Moreover, the pie noir has always contributed to maintaining the fragile landscapes of the region, characterized by granite and acid soils, which in some areas are periodically flooded with sea water.
In 1976, when his death seems inevitable, a protection program was launched: in France it is the first dedicated to a cattle race. This scrupulous program allows the start of numerous agricultural activities managed by young breeders. Currently there are about fifty, gathered in the Union Bretonne Pie Noir. Their activity is based on extensive breeding, respect for the environment, direct relationship with the consumer, the typicality of products made with traditional techniques, all guaranteeing a good economic return.
The bet on safeguarding the breed was thus won: in 2012 there were already 1,600 cows. Breeders now focus on the enhancement of its products, through the short supply chain and the link with the local consumer and on the precise sensory description of milk derivatives and, later, on meat.
The most typical dairy product of the regional gastronomy is the fermented milk called Gwell by the producers of the Union Bretonne Pie Noir.

Morphology –
The Breton Black Pied is a breed characterized by a black spotted coat. These are small animals (among the smaller breeds).
The males have a height at the withers, on average, of 123 cm, the females of 117 cm; the average weight is 600 kg for the bulls and 450 kg for the cows.

Production aptitude –
The Breton Black Pied is a breed of small cattle that have good productivity and the ability to exploit poor and marginal soils.
It is a dual-purpose breed with prevalence for milk production. However, production tends to be high in relation to weight, with high levels of milk substances, especially in fat. The average production per head, for controlled cows (in 1987) was 3,550 kg with 4.3% fat, 3.49% protein.
The milk that it produces, although not abundant (no more than 5000 liters a year), is rich in cream.
Furthermore it is a breed in which the females have unquestionable maternal gifts.
Fermented milk is produced from the milk of this breed; moreover, products such as: cream with raw milk, creamy and slightly acid, and the inimitable salted butter are being exploited.