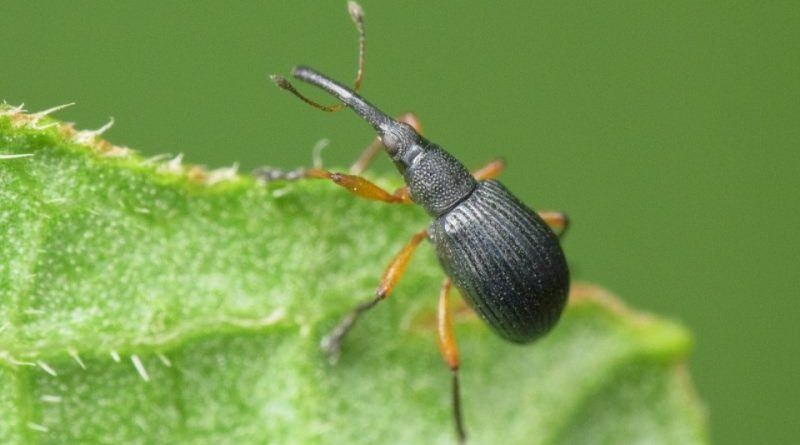 The Apion of the clover heads (Apion apricans Herbst, 1797) is a small beetle from the Curculionidae family.

Geographical Distribution and Habitat –
The Apion apricans is a cosmopolitan native beetle from Europe that lives on clover plants and that winters in the soil at a depth of 5 cm, in forest belts, in ravines, at road edges, under fallen leaves and remains of plants.

Morphology –
The Clover Apion is a beetle whose adult is 2.5-3.5 mm in size, black in color, with metallic reflections and with a pear-shaped body, with femurs and tibiae of the yellowish front legs ; also the femurs of the 2nd and 3rd pair of legs are yellowish; the rostrum is long, almost straight; the antennas are black in the apical part and red at the base.
The larvae are 2-2.5 mm, with the arched body, white with a creamy shade, a dark brown curved head, with three small growths on each side of the upper jaws, apode and with sketches of legs.
The pupae are 3-3.5 mm, yellowish white in color.
The eggs of 0,3-0,5 mm, yellowish, long and smooth.

Attitude and biological cycle –
The Apion apricans winters in the adult state, in the ground or in other crevices or under leaves and vegetation remains; in spring, from April onwards, the adults come out of the winter shelters, they feed on the parenchyma of young leaves during a period of 15-21 days and mate; in the second half of May, during the sprouting phase of the clover, the females lay in the heads of this plant.
The average fecundity of the female is 35 eggs, with a fluctuation from 11 to 217. To lay the eggs, the female gnaws a pit with the beak, pushing the egg in with the ovipositor. The embryonic development of the egg lasts 5-8 days.
The larvae responsible for the destruction of the flowers will be born from these eggs. The development of the larvae has a period of 15-20 days.
Later when the larvae reach maturity, they pupate among the remains of the flower head; in the early summer, the adults of the first generation flicker.
These individuals will give rise to the second generation which is then destined to winter.
In addition, these beetles can live and reproduce for 2-3 years.

Ecological Role –
The Apion apricans is a beetle that lives at the expense of the clover plants and other herbaceous and arboreal species. Damage is caused by both adults and larvae:
– adults perform erosions on the leaves;
– the larvae, born on the flowers, feed on the ovaries, damaging the inflorescences. The most consistent damage is obviously in the cultivation of the clover from seed.
In the case of high infestations, 80-100% of the heads can be damaged and the clover seed yield can be reduced to 25-30%.
The interventions for the reduction of infestations and damage are meanwhile of an agronomic type, operating the anticipation of mowing meadows; another trick is the good rotation of the meadows and the decrease in the extension of the clover cultivated plots, increasing the biodiversity of the species cultivated inside the farms.
In the case of necessity of the chemical intervention it is necessary to intervene only in the presence of serious infestations and, for the cultivations from seed, it can be done before the opening of the flowers.