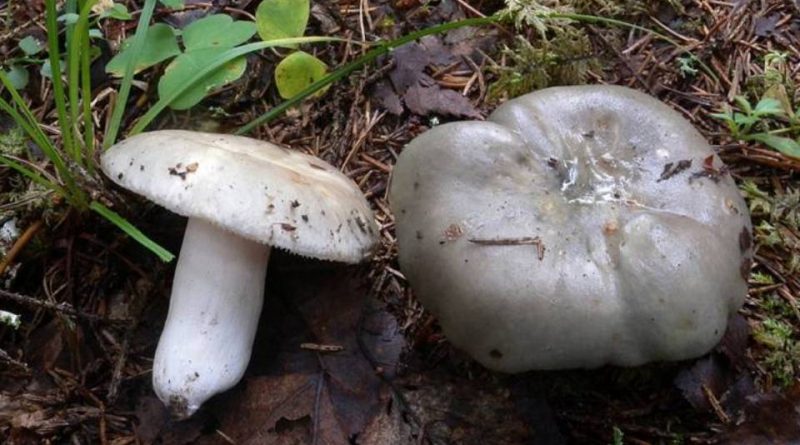 Systematics –
From the systematic point of view it belongs to the Eukaryota Domain, Fungi Kingdom, Phylum Basidiomycota, Class Basidiomycetes, Russulales Order, Russulaceae Family and therefore to the Genus Russula and to the R. medullata Species.

Etymology –
The term Russula is the diminutive of russus red: a little reddish, attributed to this family due to the prevalence of this coloring. The specific medullated epithet comes from medúlla, marrow: because it has marrow.

Geographical Distribution and Habitat –
Russula medullata is a fungus that grows under broad-leaved trees, conifers and mixed woods, especially under Birch (Betula pendula) and Spruce (Picea abies); fruits in the period between summer and autumn.

Recognition –
It is recognized because it is a medium-sized mushroom, with a cap from 4 to 10 cm in diameter, convex in young specimens, then completely flattened, with the center always depressed, fleshy and hard. The margin is strongly convex at the beginning, it is flattened almost totally, wavy, whole, smooth, slightly grooved in the adult specimens. The cuticle is separable by about half, is slightly viscid and shiny in the presence of damp weather, and opaque in low humidity weather conditions; it has a non-uniform color, with a dominant gray-green, gray-olive and darker center, and shades of pink-lilac or discoloration towards yellow-ocher in the center of the hat; moreover, in the adult specimens there are often rust-colored spots scattered on the cuticle.
The lamellae are initially rather dense, then slightly more spaced, from adnate to attenuate-uncinate, subdecorrent, slightly ventricular, with numerous furrows to the stem, of a pale cream color tending then to ocher with spore maturation.
The stem is 3-8 x 1.5-2.5cm, cylindrical in shape, often attenuated at the base and flared at the apex, full and firm in the young specimens, it soon becomes marrowy and corticato, smooth and whitish, then slightly wrinkled and stained with ocher with maturation.
The flesh is whitish in all the carpophore, to become in old age of ocher-yellowish color in the cortical area of ​​the stem and in the deteriorated parts, thick and firm, then cassante; it has an imperceptible smell and a sweet taste, except in the lamellas, slightly peppery in the young specimens.
At the microscope, spores of 6.3-8.5 x 5.5-6.5 µm are noted, ovoid, warty, with isolated and obtuse warts, up to 0.5 µm high, mass ocher, amyloid, obtuse apiculture , 1-1.2 µm, more or less wide folds.
The cystidia are 70-100 x 7-9 µm, spindle-shaped, with the thinned or appendiculate top.

Cultivation –
Russula medullata is not a cultivated mushroom.

Uses and Traditions –
The Russula medullata is a Russula with colors and macroscopic characters similar to other species of the genus and therefore not of simple determination. Important for its recognition are the mild flavor of the lamellae especially in the young specimens, the ocher-yellowish sporata and the ornamentation of the spores constituted by isolated warts.
Among the species with which it could be confused we remember:
– Russula parazurea Jul. Schäff., Has the hat with analogous chromatism but differs in having the flavor of the slightly acrid gills and for the crored and subreticated spores;
– Russula ochrospora (Nicolaj ex Quadr. & W. Rossi) Quadr., For some authors synonymous with Russula parazurea, is distinguished by having a more charged sporata, for the subnull reaction to Ferrous Sulfate, for larger and reticulated spores;
– Russula aeruginea Lindbl. ex Fr., exclusive of the alpine or northern European habitat, differs for the taste of the spicy lamellae especially in the young specimens and for having a cream-colored sporata;
– Russula pseudoaeruginea (Romagn.) Kuyper & Vuure, rare in alpine habitats, always has the hat with greenish chromatisms but is distinguished by the acrid taste of the lamellae in the immature specimens and to have the subreticated spores;
– Russula monspeliensis Sarnari, a typical species of Sardinia, also found in Tuscany, which is associated with Cistus monspeliensis, although it also has green-ocher colors, it is distinguished by the slight bitterness of the lamellae, especially in the young specimens, for the dirty pale cream and for the zebrate-subcrestate spores;
– Russula ionochlora (Romagnesi), differs in the colors on the edge of the hat, generally violet-lilac, for the sporulated pale cream and for the slightly smaller spores, although having the same ornamentations as Russula medullata.
The Russula medullata, although an edible fungus is of poor quality.

Preparation Mode –
This Russula, due to its poor quality, can be used, in small quantities, in a mixture with other mushrooms.