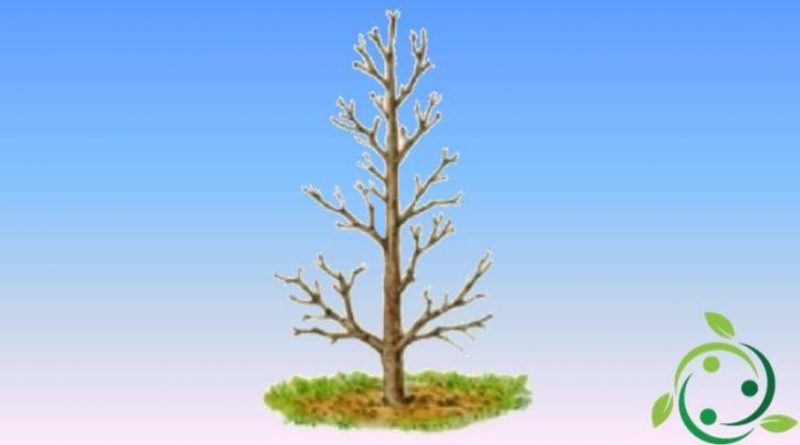 Pruning of fruit plants follows the principle of giving, through form, the best productive characteristics combined with the best vegetative balance of the plant.
Among the forms of farming, the melted one is used for the cultivation of some of stone fruit and pomaceous.
In this technique the plant pruned in spindle has a single central stem from which numerous lateral branches depart starting from a height of around 50 cm from the ground.
This technique leads to the formation of lateral branches that have decreasing length from the base to the top, so that the plant takes on a cone-like appearance.
This form of farming is typically used for apple and pear trees, which in these cases reach heights of about 2-3 meters; with this conformation also the cultivation operations are made easily manageable from the ground.
A variant of the spindle training system is that of the spindle system. This pruning system is adopted especially in commercial intensive apple growing, giving the plants an even more limited shape; in this case it is expected the use of dwarfing grafts that give the plant a reduced size and an early entry into production.

With the implementation of the fusion breeding the plants are cultivated very thick, with sixths that also foresee distances of about 2 meters from each other in rows distant from each other 3 or 4 meters. Obviously, the limit of this form of farming is that the apple trees grafted onto portals that are so little vigorous, and with a superficial root system, are weakly anchored to the ground and therefore require a tutoring system consisting of concrete poles and metal wires.
The forms of cultivation in melt, and even more so in the form of a spool, are not cultivated in dry areas or where a fixed irrigation system cannot be set up.
Moreover it is a choice not recommended in organic cultivation, where larger sixths are also preferred to limit the transmission of diseases between plant and plant.
In fact, by increasing the density of the sixths of the plant, the proximity of the plants increases, the reciprocal shadowing decreases of the agro-ecological and less specialized techniques.
The spindle shape can also be made for the cherry tree, with similar advantages compared to the apple tree (small size and early entry into production) and disadvantages (dependence of plants on irrigation system and guardians).
A variant of the spindle breeding form is the pyramid but which is adopted with wider planting spacing as it gives greater possibility to the lateral development of the basal branches.