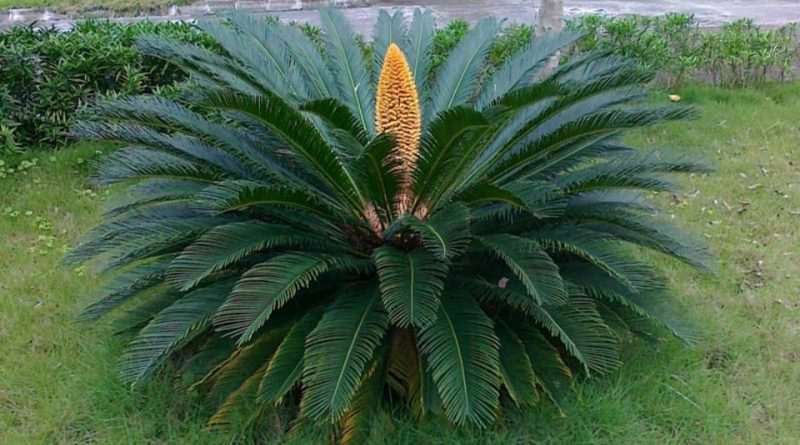 The Cycas (Cycas revoluta Thunb., 1782) is a species belonging to the Cycadaceae family.

Systematics –
From the systematic point of view it belongs to the Eukaryota Domain, Kingdom Plantae, Spermatophyta Superdivision, Cycadophyta Division, Cycadopsida Class, Cycadales Order, Cycadaceae Family and therefore to the Genus Cycas and to the C. Revoluta Species.
The term Cycas miquelii is synonymous.

Etymology –
The term Cycas, according to some Authors (including Treccani) derives from the Greek κύκας cýkas (found in Theophrastus) in turn derived, due to a writing error, from κόικας cóikas accusative plural of κόιξ coix (dum palm, in Strabo). The specific epithet revolute comes from revolute, due to the presence of some organ turned under or back in reference to the morphology of the edge of the leaf segments.

Geographical Distribution and Habitat –
Cycas revoluta is a plant native to Japan and from eastern Asia, such as China and Indonesia. It was discovered at the end of the eighteenth century and was imported and placed for the first time in Europe in 1793, at the Botanical Garden of Palermo. Today it is widespread in all parts of the world where it is grown almost exclusively as an ornamental plant. 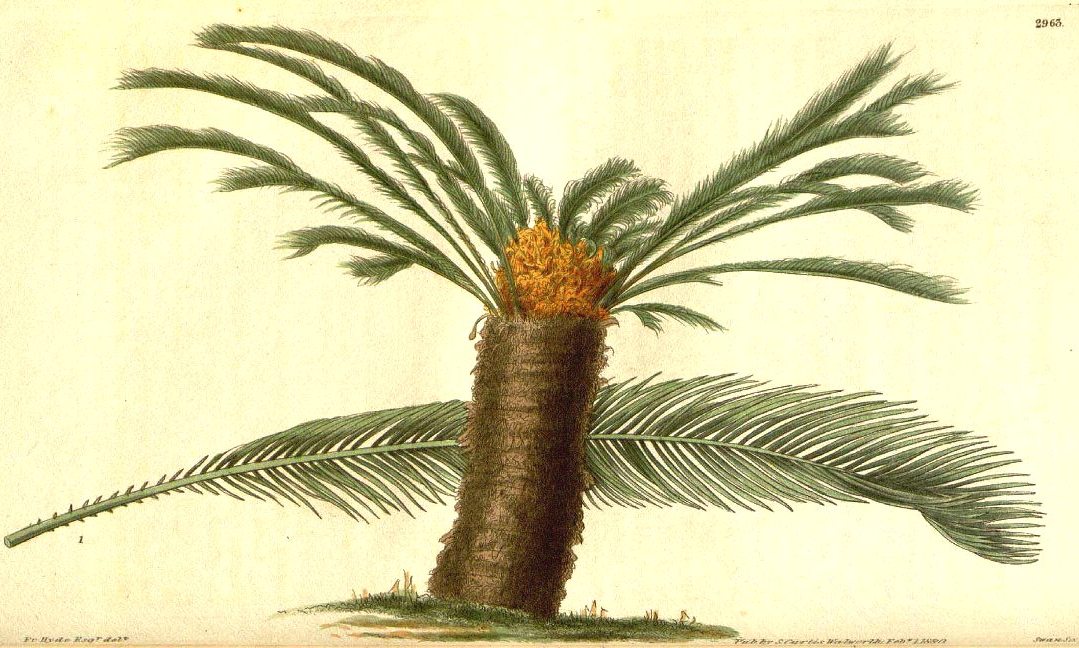 Description –
The Cycas revoluta is a plant whose appearance resembles the palm tree both for the stem, not very branched, and for the arrangement of the leaves, large and pinnate, of leathery consistency, placed spiraling at the top of the stem, like a crown; they are bright green and up to 1.5 meters long, slightly arched, shiny and pointed. The individual leaflets, rigid and thin, are 8-18 cm long; those closer to the stem change in the form of thorns.
The young leaves appear in spring at the apex of the stem in large groups; at the time of the emergency from the stem they are curled up and covered by a thick hair; within a few days the appearance of mature leaves unfolds and rapidly reaches the stem. The stem reaches a diameter of about 20 cm, with very slow growth: a few centimeters long in young plants, while in very old specimens (over 50 years) it can reach 6–7 m in height.
The adult specimens can produce inflorescences that sprout in the center of the tuft of leaves. The female ones present bracts, at the margins of which the ova are formed, which will give rise to the red and fleshy seeds.
It is a dioecious plant, with male and female cones found on different specimens and recent studies have shown that in C. revoluta pollination also occurs through insects (entomophilous pollination).

Cultivation –
The Cicas is a plant that can be grown very well in sandy, well-drained soils, in areas with very hot summers (average temperatures of 30-35 ° C) but also tolerates climates with lower temperatures. Occasional exposure to temperatures above below zero can cause leaf damage.
In regions with harsh climate, however, they require the cold greenhouse for the coldest months. It loves the luminous exposure but protected from the direct sun. In areas with more rigid climates, from June to September it can be placed outdoors in a semi-shaded position.
It is a plant that needs frequent water supply, especially if it is grown on very loose soils or substrates.
Propagation can take place by sowing or by removing basal suckers. For details of the cultivation technique, consult the following form.

Uses and Traditions –
Cycas revoluta is a plant that, especially in Western countries, is cultivated as an ornamental plant both in the garden, in more temperate climates and in pots, especially in areas with more rigid climates. Of all the cycads, it is one of the most widely used species for ornamental purposes: every year millions of them are sold worldwide.
It was planted in Europe for the first time in 1793 in the Botanical Garden of Palermo. In the countries of origin the marrow of the trunk of this plant is used for the preparation of the sago, a starch of food use. For the extraction of the sago we use the plants that have not yet come to flowering, cutting the trunks in various parts and then breaking them lengthwise, so as to be able to separate the inner fabric, from which the starch is obtained by washing.
In production areas, the sago is a product of considerable food importance and is also exported.
Remember that Cycas revoluta, even in limited quantities, if ingested by dogs or cats, can cause respiratory and hepatic damage, and in the most serious cases, even death. Causes hemorrhagic gastroenteritis, coagulopathies, liver damage, kidney failure.

Preparation Mode –
The Cycas revoluta, even if in the countries of origin it is cultivated also for alimentary purposes, in other parts of the world, above all in Europe and in the United States it is cultivated as ornamental plant.