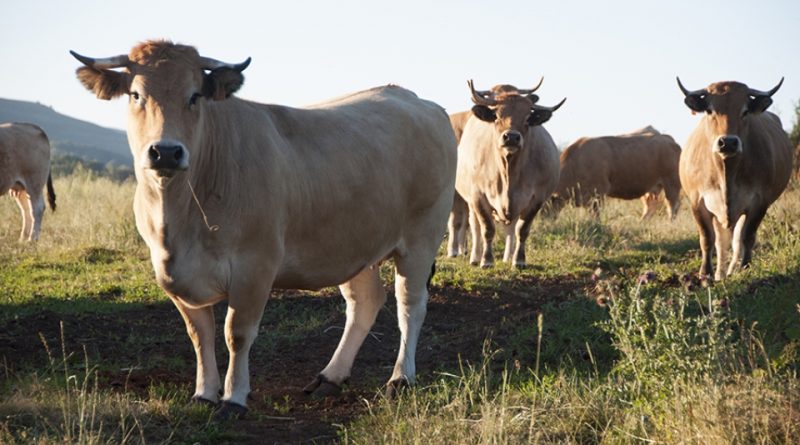 The Aubrac is a bovine breed (Bos taurus Linnaeus, 1758), dual-purpose, widespread in the departments of Aveyron and Lozère in the south of the Massif Central in France.

Geographical and area distribution –
The Aubrac is an ancient cattle breed of work and meat, originating from the department of Aveyron (mounts d’Aubrac) in the south of the Massif Central in France where, originally, the city of Laguiole was the center of diffusion of the breed. At the end of the 19th century, its presence spread throughout the Plateau de l’Aubrac and more generally in the departments of Aveyron and Lozère. In the twentieth century, its presence is further extended to the south of the Massif Central. In France, it is bred mainly for the production of calves, usually crossbreeds, to be destined for fattening.

Origins and History –
The Aubrac breed originated in the small town of Laguiole, a small French town located in the department of Aveyron in the region of Occitania. At the end of the nineteenth century, its presence spread to the whole Plateau de l’Aubrac and more generally to the departments of Aveyron and Lozère and then, in the 20th century, it expanded further to the south of the Massif Central.
Subsequently, due to the introduction of more productive breeds, the Aubrac suffered a strong risk of disappearance due to the lower productivity compared to breeds like the Montbéliarde or the Simmental. In the 1960s the Aubrac cow was thus replaced by so-called “high-potential” cows, capable of producing 10,000 liters a year, while an Aubrac cow reaches 1550-2000. Since 1991, a program to safeguard this breed has been started with the help of the Conservatoire du Patrimoine Biologique Régional de Midi-Pyrénées, with the support of the association for the defense and promotion of the Laguiole DOC cheese. Over time, the milk character of the breed deteriorated following the selections made to make the Aubrac a meat breed. The safeguard programs instead want to allow this local and historical breed to regain greater capacity for milk production.
Today, Laguiole cheese is produced, however, almost exclusively with the milk of Simmental cows, the most productive dairy breed. The Coopérative Jeune Montagne has been working since 1991 for the reintroduction of the Aubrac breed in dairy herds and guarantees a profit to the members of the breeders who have Aubrac cows in their livestock.
In 1888, the breed was officially defined by the Société d’Agriculture de l’Aveyron as a “rustic breed characterized by the ability to adapt to the reliefs of the Plateau de l’Aubrac and to the different seasons but also by an excellent propensity to calving and feeding on medium quality fodder ”. Historically it has been used for work, the production of milk and meat, while for forty years it has been destined mainly to produce meat.
The Genealogical Book was established in 1914.

Morphology –
The Aubrac is characterized by medium-sized muscular animals, light brown in color, with variations from yellow ocher to camel or from Sienna to fawn, darker on the shoulders and with long horns. The contours of the ears and eyes are black.
They are animals of medium-low stature, but with medium-high weight; adult females weigh 550-750 kg.

Production aptitude –
The Aubrac is a robust and vigorous breed, it is very resistant to diseases and is adaptable to difficult climatic conditions and is appreciated for its easy birth, longevity and high fertility rates. It is a breed bred for the quality of its substantial and tasty meats.
It is however a dual-purpose breed (meat and work) which, traditionally, is linked to the production of Laguiole cheese, which is also part of the Slow Food Ark of Taste. This cheese was once transformed into the Aubrac mountain pastures, small houses in the middle of the mountains, where the milk was processed and turned into cheese in Laguiole during the summer mountain pasture period. The milk is particularly rich in proteins and has a balanced fat content.