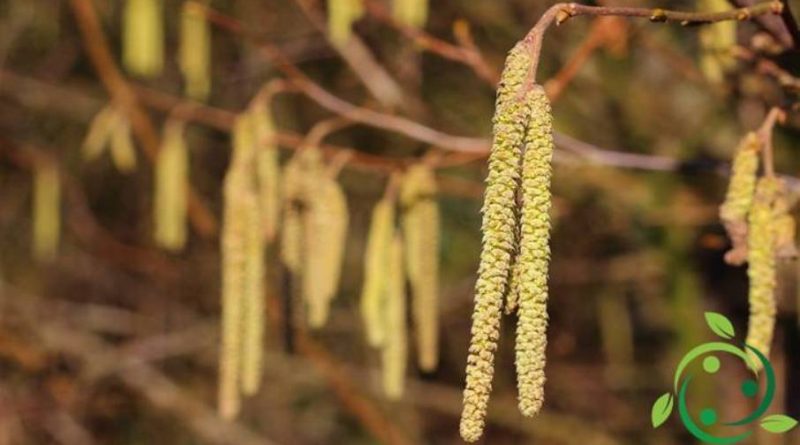 Anemophilous pollination means that form of pollination whereby the pollen is spread by wind. The term anemofilo in fact comes from the composition of anemo- and –filo and where, in turn, the term anemo derives from the Greek ἄνεμος “wind “.
Anemophilous pollination is a form of pollination adopted by almost all gymnosperms and other plants such as the Poaceae (also commonly known as Gramineae); other common anemophilous plants are oaks, chestnuts, alders and plants of the Juglandaceae family (to which the Walnut belongs).
The plants that use anemophilous pollination are often characterized by the lack of perfume by their diffusion organs, the lack of showy floral parts (with the consequent presence of inconspicuous flowers), the reduced production of nectar and the production of a huge number of pollen grains.
This characteristic therefore also has morphological repercussions with respect to species that use other forms of pollination such as entomophilous or zoophilous (whose pollen is spread respectively by insects and vertebrates).
The pollen grains of the anemophilous species, in order to perform this function better, are lighter and not sticky, so that they can be easily transported even by very light drafts. Their size fluctuates between 20 and 60 microns in diameter on average, although the pollen grains of Pinus species may be much larger and much less dense.
Another characteristic of the plants that use anemophilous pollination is that they possess stamens well in evidence so that the pollens are exposed to wind currents, and a large and plumed stigma to easily trap pollen grains in the air. Ultimately, both the diffusion and catchment organs are much more showy and able to interact with air currents.
Furthermore, since the anemophilous plant pollen is smaller and lighter than the pollen of the species that use entomophilous pollination, this has a very low nutritional value for insects.

However, in certain situations insects collect pollen from anemophilous flowers at times when pollen with higher proteins from entomophilous flowers is scarce.
Another interesting feature of the pollen of anemophilous plants is that they can also be caught inadvertently by the electrostatic field of bees. This would explain why, although bees do not visit the flowers of plants of the genus Ambrosia, its pollen is often found in honey that is produced during the flowering of these plants.
However, other flowers that use anemophilous pollination can be visited by bees and hornets that frequently collect pollen from corn and other cereals.
Anemophilous pollination is also an adaptation of plant species that helps to separate male and female reproductive organs within a single plant, thus reducing the effects of inbreeding. In this case we are witnessing the presence of male and female reproductive structures on separate plants. A characteristic linked almost exclusively to the pollen of anemophilous plants is that relating to respiratory allergies. In fact almost all the pollens that are allergens come from anemophilous species; among these species, it is up to the Poaceae the role of major producers of aero-allergens in most temperate regions, where are the species of plains or grasslands that produce more pollens than mountain or marsh species.