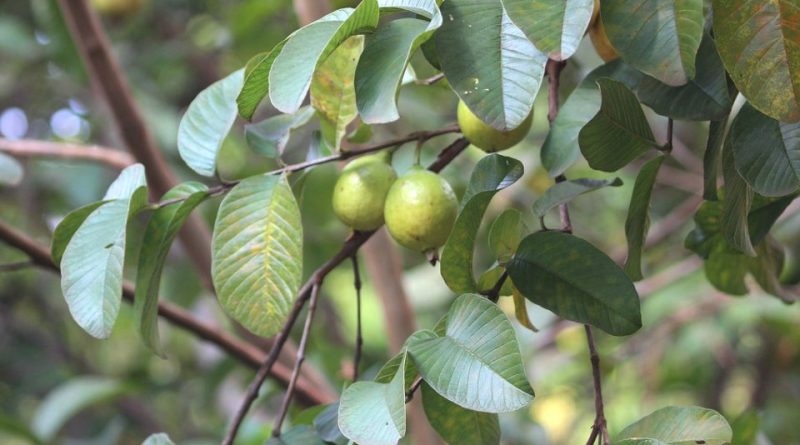 The guava (Psidium guajava L., 1753), is an arboreal species belonging to the blueberry family.

Systematics –
From the systematic point of view it belongs to the Eukaryota Domain, United Plantae, Magnoliophyta Division, Magnoliopsida Class, Myrtales Order, Myrtaceae Family and therefore to the Genus Psidium and to the P. guajava Species.

Etymology –
The term Psidium comes from the Greek ψιδιον psidion, pomegranate in Dioscorides: for the similarity of the fruits; the ancient Greek name derives from ψίω psíø to break, to shred, in reference to the numerous small seeds. the specific epithet guajava derives from guayaba, the Spanish name of the fruit of this plant, called guayabo.

Geographical Distribution and Habitat –
Guava is a species native to Central America in an area between southern Mexico and Central America; the plant is widely cultivated in tropical countries, both at a family and industrial level. In the Mediterranean basin, although there are favorable conditions for cultivation, it is present only sporadically. 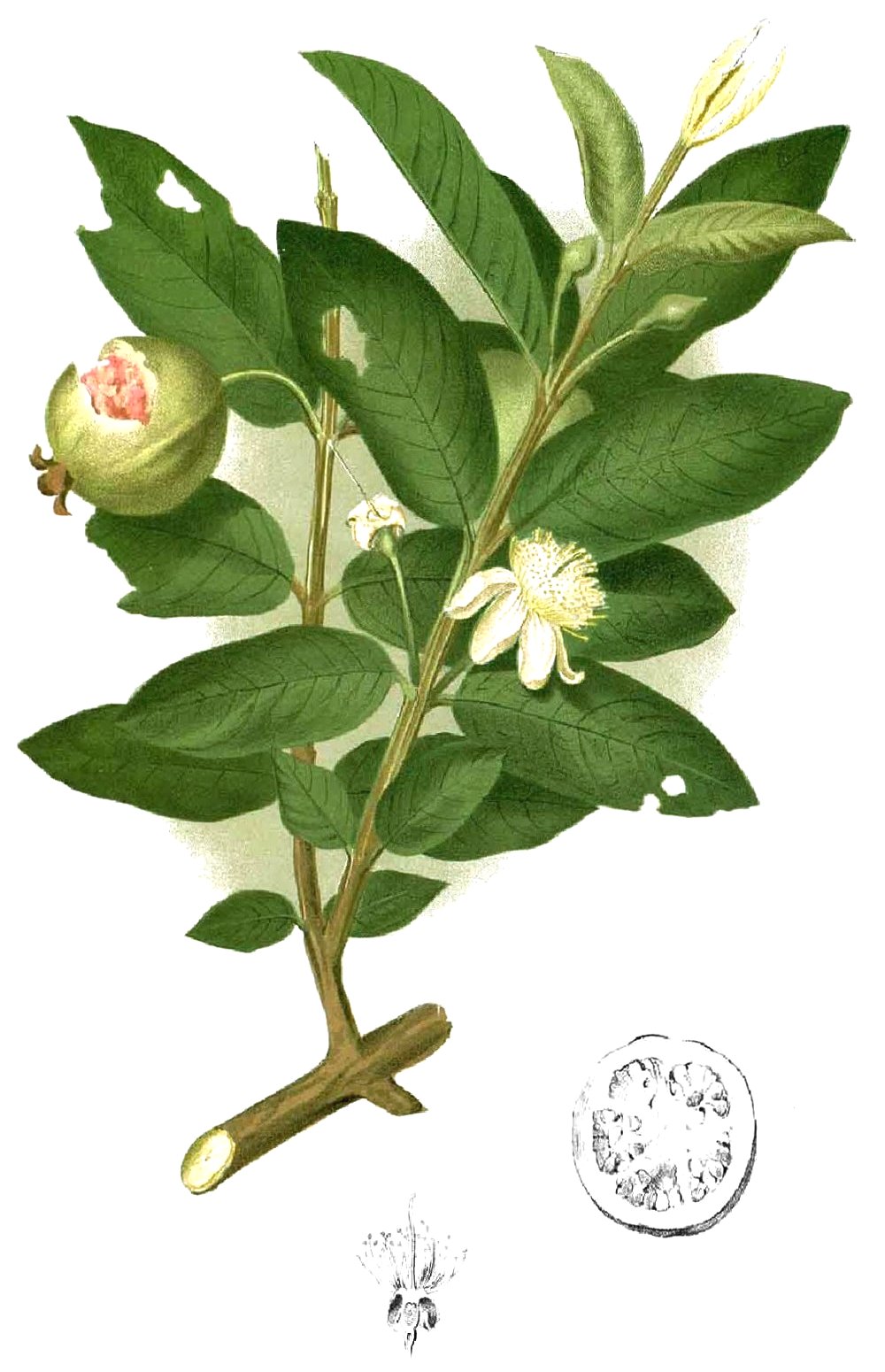 Description –
Psidium guajava is a small tree of height between 2 and 7 meters, with straight and branched trunk and with hard wood. The bark is greyish in color with brown spots. The leaves are light green. The flowers are white, large, fragrant, solitary or grouped in small clusters.
The fruit of the guayabo has a variable shape (spherical, elliptical, pear-shaped), with colors between yellow and green-yellow; it is smooth or wrinkled, with white or white-yellow or pink or red flesh, with a sweet, bittersweet or sour taste, with numerous seeds, small and white.
The weight of the fruits varies between about 130 and 800 g, with an average weight of 390 g / fruit.

Cultivation –
The Guava is generally propagated by seed but also by agamic (rooted sucker, cutting, grafting, layering). The plants thus obtained are planted with 4-5 x 5-6 and can last 15-20 years.
It is a rustic plant that withstands temperatures up to 0 ° C. In case of low temperatures it loses all or part of the leaves. for its cultivation it is good to choose light soils, although this species can also grow on heavy ones, provided they are well drained. The pH must be neutral in order to avoid ferric chlorosis that occurs easily on calcareous alkaline soils.
It is a plant that needs limited pruning and needs fertilizing with greater nitrogen intake than phosphorus and potassium. For this reason organic fertilizers are optimal.
Fruit ripening is scalar both on the plant and between different plants. Due to its characteristics, Guava can also be grown in Italy in the southern coastal areas and especially in Sicily. Production per hectare varies from 150 to 200 quintals. Over time, around 150 varieties have been produced.

Uses and Traditions –
This plant, often called also with the Spanish name Guayaba, is also known as Guiava, Guiavo, Psidio, Pero delle Indie.
The tree is very cultivated for the commercial value of its fruits.
From the area of ​​origin of Central America this plant was then spread by humans, birds and other animals in all the temperate-warm areas of tropical America and the West Indies (from the 16th century).
The guava was already known to the Aztecs, who called it Xalxocotl (sand plum); in later times the first historical records date back to the first decades of the sixteenth century by Hernenz de Oviedo. Today guava is mainly cultivated in the Arab world and in the Philippines.
These fruits represent, in the main production areas, a very important food as they contain numerous mineral salts, lots of vitamin C and few calories: a guava brings on average 150 calories.
The ancient inhabitants of Central America used the entire plant, from the foliage they obtained infusions and medicated decoctions, thanks to the antiseptic power of the active ingredients contained in the plant.

Preparation Mode –
The fruits of Psidium guajava can be eaten both fresh and transformed into juices, nectars, jams.
They are also used for the preparation of goiabada, a popular dessert in the Portuguese-speaking regions.