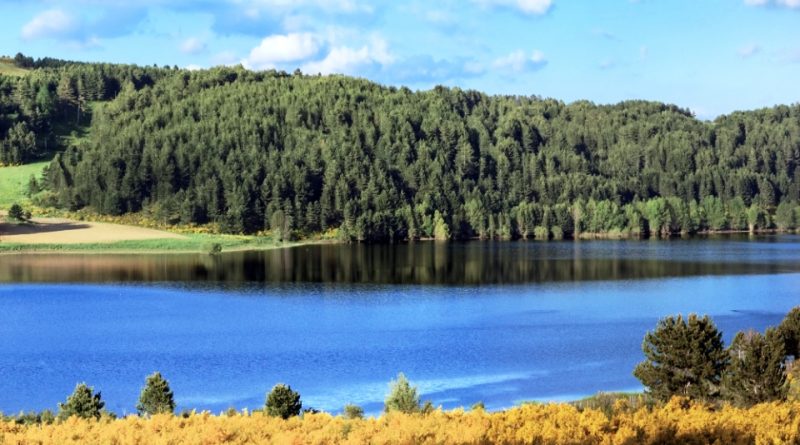 The Sila National Park, which has WDPA Code 182736 and EUAP Code 0550, is one of the most evocative and wild areas of the Region with vast and splendid forests, spread out over gentle plateaus, with thrilling landscapes also stretching over the Pollino, the Aspromonte, the ‘Etna, on the sunny sea of ​​the Ionian Sea and on the Tyrrhenian Sea, in which, with the clear atmospheres, it remains enchanted to observe the imposing Aeolian rising.
The Sila National Park is located in the heart of the Sila, covering an area of ​​73,695 ha, taking an elongated north-south shape. The park is located in Lorica, while the perimeter involves three of the five Calabrian provinces, the Province of Catanzaro, the Province of Cosenza and the Province of Crotone. Of the 19 municipalities that fall within the protected area, 9 are in Province of Cosenza (Acri, Aprigliano, Bocchigliero, Casco del Manco, Celico, Corigliano Calabro, Longobucco, San Giovanni in Fiore, Spezzano della Sila), 6 in the Province of Catanzaro (Albi, Magisano, Petronà, Sersale, Taverna, Zagarise) and 4 in the Province of Crotone (Cotronei, Mesoraca, Petilia Policastro, Savelli).
From an administrative point of view the Sila National Park was established in 1997 with the law n. 344, while the definitive institution took place by Decree of the President of the Republic on November 14, 2002, after a political process started in 1923, when in Italy serious talk of protected natural areas began, establishing the first national parks.
The International Coordinating Council of the MAB Program (Man and the Biosphere Program), during its 26th session in Jönköping in Sweden, approved the enrollment of the Sila as the 10th Italian Biosphere Reserve in the World Network of sites of excellence of the UNESCO.
The Sila National Park is located in the largest plateau of Europe, in an area of ​​significant naturalistic, environmental and historical-cultural interest, consisting of Sila Grande, Sila Greca and Sila Piccola.
Its geological characteristics, together with those due to its geographical position, determine a series of landscapes unique in the world. The Sila in fact, covered with trees and not by chance nicknamed “Gran Bosco d’Italia”, has been exploited for millennia (since the times of the Magna Grecia) for its timber used then in the construction of ships, houses, churches.
The Park area is characterized by the richness of water, the extraordinary presence of woods and ancient forests which make up 80% of its surface, for its three large artificial lakes, used for the production of electricity and which they supply drinking and irrigation water, and are easy to access thanks to the geomorphological conformation and the numerous itineraries and paths that make it mostly passable on foot, on horseback and by bicycle.

Territory –
The territory of the Sila National Park is located within the wider Sila plateau and belongs to the mountainous system of the southern Apennine chain. The Sila is a quadrilateral acrocoro, with the longest side oriented in a North-South direction and the shortest in the East-West direction, bordering to the north with the plain of Sibari, to the west with the Crati valley to the south with the plain of Lamezia and to the east with the hills of the Marquisate.
The area is characterized by a series of broad plateaus, which on average exceed 1,300 m above sea level and from which numerous mountains rise, the highest of which generally exceed 1,700 m of altitude. The highest peaks are distributed along a strip that follows the western rim of the crater, including Monte Botte Donato, which at 1,928 m represents the highest peak, Monte Scuro (1,621 m) and Monte Curcio (1,768 m) .
The territory is commonly divided into Sila Grande, Sila Greca and Sila Piccola, denominations that do not have a precise morphological meaning, but derive from ancient administrative divisions. The name Sila comes from the Latin silva, demonstrating the richness of forests, since ancient times, of this territory, which still today is characterized by extensive forest formations consisting largely of pine forests of laricio pine and beech woods. Although it has undergone human exploitation since Roman times and then changed its original features over the centuries, silane forests still constitute a natural heritage of great importance and biogeographical and faunal interest.
The origins of the Sila plateau can be traced back to a much more remote geological era than that of the Apennine orogeny.
The silane landscape is the result of the particular physical environment, varied and scarcely tormented, on which a diversified fauna, a complex vegetation and a moderate human presence are adapted, which constitute interacting systems. It highlights a plurality of landscapes ranging from the mountain type to the hilly one and the flat one divided into alluvial, valley and terraces.
In the forest landscape, endowed with a high biodiversity, there is a forest heritage, of considerable commissions and of considerable ecosystem value, which must therefore be adequately safeguarded and preserved.
There are marginal territorial areas, neglected by modern development processes, in which there are sites in which resources and values ​​have been preserved in substantial integrity.
The same is necessary that they are used, by the local communities, in an optimal way in order to favor their recovery, stability and duration. The agricultural landscape is more specifically the result of an interaction between man and environment, in continuous becoming especially as as a consequence of the changing social conditions, but also of the evolution of culture and the progress of agricultural technology.
The agricultural landscape of the Sila has been scarcely modified by the technological impact and this has prevented the human needs on the characteristics that the natural environment had preserved over the centuries from taking over.
Silana agriculture is still, for the most part, traditional, and has managed to preserve its balance and maintain its characteristics, avoiding significant genetic erosion and substantial falls in diversity. The growth process of human settlements in rural and periurban areas has been moderate in most of the sites. It is however necessary to monitor any excesses of anthropic pressure, regulating the trends of transformation and use of the land, protecting areas with a strong naturalistic and environmental value and diversifying times and ways of enjoyment. Ultimately, it will tend to favor the integration of the development processes with the particular peculiarities of the areas concerned, developing a suitable planning that is able to enhance the landscape resource of the Sila while enhancing the valuable functions that are already given due consideration. Good results can be obtained with the implementation of adequate policies for territorial rebalancing and social cohesion. The aim is to continue to guarantee travelers visiting the Park the chance to still admire a largely primitive, intact, attractive and evocative landscape.
In the Park there are the most significant species of the Sila area that with the splendid blooms, mainly spring and summer, integrate the green of the surrounding pastures and woods, creating a pleasant and relaxing landscape suggestion and highlighting the enormous overall naturalistic importance. In spring the first flowers that appear are the saffron, the forget-me-nots, the primroses, the cyclamens and a colorful multitude of violets. As the season progresses, the blooms of various species of orchids explode, including the bird’s nest orchid, buttercups, anemones, muscari, gladioli, daffodils, nasturtiums, crocuses, of the alissi, of the lilies, of the geum, of the mallows, of the myosotes, of the veroniche, of the thyme, of the bluebells, of the verbenes, of the oregano, of the mind, of the chamomile, of the anise, and others. Among the last to bloom, before the advent of the winter season, are the colchici; with the fall the blooms finish, the spectacular and iridescent coloring of the deciduous vegetation is highlighted, which acts as a contrast to the splendid green of the larch pine and the silver fir. These are singular cenoses favored by the siliceous soil and Mediterranean climate, made mild thanks to the influence of the neighboring Ionian and Tyrrhenian seas.
In the Park it is forbidden to collect and damage the spontaneous flora, except in the territories where agro-pastoral activities are permitted and in compliance with the local civic uses legislation. 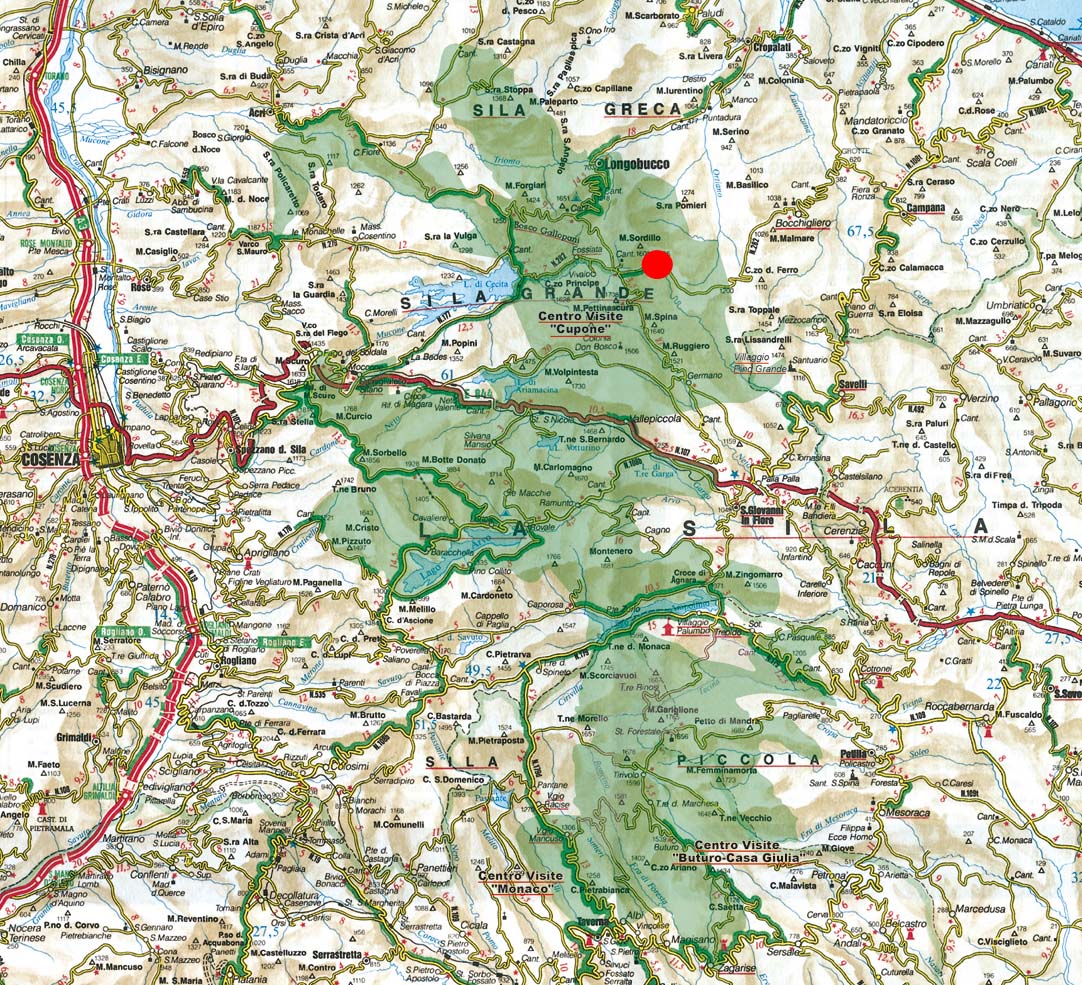 Fauna –
The animal biodiversity of the Park territory as a whole includes 175 species of native vertebrates, subdivided as follows: Mammals 65; Birds 80 (considered only nesting); Amphibians 12; Reptiles 16; Pisces 2; without counting the alien entities and those of occasional or erratic appearance.
The invertebrate fauna is obviously much larger, estimated at around 4,500-5,000 species, including the 14 endemic species of Calabria. The fauna, that is the set of animal species that inhabit a region, is one of the constituent elements of the ecosystem. It is therefore affected by the interaction between various elements, such as climate, ecological environments, human intervention.
Calabria, subject to various glaciations and different mutations of the vegetation characteristics, hosted in its evolution, very different animal species, whose identification and classification was possible thanks to numerous fossil finds. The presence of hippos, elephants, bison, bears and deer is certain in the various eras. The last to disappear, and not due to natural causes but rather to the hunt to which they were subjected by man, were the bear and the deer. Of the latter we have traces until the beginning of this century.
Obviously the disappearance of animal species almost always leads to an impoverishment of the ecosystem and it is against this trend that the management of Protected Areas moves. For example, the mere fact that the wolf, the largest carnivorous predator that closes the cycle of the food chain, is present in Sila and Aspromonte would justify the establishment of a Park.
But there are still many species worthy of note and of which we will get to know in the context of their subdivision into classes: mammals and birds. The Park territory hosts the typical fauna of the Apennine areas. The botanical and orographic differences between the Sila and the other Protected Areas of the region, as well as the geographical location of the three areas, make that the complex of faunal species present in the Park is mutually enriched.