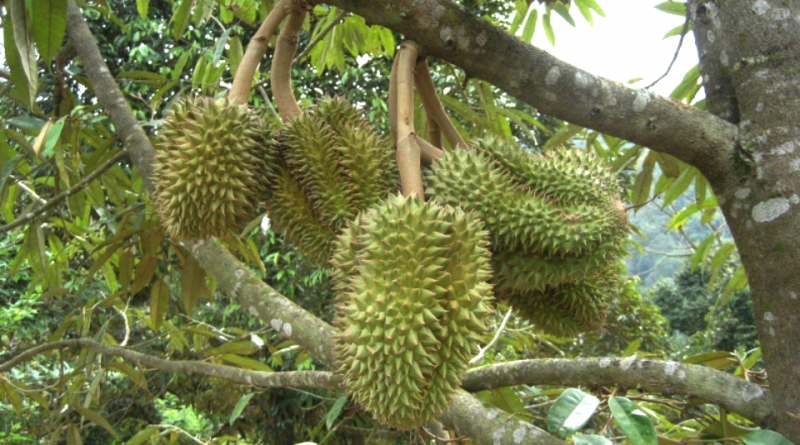 Durian (Durio zibethinus L., 1774) is an arboreal species belonging to the Malvaceae family.

Systematics –
From the systematic point of view it belongs to the Eukaryota Domain, United Plantae, Magnoliophyta Division, Magnoliopsida Class, Malvales Order, Malvaceae Family, Helicteroidea Subfamily, Durioneae Tribe and therefore to the genus Durio and to the species D. zibethinus. It is synonymous the term Durio acuminatissima Merr.

Etymology –
The term Durio comes from durian (or durion) which is the Malay vernacular name for the spiny fruit of this plant, where duri means thorn. The specific epithet zibethinus comes from the name of the Indian owl Viverra zibetha, a carnivorous mammal; according to Linnaeus because the fruits of this plant were used to capture it, but others argue because the mossy smell of the fruits would be similar to that of this animal.

Geographical Distribution and Habitat –
Durian is a tree originating from south-east Asia and in particular from Malaysia and Indonesia. It is a secondary species cultivated for fruit production; commercial production is mainly concentrated in Thailand, Malaysia, Indonesia, the Philippines, Vietnam, India, Puerto Rico and Australia. 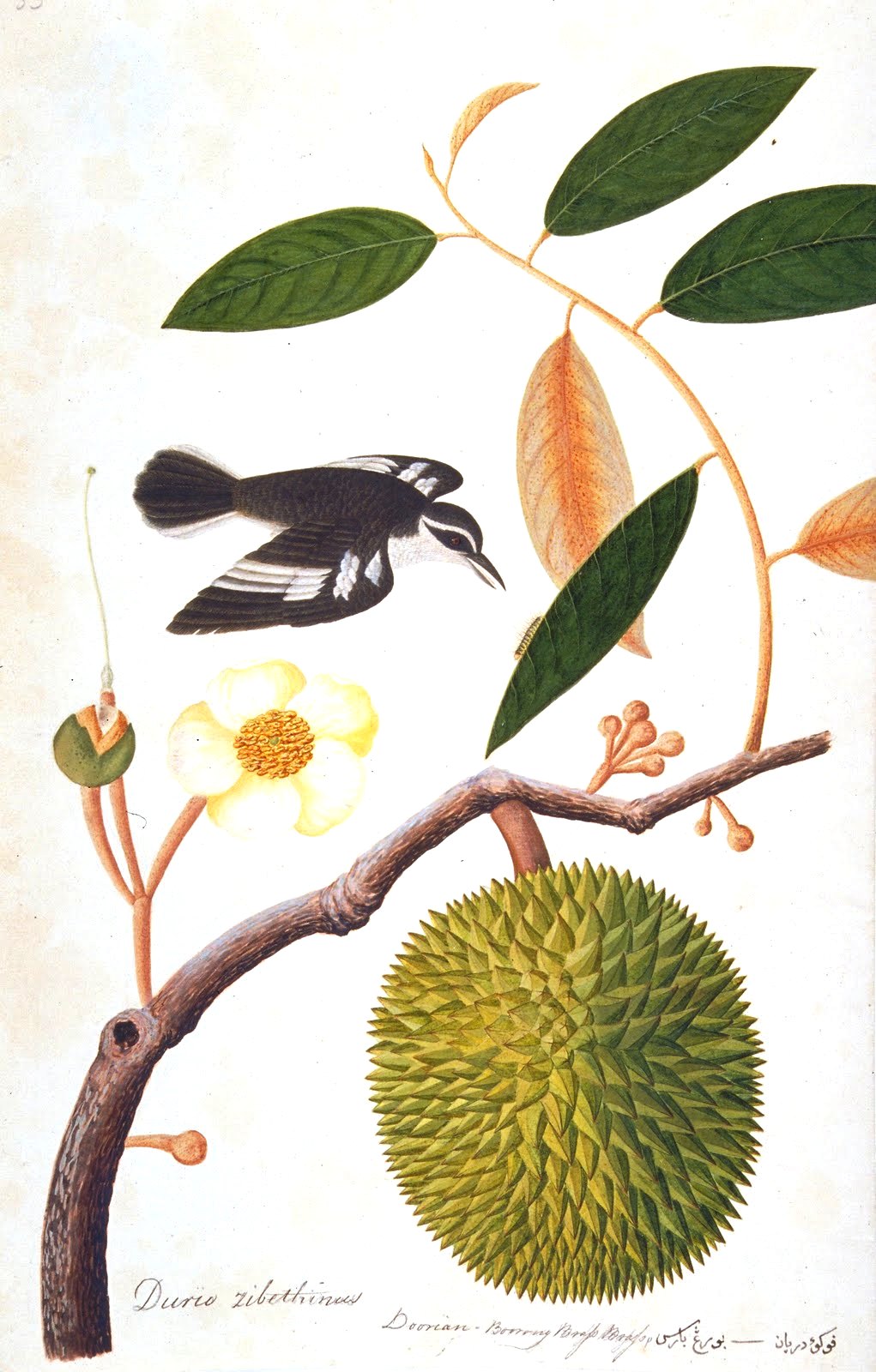 Description –
The Durio zibethinus is a large tree, characterized by a straight trunk and more than 40 meters high.
The leaves are alternate, up to 25 cm long. and about 8 cm wide; they are green and shiny on the upper plate and silver-bronze on the lower one. The flowers are large, whitish, with a strong smell, with night flowering. The flowering (in Puerto Rico) is in the period between April and May and the fruits are ripe in August-September.
It produces large fruits (15-30 cm long), with a hard, greenish-brown epicarp, covered with rather sharp spines, generically pyramidal in shape that make handling difficult if you are not wearing gloves. The pulp is whitish or yellowish in color, divided into five segments and surrounds the large seeds; the smell is absolutely nausen (similar to a rotting carrion) but the taste is truly sublime.

Cultivation –
Durian is a plant that, to be cultivated, requires a tropical climate with abundant rainfall distributed throughout the year. It prefers fertile and deep, clay-sandy or clay-loam soils with excellent drainage, rich in organic substance and with a pH between 6 and 7. The plant benefits greatly from the fertilizer inputs and, in the case of dry periods, has need rescue irrigation.
The average yield for each mature tree is about 50 fruits per year; each fruit weighing from 1.5 to 4 Kg. It can be propagated by seed or by grafting cutting. The seeds should be planted very early as they quickly lose their viability. Germination occurs after about a week and is fast growing. Grafted trees begin to produce fruit after 4-5 years, while seed plants take 15 years. Grafted plants are smaller in size than those that grow in the wild. There are more than 100 durian cultivars.

Uses and Traditions –
The Durio zibethinus is characterized by a smell of its very intense fruit that resembles a whole of garlic, onion, very strong and seasoned cheese and very discernible tones of ripe fruit. The cause of this odor is to be traced in the rich variety of volatile compounds released by the fruit which include, thiols, esters, hydrogen sulphide, and diethylsulfite. However, there are some odorless cultivars. The edible part, the aril, corresponds to 20-35% of the weight of the fruit, and has a soft and creamy consistency and a color that can vary, as mentioned, from cream white to yellow.
Durian contains 147 kcal per 100 g. In addition, 100 g of product contain: Greases 5 g, Cholesterol 0 mg, Sodium 2 mg, Potassium 436 mg, Carbohydrates 27 g, Fibers 3.8 g and Proteins 1.5 g.
Durian is in effect a “superfood”: according to some studies in 2011, on the antioxidant properties of the main exotic fruits, it showed that at the level of ascorbic acid it is surpassed only by Salak, Mangosteen and Kiwi. Durian is first, with great detachment, as regards the flavonoid content, on average ten times as much as the other fruits, especially caffeic acid and quercetin, with antiviral and preventive actions of tumors.
It is also the first in the field of anthocyanins, containing twice as many as those contained in Salak and is second in the ranking of beta-carotene (of which the Mango is the one that contains the most). It is a powerful regulator of cholesterol, and helps prevent arteriosclerosis. It has a combined richness of vitamins B1, B6, C, B2, moreover it contains tryptophan, metabolized as serotonin, and therefore regulates sleep and nerve activity.
The contraindication of this fruit, so particular, is the unpleasantness of its odor which makes it not very transportable and can be stored indoors. In fact in the airports, on the buses and in the hotels of the countries of origin the prohibition to transport the durians is indicated precisely because of its pungent smell.
The complexity of flavors of durian (which also varies considerably with the individual varieties) is composed of an incomparable richness of those that in music would be called “the harmonics”, or of a sophisticated range of tones and undertones so intricate to amaze anyone. A ripe fruit at the right point is very refreshing and very sweet and the main tastes that define it resemble honey, jasmine, caramel, coffee, vanilla, chocolate; the aftertaste that accompanies it are endless: mustard, garlic and onion, sherry, almond, walnut, resin, eggs, blue cheese, sweet tuber, pineapple, papaya, pumpkin, etc. However, almost unanimously, consumers describe this universe of flavors as harmonious and absolutely delicious.
Leaves, fruits and roots also have healing properties (antifebbrili, against jaundice and for the treatment of skin diseases).
In addition to being human, various animals are fond of this fruit, especially the tiger, the elephant, the squirrels, the orangutan and many birds.

Preparation Mode –
The great fruits of the Durio zibethinus are characterized by a nauseating and often repellent scent, but by a heavenly taste (sweet and spicy, like vanilla ice cream with hints of spice and banana). Durian pulp is generally consumed fresh, but is also used to prepare ice cream, biscuits and sweets. It can also be preserved in a box, frozen, cooked in sugar or salted. It is also used to prepare sauces and condiments. The seeds are edible, after being boiled, fried or roasted.