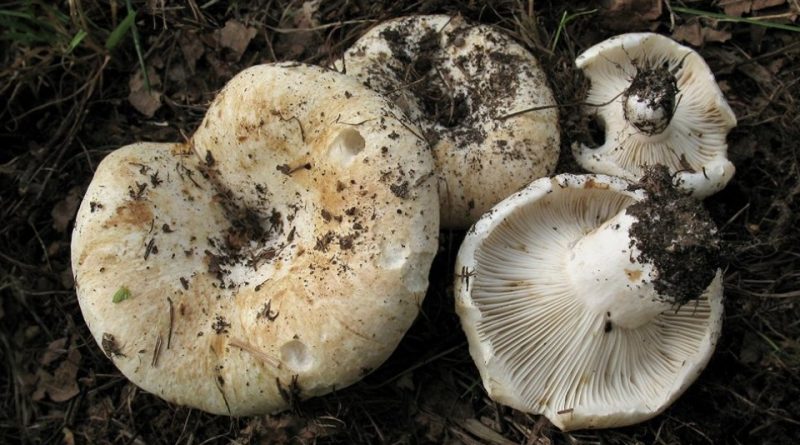 The milk-white brittlegill (Russula delica Fries, 1838) is a basidiomycete fungus belonging to the Russulaceae family.

Systematics –
From the systematic point of view it belongs to the Eukaryota Domain, Fungi Kingdom, Phylum Basidiomycota, Class Basidiomycetes, Russulales Order, Russulaceae Family and therefore to the Genus Russula and to the R. delica Species.

Etymology –
The term Russula is the diminutive of red rússa: that is red, due to the color of many species of this genus. The specific epithet delica comes from delicor, devoid of mood, latex.

Geographical Distribution and Habitat –
Russula delica is a fungus that grows in broad-leaved forests in calcareous or siliceous soils, almost always appearing in more or less numerous groups that sometimes cover whole glades. Often its presence in the ground is indicated by a pile of raised leaves under which it hides. It is a fungus that lives in symbiosis with many tree species, broad-leaved trees and conifers. The type of mycorrhiza that forms with the roots of the host plants is of the ectotrophic type, that is with the hyphae of the fungus that surround the cortex of the roots.
The fruiting period runs from the end of spring to autumn, although it often appears mostly in the fall. 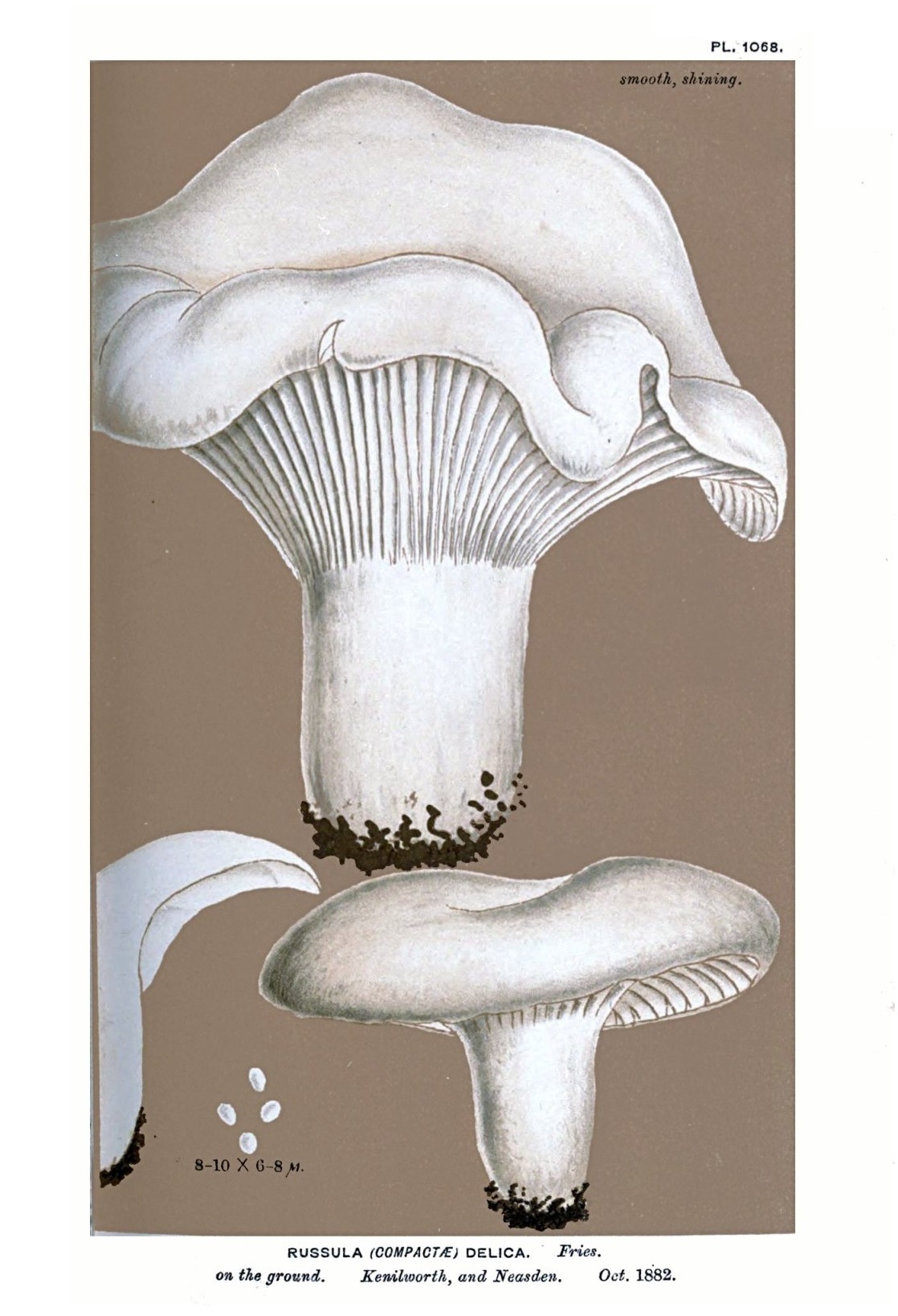 Recognition –
It is recognized for the hat on average between 5 and 15 cm, with specimens that go even over 20 cm; this is convex, soon depressed in the center and finally funnel-shaped at maturity; hard, fleshy, with inseparable cuticle, dry, pruinose, with radial fibrils, wrinkled, whitish with scattered traces of hazel or cream-ocher hues, often dirty with soil or plant residues.
The margin is convoluted, then folded towards the lamellae, more or less lobed-wavy.
The lamellas are rigid, spaced (4-8 in a cm), white to cream in color with reddish spots in old age, sickle-shaped, fragile and rigid, interspersed with numerous lamellulae (between one lamella and the other there is always at least one lamellula), as high as the flesh of the hat or more, adnate, with a tendency to run along the stem, when young they are often embellished with watery droplets.
The stem is 4-8 x 3–5 cm, cylindrical, short, stocky, firm, with a color ranging from white to ocher, with brownish spots, a surface that is at first uniformly opaque then satin, which can become wrinkled.
The flesh is quite firm, white in color, both in the cap and in the stem, brown when cut after exposure to air, resistant in young specimens, in adults easily subject to breakage in the edge of the cap, with fruity smell of fish and sweet taste .
At the microscope, spores of 8-11 x 7-8 µm are noted, of a cream-white color in mass, elliptic or subglobose, warty.

Cultivation –
Milk-white brittlegill is not a cultivated mushroom.

Uses and Traditions –
The Russula delica is perhaps the largest of the Russules which is edible from fair to good when young, although it is estimated precisely because of the consistency of the meat by some. In fact, especially in Umbria, the Marche and Puglia, this mushroom reaches high prices on the market.
Among similar species we recall the Russula chloroides (Krombh.) Bres., Very similar which is distinguished by the characteristics of the thicker and lower gills and by the regularly funnel-shaped cap. In both species, but more frequently in the second one can be observed the presence of a narrow bluish belt at the apex of the stem. Both species carry soil residues on their hats during growth. Having a very consistent meat and not good organoleptic characteristics, its consumption is not recommended.
In any case, even if the macroscopic difference between Russula delica and Russula chloroides in the recent past was made by giving priority to the relationship between meat and the lamellae of the cap, the blue reflections of the hymenophore and the top part of the stem; these assessments no longer seemed to be discriminating. These characters today seem to be very labile and outdated, so we rely with greater conviction on the macro-chemistry and microscopy that seem more reliable and discriminating.
Another possible confusion can be made with J.Lange Russula pseudodelica, similar to R. delica, but with lamellae with pinkish or yellowish iridescence and herring odor and with Russula pallidospora, with a never acrid taste, and ocher lamellae with orange reflections with age.

Preparation Mode –
The Russula delica which is an edible mushroom, mediocre but good-excellent in younger specimens, can be eaten only after prolonged boiling; otherwise it may cause gastrointestinal disorders, even if they are minor.
The major qualities that are recognized to this mushroom, especially by admirers, are the firm and crunchy meat and to be spicy, the latter characteristic is enhanced when the mushroom is consumed cooked on the grill. Ingested in large quantities it gives a kind of drunkenness, much appreciated especially by those who eat it in company and accompanied by abundant libations. It is consumed alone or mixed with other mushrooms. Preserves very easily. Very indicated methods are freezing and storage in salt water and sterilization in a water bath.