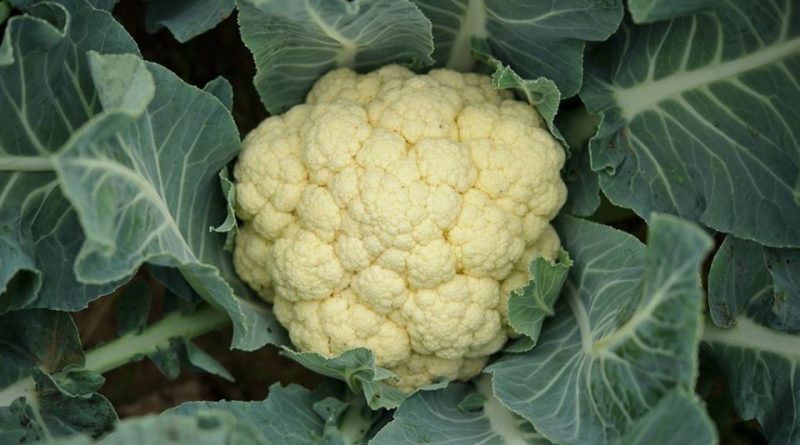 Cabbage (Brassica oleracea L., 1753) is a herbaceous species belonging to the Brassicaceae family.

Systematics –
From the systematic point of view it belongs to the Eukaryota Domain, United Plantae, Magnoliophyta Division, Magnoliopsida Class, Capparales Order, Brassicaceae Family and therefore to the Brassica Genus and to the B. oleracea Species.

Etymology –
The term Brassica comes from brassica, the Latin name of cabbage described by several authors, attested in literature starting from Plautus (III-II century BC). The origin of this name is uncertain and has been traced back to Greek or Celtic voices, without totally convincing evidence. Several etymological texts refer to the word Βράσκη braske, according to Hesychius used by the Italics in Magna Graecia to indicate cabbage. The specific epithet oleracea is derived from ólus óleris, vegetable: because it is used as a vegetable.

Geographical Distribution and Habitat –
The cabbage is a plant cultivated for a very long time that has allowed, among other things over the centuries, the selection of many varieties and cultivars. The wild form from which all these types originated (Brassica oleracea subsp. Oleracea), originated from the Atlantic coasts of Western Europe. 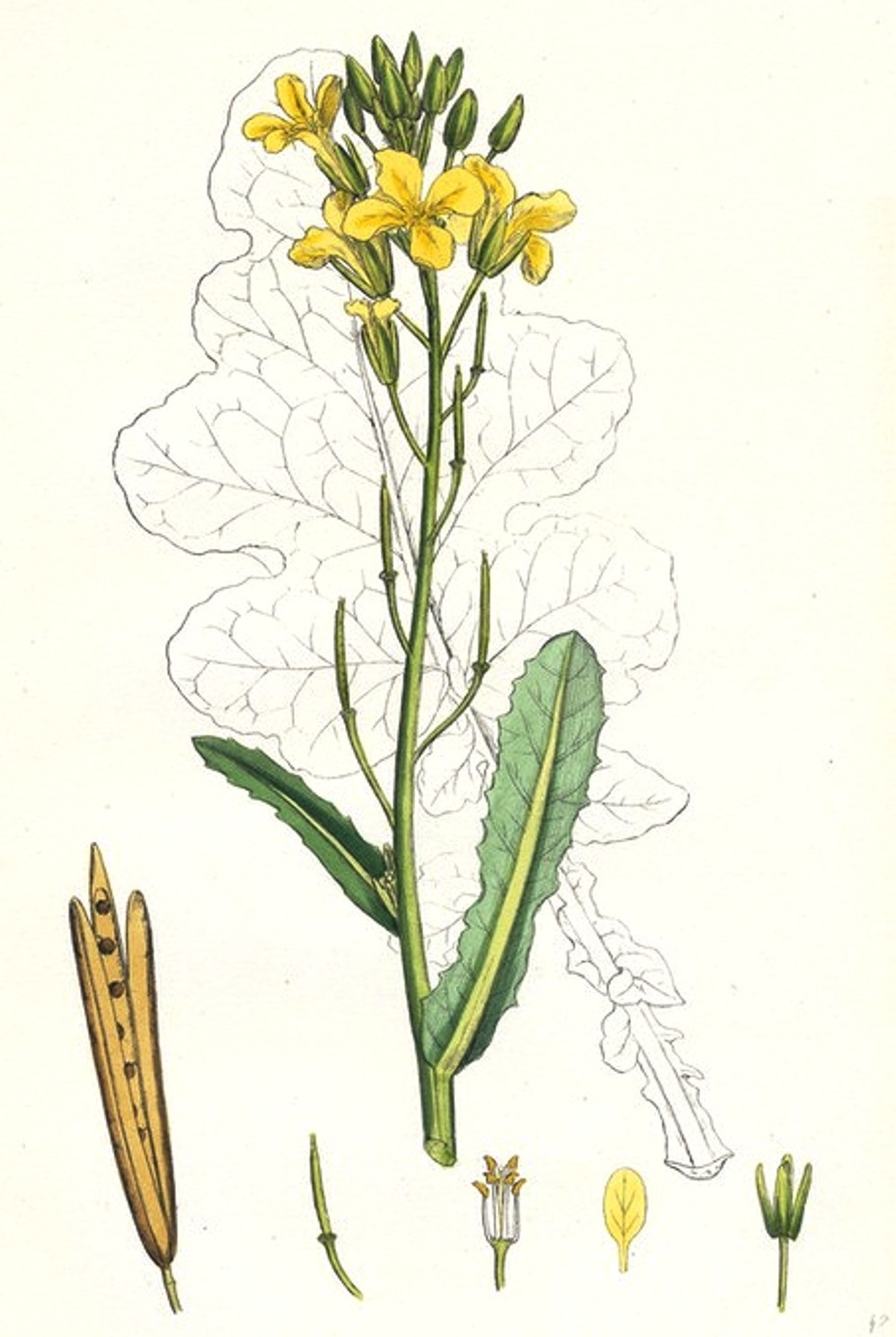 Description –
Brassica oleracea is a biennial plant that typically forms a rosette of leaves during the first year of life. In the second year, a more or less high inflorescence is formed which carries numerous yellow flowers with four petals and, after fertilization, generally crossed and entomophilous, give rise to the formation of a siliqua carrying numerous round seeds, of a bluish black color (the weight of 1,000 seeds is equal to 4-6 grams).
The plant, if left to develop, grows up to 1.5 meters high, forming abundant branches with flowering twigs.

Cultivation –
Brassica oleracea is a species that adapts well to all types of soil, provided that these are deep, well-ventilated and fresh, well endowed with organic substance and with a pH around neutrality. The plant prefers temperate-cold and humid climates and tolerates cold but not frost. For its complete vegetative cycle the cultivation of cabbage requires transplant irrigation and in the head enlargement phase.
It is an intercalary crop and leaves a good residual fertility both for the considerable mass of crop residues and for the type of cultivation operations required.

Uses and Traditions –
Cabbage has a historical tradition that is lost in the mists of time. “Marcus Cato and Apicius praised the cabbage so much that all the virtues and flavors of the herb came to be described in this; that is to say that even the ancients were very avid of this leaf, since they are the modern ones … “.
This is how the great eighteenth-century chef Vincenzo Corrado praises the cabbage, in his all-vegetable cookbook entitled “Of the Pythagorean food, or Herbaceous for use by nobles and literary men” (Naples 1781). It is necessary to warn that Corrado’s recipes would be for us not very vegetarian in the strict sense, since the cabbage is cooked in meat or fish broth, seasoned with butter, cheese, ham or brains …. In ancient times the family of barassicaceae or crucifers enjoyed an extraordinary fame, not only as a food suitable for all seasons, raw or cooked, but also as a remedy for a variety of diseases (including impotence and drunkenness). Cato the censor was a great consumer and admirer of the cabbage, considering it the most tangible sign of the goodness of the natural remedies of the Roman tradition, to oppose the dangerous manipulations of Greek medicine.
Even a few decades ago in the imagination of farmers, the vegetable also had a particular symbolic value. The central leaves of the cabbage (cap) were assimilated to the female sex while the stem (caulis in Latin) represents the male member. Hence the belief that children were born under cabbage.
In addition to the transparent allusions mentioned, it should be added that to the peasant women who with their two hands pull out the “head” from the ground and cut the root (the “umbilical cord”) is popularly given the name of “midwives” .The cabbage is a plant that, in addition to human nutrition, is used in various cultivars in various ways: from a forage plant to an ornamental plant.
Cabbage has modest nutritional content; it has modest amounts of carbohydrates and even less protein. For mineral compounds, and microelements present in a wide variety, it is however very useful for reconstituting the body’s mineral reserves.
It also has a high fiber content and, if combined, as is traditional, with legumes, or carbohydrates, is a well-integrated food contribution.
In addition, due to its vitaminic, remineralizing, and above all promoter effects, the bowel movement performs a preventive action on many tumors (especially intestinal ones), and by constituting a diluent mass and a chemical buffer, it fights duodenal gastro ulcers.
The most important mineral compounds contained in cabbage are: sulfur, calcium, phosphorus, copper, iodine, selenium, magnesium. All cabbages, especially if eaten fresh, are rich in vitamins, especially vitamin B1, and vitamin C.
It should be remembered, however, that cabbage, together with almost all Brassicaceae, have an extraordinary ability to collect and fix in their tissues the minerals contained in the soil, often essential for human nutrition; this quality becomes negative when these plants are grown in polluted soils due to the presence of heavy metals, which are often toxic, such as chromium, lead, arsenic, cadmium.
For this reason, when cabbage plants are grown for food purposes, it is good to make sure that the soils are not polluted by these metals. A typical characteristic of all cabbages is that, when they are cooked, they give off a bad smell; this is due to the large presence of sulfur compounds (sulphides) that are released by cooking.
The sulphides, mostly methyl isothiocyanate, vanish at 90% after 8 minutes of cooking, and the extraction is total after 16 minutes. Among the different varieties of Brassica oleracea we remember:
– Brassica oleracea var. acephala, to which belong the Tuscan black cabbage and the Galician cabbage;
– Brassica oleracea var. alboglabra, the Chinese broccoli (Kay-lan);
– Brassica oleracea var. italica, the broccoli cabbage (eg the romanesco broccoli or the broccoli fiolaro);
– Brassica oleracea var. capitata, the cabbage used for the preparation of “sauerkraut”;
– Brassica oleracea var. capitata rubra, the red cabbage;
– Brassica oleracea var. costata or var. tronchuda, the Portuguese cabbage (trochuda);
– Brassica oleracea var. gemmifera, the Brussels cabbage;
– Brassica oleracea var. gongylodes or L. var. caulorapa, the kohlrabi;
– Brassica oleracea var. botrytis, the cauliflower in the white and green varieties;
– Brassica oleracea var. Savoy, the savoy cabbage;
– Brassica oleracea var. sabellica, the kale;
– Brassica oleracea var. stenter.

Preparation Mode –
This robust vegetable, in its different varieties, has been a food staple for centuries; a must for soups and soups, alone or with other ingredients such as pork in the Lombard casserole. Sauerkraut, sometimes also sausage and other pork cuts, can also be a preserved food stock by controlled fermentation.
In short, it is practically, almost impossible, to cite in a single article the innumerable methods of preparation of this vegetable, from raw to cooked to fermented, also for its innumerable varieties selected over time.