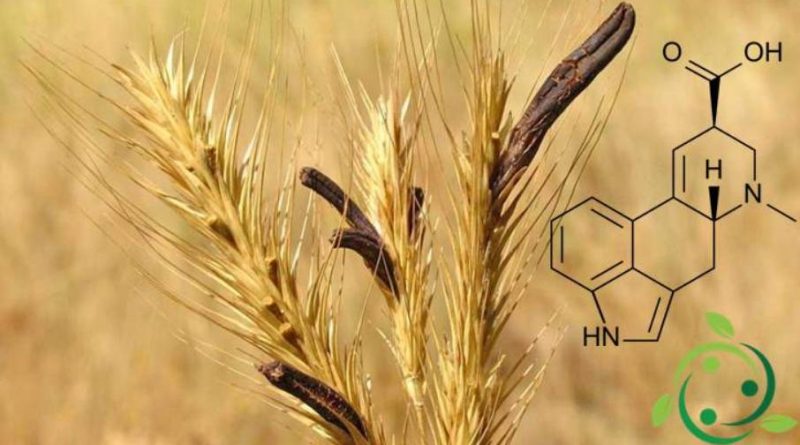 Lysergic acid whose official name in the IUPAC nomenclature is: 7-methyl-4,6,6a, 7,8,9-hexahydro-indole [4,3-fg] quinoline-9-carboxylic acid has a brute or molecular formula C16H16N2O2.
In nature lysergic acid is found in the mycelium of an ascomycete fungus known as Claviceps purpurea (the “Segale Cornuta”), whose form of conservation, the sclerazio, recalls the shape of a small club.
Sclerotia are structures that have the ability to survive for some time as bodies independent of the organism that produced them. Both basidiomycetes, ascomycetes, myxomycetes and especially plant parasitic fungi have the ability to produce them.
These sclerazi are therefore masses of compact and hard mycelium with the shape of small horns that are formed in the spikelets of some grasses, mainly rye.
If taken in the body in high doses, it causes a syndrome called “ergotism”, frequent, especially in the past, due to the food consumption of flours made with grains infected with Claviceps purpurea.

Lysergic acid is the basic component of numerous alkaloids such as ergonovine and is unfortunately known for the fact that it can be used to synthesize a powerful hallucinogenic drug: the famous LSD or LSD25, which chemically is the diethylamide of lysergic acid.
Another compound, LSA, which is the amide of lysergic acid, also known as ergine, is a psychedelic hallucinogen that is extracted from the seeds of Ipomea violacea, and other Convolvulaceae, including Argyreia nervosa and Rivea corymbosa .
Some derivatives of synthesis of lysergic acid, namely diethylamide and monoethylamide, have been shown to have remarkable psychomimetic properties, because their administration causes the development of states analogous to those observed in psychoses. Diethylamide (or LSD) was synthesized in 1938 by A. Hofmann, who in 1943 identified its particular effects; it is active in the dextrorotatory form, at minimal doses, of the order of millionths of g, with neurological effects (spinal hyperreflexia), neurovegetative, by action on the hypothalamus and on the bulb (increase in arterial pressure, breath and basal metabolism; hyperglycemia , oliguria etc.), electroencephalographic (paroxysmal electrical activity at the level of the convolutions of the hippocampus and amygdala) and psychic.
Lysergic acid, extracted from Claviceps purpurea present on the ears of rye or wheat, is currently studied by the scientific community for some of its possible therapeutic properties.