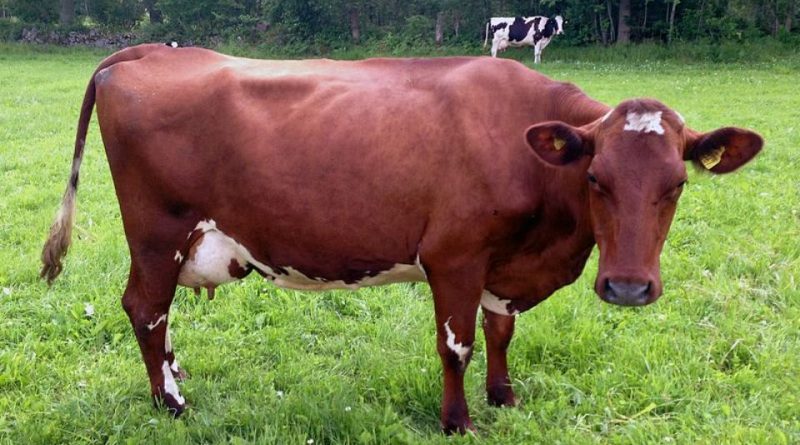 The Swedish Red and White is a bovine breed (Bos taurus Linnaeus, 1758) originally from Sweden, where it constitutes over 60% of the national bovine population.

Geographical and area distribution –
The Swedish Red and White is one of Sweden’s two main dairy breeds and in 2001 it constituted nearly 48% of the national dairy herds, barely exceeding the Svensk Låglandsboskap and the Swedish Friesian breed. In 2014 the total population was reported to little less than 354 000.

Origins and History –
The Swedish Red and White, also called “Svensk Röd och Vit Boskap”, often abbreviated as SRB, is a Swedish breed of dairy cattle. This breed was created between 1927 and 1928 by the crossing of populations of the Swedish Red Piedia (Rödbrokig Svensk Boskap), often abbreviated as RSB and by populations of Swedish breeds of Ayrshire.
A spotted red breed, derived from the English Milking Shorthorn and already present in Sweden previously, represented the largest population in the 1920s, in terms of size; subsequently with the crossings with the Swedish cattle Ayrshire between 1927 and 1928, it gave rise to the Swedish breed Swedish Red and White.

Morphology –
The Swedish Red and White is a breed characterized by cattle with mostly red body color with patchy white; these are medium-sized animals.
The average height of the Swedish red and white spotted breed is about 140 cm, with an average body weight ranging from 500 to 600 kg. The horns are present but pronounced. The muzzle is rosy.
This breed has similarities with cattle in western Finland.

Production aptitude –
The Swedish Red and White is a breed with a predominantly dairy productive attitude.
However, it is a multi-purpose cattle but raised mainly as a breed for milk production. They are in fact animals that also have some potential in the production of meat.
Swedish red cattle are a robust and resilient breed, well known also for their longevity, fertility, ease of birth and udder health. On average, cows give about 8000 kg of milk a year. Their milk is of excellent quality with a fat content ranging between 4.3 and 4.4%, with a protein content of 3.6%.