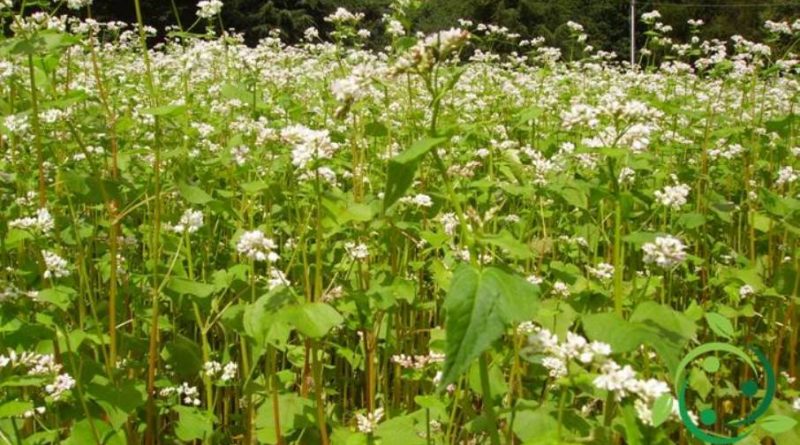 How to grow Buckwheat in an organic way

Buckwheat (Fagopyrum esculentum Moench, 1794) is a herbaceous species of the Polygonaceae family. It is a herbaceous and annual plant that completes its biological cycle in 80-120 days, depending on the different soil and climatic conditions. There are different varieties of buckwheat that differ in the size of the fruit, its color and presence or less than roughness.
In recent years, genetic improvement is working to improve the resistance of this plant at low temperatures, increasing its production and reducing its maturation scale.
From an agronomic point of view, buckwheat is a summer-autumn catch crop; for this peculiarity it can follow cultivations harvested before the middle of July and, once the harvest has taken place, it allows to sow the cereal vernino.In areas where it is not possible to carry out a double cultivation it could be carried out the sowing in the period of May focusing on variety to cycle longer (up to 120 days), thus allowing for greater productions.
Buckwheat is a very rustic species that lends itself well to those farms that are in organic cultivation and want to follow agro-ecological systems and organizations. Moreover, in less fertile soils, it can be cultivated as a green manure plant.
In fact it is a species that best utilizes the residual fertility present in the soil. Keep in mind that, on average, a production of 2 T / Ha removes 40 kg of N, 20 kg of P2O5 and 30 kg of K2O. For this reason, if the crop is destined for the production of grain, it is good to ensure a good supply of potassium and then choose soils with high endowment of this element. It makes no sense, given the characteristics of this plant, to make potash fertilizers but to use good rotation and soil characteristics to get the best from buckwheat productivity.
As for the sowing operations it is advisable to prepare the sowing bed paying attention to conserve the soil moisture and to carry out a weed control action.

The sowing operation can be usefully preceded by the false sowing that will allow to eliminate the unwanted grasses before sowing.
Moreover, buckwheat is a very fast species in covering the soil, thanks to the speed of germination and rapid growth. It is therefore a plant that easily takes over the weeds, easily managing to suffocate them. However, if the weeds are at a more advanced stage than the crop (which is why performing the false seeding) its competitive power is greatly reduced. In this case it is necessary to evaluate the environmental conditions and intervene with agronomic means (grooming) or with a rescue irrigation that speeds up the growth of the plant with consequent rapid coverage of the ground. Moreover it must be said that buckwheat has a good allopathic effect against some weed species, inhibiting germination.
The sowing period can be chosen between June 15th and July 15th.
Sowing can be carried out with precision seeders, at a distance of 18-20 cm, using 80-100 kg / ha of seed that must be buried at a depth of 2-3 cm.
In good conditions of humidity and fertility the emergency happens after 4-5 days, while the scalar bloom begins about 6-7 weeks after the sowing period.
Remember that, as the grains of scalar buckwheat ripen, they are harvested when most of the fruits have taken on a dark color and the leaves are in an advanced state of senescence. Harvesting operations can be carried out with a combine with a wheat head. The yield of buckwheat is around 1.5-2 T / Ha of grain and 2–3 T / Ha of straw which, given the objective to implement a conservative agriculture, it is good to bury.
Among the adversities, it should be remembered that the major nuisances can be represented by fungi, above all belonging to the genus Ramularia, which strike the leaves, and to the genus Rhizoctonia, which affects the root system. Other molds such as Botrytis cinerea and Peronospora fagopyri were quite common in the past, but now they have lost importance thanks to the introduction of resistant cultivars.

2 thoughts on “How to grow Buckwheat in an organic way”