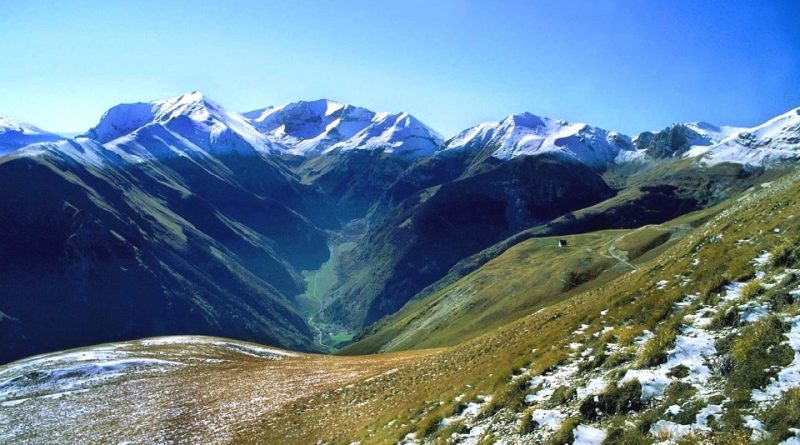 The Monti Sibillini National Park, identified by the codes WDPA 32671 and EUAP 0002, is a protected natural area for the protection and protection of the homonymous mountain massif that extends between the regions of Marche and Umbria. The Park covers four provinces: Ascoli Piceno, Fermo, Macerata and Perugia.
The Sibillini Mountains are a mountain range that rises in the heart of Italy until reaching, with M. Vettore, 2,476 m. It is here, in the realm of the mythical Sibyl that in 1993 the Monti Sibillini National Park was born (71.437 Ha) with the aim of safeguarding the environment, promoting a sustainable socio-economic development and favoring the use of each category of people to create a “Park for all”. Wolf, golden eagle, peregrine falcon and numerous endemic species are the most evident signs of a biological diversity and richness which, together with the charm of medieval abbeys and historical centers, scattered like a crown on the slopes of the mountain group, have contributed to determine an ancient and evocative world where time still seems to have stopped to pay homage to a reality of such extraordinary beauty.
Within the National Park of the Sibillini Mountains the predominant landscape is that of the limestone massif of the Apennine chain, which in this area acts as a bridge between the softer forms of the Tuscan-Romagna Apennines and the highest heights of Abruzzo, assuming even severe traits and steep.
The landscape of this park, originating from the main axis of the Apennine ridge, degrades on the eastern and western slopes. The first is characterized by a great variety of landscapes and natural environments. The valley bottoms of the rivers and streams are articulated in narrow and impressive gorges (such as the suggestive Gorges of the Infernaccio), created by telluric activities and by erosion. Higher up, numerous woods (especially beech woods) crown the Apennine valleys with a prevailing north-south course. The western slope slopes gently towards Umbria with a successive series of high-altitude depressions, the famous Piani di Castelluccio.
The Municipalities that fall within the Monti Sibillini National Park are:
– Province of Macerata: Bolognola, Castelsantangelo sul Nera, Cessapalombo, Fiastra, Pieve Torina, San Ginesio, Ussita, Valfornace, Visso;
– Province of Ascoli Piceno: Arquata del Tronto, Montegallo, Montemonaco;
– Province of Fermo: Amandola, Montefortino;
– Province of Perugia: Norcia, Preci.
The Monti Sibillini National Park still maintains a high naturalness evidenced by the presence of a flora and fauna in good condition. 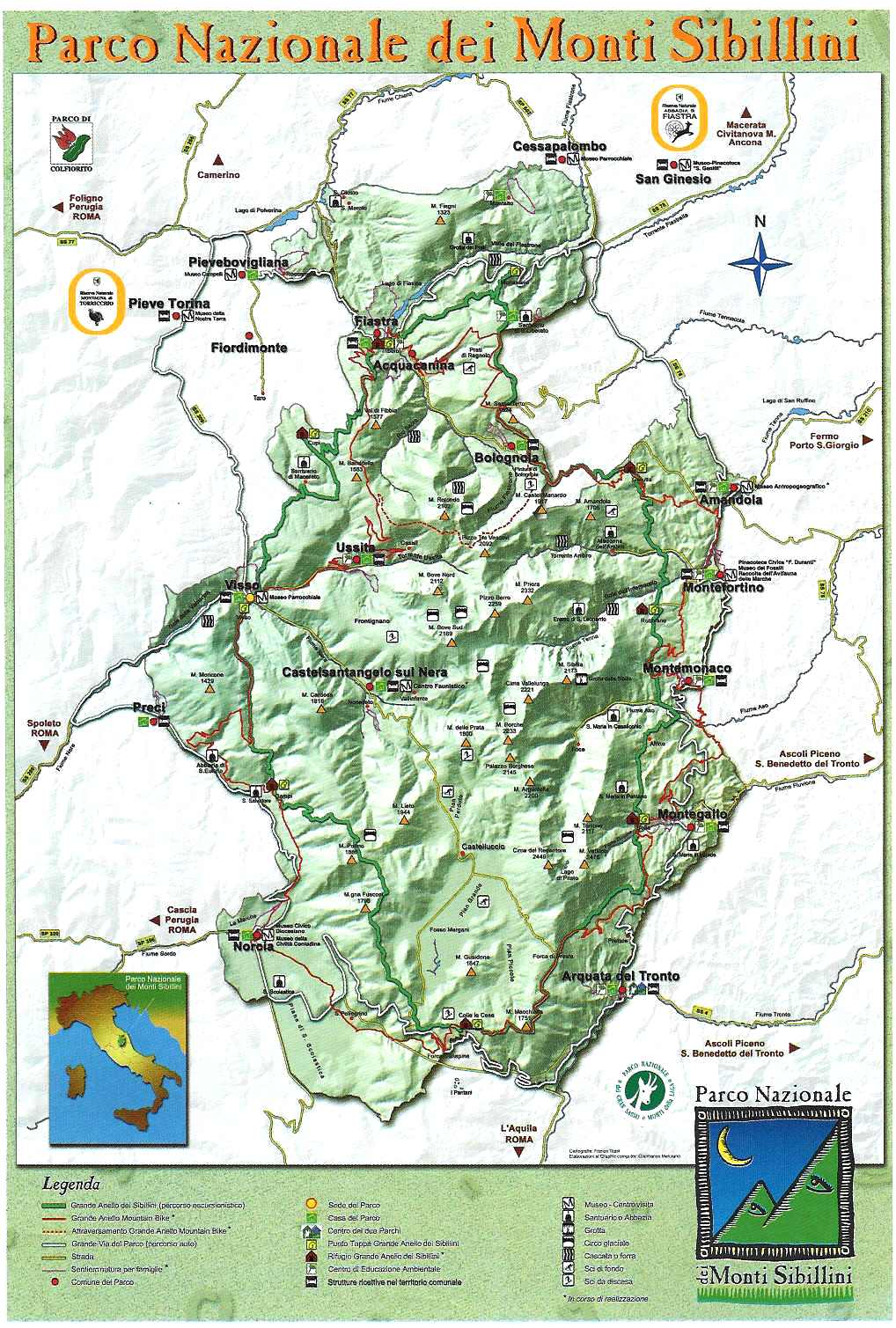 Flora –
In this area the vegetation tends to change as you move from the basal base of the Sibillini, located at an average altitude of 500 m, at the highest peaks. In fact, up to about 1000 m the roverella wood, black hornbeam and orniello predominates, therefore the beech forest, first mixed and then pure. Today, however, the limit of forest vegetation is around 1700-1750 m, or about 100 m lower than the original one; this because of the cuts, made in the past, to favor the development of pasture areas. Above the potential limit of the forest, primary or natural pastures are developed where very rare and valuable species can be found.
Among them we recall the Apennine genepì (Artemisia petrosa ssp. Eriantha), the Apennine edelweiss (Leontopodium alpinum ssp. Nivale) and also Viola eugeniae, Anemone millefoliata, Gentiana dinarica, Dryas octopetala; in the screes and in the detrital areas it is also possible to find Drypis spinosa ssp. spinosa, Isatis allionii, Linaria alpina, Robertia taraxacoides, etc. Also relevant is the presence of Ephedra nebrodensis in the Valnerina and Carex disticha which, in the Pian Grande, has one of its only two Italian stations.

Fauna –
The fauna is also very interesting. In particular, among the mammals it should be remembered the wolf, the elusive wild cat, the porcupine, which spread only a few decades ago, occupies the most thermophilic areas and the roe deer. Thanks to specific reintroduction projects today in the Park the deer and the Apennine chamois have returned to live. On the other hand, among the birds there is the golden eagle, which from the establishment of the park began to nest even in areas abandoned for years, the goshawk and sparrow hawk, typical inhabitants of the woodland and the pilgrim falcon. Among the strigiforms is the eagle owl, while among the galliformes, the southern rock partridge. The alpine and coral chough are also frequent. Also of interest is the presence of the plover tortolino, codirossone, sordone, Alpine finch and walled woodpecker. Among the reptiles, the presence of the Orsini viper, which reaches the northern limit of diffusion in Italy, is particularly interesting. As for the invertebrates we remember the chirocephalus of Marchesoni, endemic to the lake of Pilato.