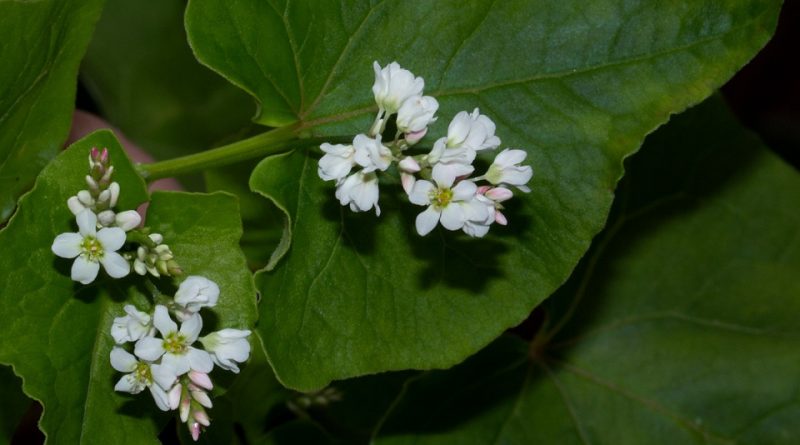 Buckwheat (Fagopyrum esculentum Moench, 1794) is a herbaceous species belonging to the Polygonaceae family.

Systematics –
From the systematic point of view it belongs to the Eukaryota Domain, Plantae Kingdom, Magnoliophyta Division, Dicotyledonae Class, Polygonales Order, Polygonaceae Family, Eupolygonaceae Sub-tribe and therefore to the Genus Fagopyrum and the F. esculentum Species.

Etymology –
The term Fagopyrum is a bit controversial; according to some it comes from the Greek φᾰγᾶς phagas ghiottone and from πυρός pyrós wheat, wheat: therefore a delicious granaglia; according to others from the combination of the Latin fagus (beech), because of the triangular achenes similar to those of the faggiòle, and from the Greek πυρός pyrós, wheat, wheat. The specific epithet esculentum derives from food bait, food: edible, edible, edible.
Regarding the ordinary name there are several hypotheses, for the former it would be called buckwheat because it was widespread in Italy by Saracen traders (Arabs), for the latter the term would be inspired by the color of dark grains like the Saracens.

Geographical Distribution and Habitat –
Buckwheat is a plant native to an area of ​​Asia between Manchuria or Siberia and, recently, some researchers have indicated the area of ​​eastern Himalayas as a probable center of primary domestication. It was introduced in Europe, through Russia, in the Middle Ages. This species is still widespread in Russia today, while in Europe it is limited to certain areas of France and Germany. In Italy it is present in the provinces of Bolzano and Sondrio. 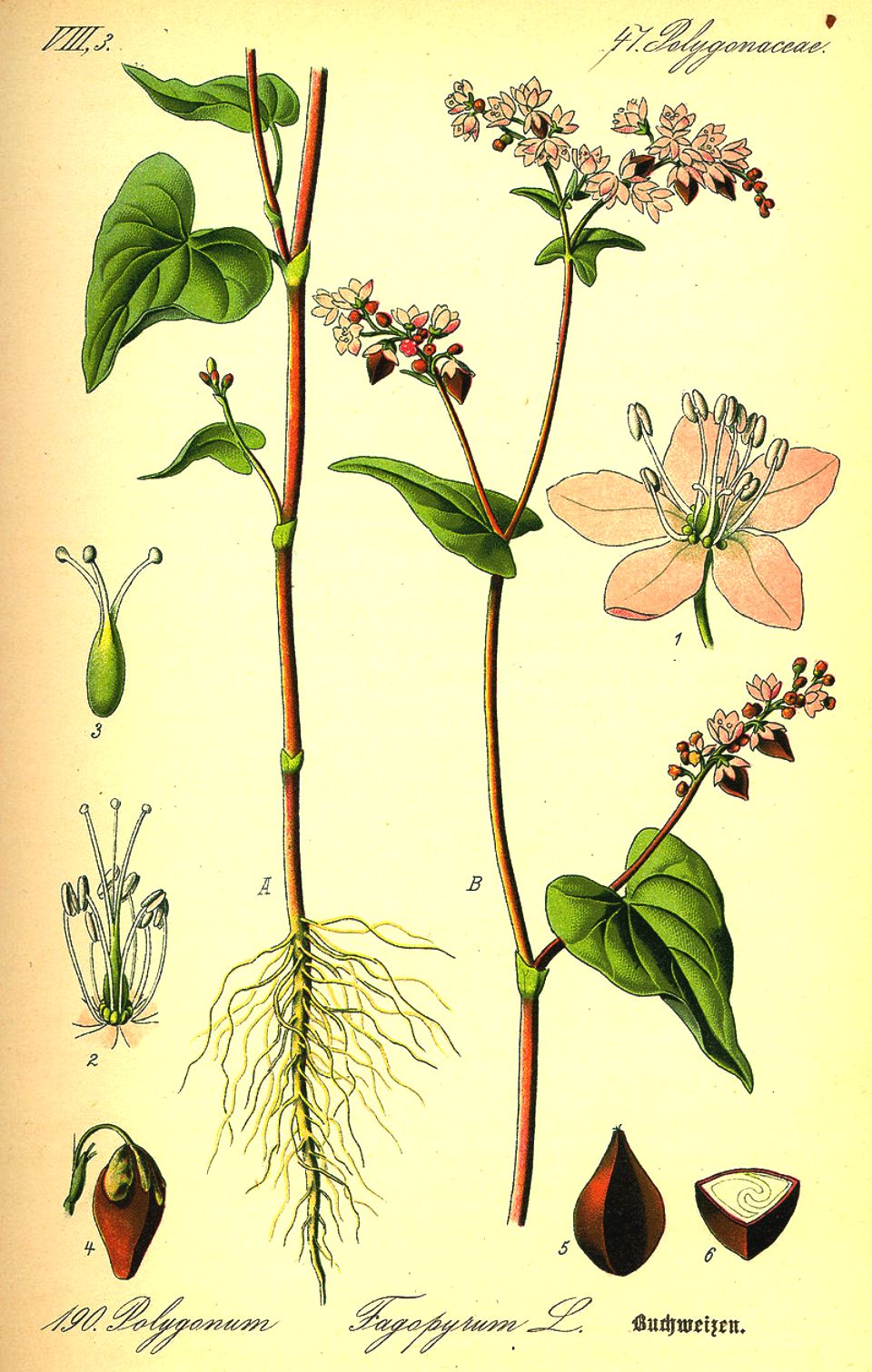 Description –
Buckwheat is a herbaceous plant with a not very developed taproot root, with a cylindrical, glabrous, erect, hollow, red or greenish stem that reaches a height that varies, depending on the variety, from 60 to 120 cm.
It has alternate leaves, lanceolate, provided at the base of a characteristic stipulated formation, called ocrea. The axillary or terminal inflorescence is made up of corimbiform, hermaphroditic, without petals, with five sepals with white-pink or greenish flowers.
The flowers have a dimorphic heterostyl: flowers with long pistils and short stamens (pin type) and flowers with short pistils and long stamens (thrum type) can be found.
Cross-pollination may be either anemophilous or entomophilous. Not all flowers give rise to seeds. The fruit is an achene with a triangular shape, at the center of which is the embryo.

Cultivation –
Buckwheat is a plant characterized by a rapid ripening, a characteristic that gives it a high competitiveness with any other plant; it also has a high sensitivity to low temperatures and prolonged drought.
Due to these characteristics buckwheat, in areas with a more rigid continental climate, must be sown in late spring, on well-fertilized soil (with organic or mineral fertilizer) and plowed on the surface, distributing from 50 to 100 kg / ha of seed in relation to the weight and the methods of sowing (in broadcaster or striped).
It is a species with medium nutritional needs, with a good need in potassium and for its cultivation, during the preparation, no particular care is needed during the growth but it is appropriate that there are a good number of hives near the cultivation fields.
As far as the harvesting is concerned, remember that this cannot take place with complete maturity of the seeds, it is enough that most of the fruits have taken on a more or less dark color. Harvesting should be done by hand with a sickle or sickle. The sheaves are left on the field 15-20 days, so that the complete maturation of the seeds can take place; then threshing is performed. Per hectare there is a yield of 15-20 quintals of grain and 30 quintals of straw.
Forage cultivation, on the other hand, is mown shortly after the beginning of flowering and there is a green production of 120-150 quintals per hectare. In less fertile soils it can be cultivated as a green manure plant. For the organic cultivation technique, see the following sheet.

Uses and Traditions –
Buckwheat, due to its nutritional and nutritional characteristics, has always been commercially placed among cereals, even though it does not belong to the Gramineae family, since the term cereal is not botanical and scientific but commodity and literary. Buckwheat is naturally gluten-free.
Buckwheat cultivation spread to China in the 10th century and in the West during the Middle Ages.
It was precisely in the late Middle Ages that the plant reached Europe arriving on the shores of the Black Sea and then in Mecklenburg and the Eifel (Germany) where it is documented in the fifteenth century with the name of Heenisch, that is today’s Heidenkorn, that is to say “Wheat of the pagans”.
Later in the seventeenth century it arrived in Switzerland where it is known as Heyden or Heidenkorn, while in the mid-sixteenth century the plan is documented for the first time in Italy in a deed relating to the properties of the Besta family of Teglio in Valtellina with the name of formentone. The Sienese physician and botanist Mattioli informs us on the subject when he reports that in his time the peasants, living on the borders of Italy with Germany, used buckwheat flour to make polenta.
With time, buckwheat became one of the fundamental foods in the diet of the farmers of the Valtellina and the Alpine arc, consumed in the form of soups or soups. In today’s Valtellinese gastronomy they are famous: the pizzoccheri, the polenta “taragna” (pastictata with the cheeses). the chisciol, and the “sciatt” (pieces of cheese, dipped in a batter prepared with water, grappa and buckwheat).
Subsequently the plant was introduced, in 1621, into the Duchy of Modena by the Jewish merchant Donato Donati.
Fagopyrum esculentum is a melliferous plant, from which monofloral honey can be obtained in areas with extensive cultivations.
Buckwheat contains a glycoside called rutin, a phytochemical compound that tones the capillary vessel walls reducing the risk of bleeding in people with hypertension and improving microcirculation in people with chronic venous insufficiency.
Buckwheat also contains D-chiro-inositol, a component of the secondary messenger system for insulin signaling that has been found to be deficient in type II diabetes and polycystic ovary syndrome (SOPC). Studies on its use in the treatment of type II diabetes are underway.
Furthermore, according to findings, a buckwheat protein binds tightly to cholesterol. Studies are underway on its use to reduce plasma cholesterol in subjects with hyperlipidemia.
It is important to know that buckwheat is a powerful allergen able to induce acute reactions such as anaphylaxis in sensitized patients. Cases of anaphylaxis induced by the ingestion of buckwheat have been reported mainly in Japan and Korea, and recently also in Europe, especially in Italy, where buckwheat has been described as a “hidden allergen”. Allergic reactions, even serious ones, induced by the accidental ingestion of buckwheat as a hidden allergen in foods such as pizza or other products with starchy foods, are not so rare.

Preparation Mode –
Buckwheat can be prepared in different ways. It is consumed in soups, especially vegetables and, in the form of flour, for the preparation of polenta taragna, Saracen polenta, crepes and pasta (famous pizzoccheri and manfrigole from Valtellina, Japanese soba and bliny (блины) Russians) or even as porridge as the kasha and greckha of Slavic cuisine and for the preparation of desserts or biscuits.
The dried buckwheat leaves, to be used for infusion, are marketed in Europe under the “Fagorutin” brand.