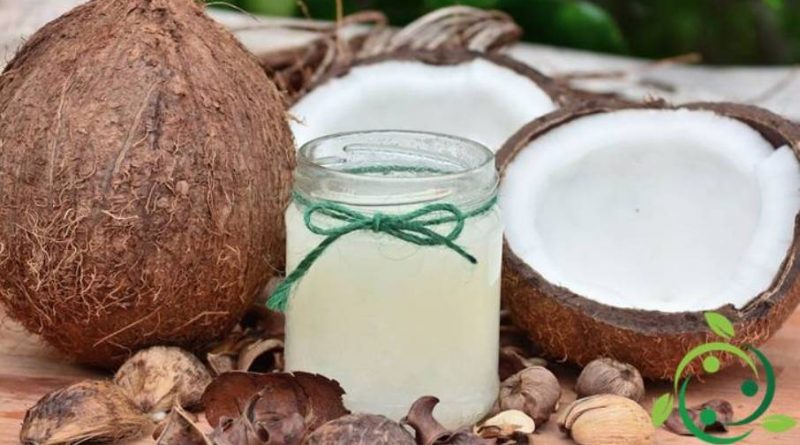 Coconut oil is an oil of vegetable origin that is obtained starting from the endosperm (copra) of coconut. Coconut oil is produced in greater quantities in the countries where this plant is found and especially in the Philippines. (46%), Indonesia (23%) and India (13%). Coconut oil is produced from the pressing of copra, which is previously dried to reduce the moisture content. The yield of this process is quite high since the dried copra contains from 60 to 67% of oil.
Coconut oil can be extracted through “dry” or “wet” processing.
Dry processing requires the coconut pulp to be extracted from the shell, using a heat source such as fire, sunlight or an oven. The oily pulp thus obtained is then pressed or treated with solvents, extracting the coconut oil from the fibrous-protein portion (intended for feeding the animals to ruminants).
The wet process instead exploits the raw coconut rather than the dry copra, obtaining an emulsion of oil and water. The most problematic phase is the separation of the emulsion to recover the oil; this was done by subjecting it to boiling, to the detriment of the color of the product and the cost of the process. Modern techniques instead use centrifuges and pre-treatments, including cold, heat, acids, salts, enzymes, electrolysis, shock waves, steam distillation or combinations of them.
Despite everything, the wet processing is however less effective than the dry one and the yield is 10-15% lower (also taking into account deterioration and pests in dry processing). Wet processes also require equipment and energy investments that involve higher costs.
The right harvest of coconuts (age 2 – 20 months) makes a significant difference in the effectiveness of the oil extraction process. The unripe ones are more difficult to work and have a lower yield.
Conventional processes use hexane as a solvent to extract up to 10% more oil than just mills and extractors. The oil is then refined to remove free fatty acids and reduce susceptibility to rancidity. Other processes to increase conservation are the use of raw materials with a moisture content of less than 6%, maintaining the oil’s moisture content below 0.2%, heating the oil to 130-150 ° C (266 – 302 ° F) and adding salt or citric acid. Virgin coconut oil (VCO) can be produced from fresh coconut milk, pulp or residues. To produce it from the fresh pulp it is necessary to grind it wet, dry it and use a screw press to extract the oil. The VCO can also be extracted from freshly grated and dried pulp with a moisture content of 10-12%, then using a manual press to extract the oil. To use coconut milk instead, it is necessary to grate the pulp and mix it with water, then extract the oil at a later time. The milk can also be left to ferment for 36-48 hours, after which the oil is removed and the mixture is heated to remove the remaining oil. A third option involves the use of a centrifuge to separate the oil from other liquids. Coconut oil can also be extracted from the dry residue in the production of coconut milk.
The refined, bleached and deodorized oil (RBD) is obtained by hydraulic pressing of the heated copra; this guarantees to get all the oil present, equal to more than 60% of the dry weight of the coconut. Coconut oil is not suitable for consumption because it contains contaminants and must be further refined.
Another method for extracting coconut oil involves the enzymatic action of alpha-amylases, polygalacturonases and proteases on the diluted coconut pulp.
Unlike virgin coconut oil, refined coconut oil has no coconut taste or aroma and is used for cooking, for industrial food processing and for cosmetic, industrial and pharmaceutical purposes.
Refined coconut oil can be further processed into partially or completely hydrogenated oil to increase its melting point.

Since virgin coconut and RBD oils melt at 24 ° C, the foods containing them tend to exude with warm temperatures. That is why, in warmer areas, it is desirable to use hydrogenated coconut oil. The melting point of hydrogenated coconut oil is 36-40 ° C (97-104 ° F).
With the hydrogenation process, unsaturated fats (monounsaturated and polyunsaturated fatty acids) are combined in a hydrogen catalytic process to make them saturated.
Coconut oil contains only 6% of monounsaturated fats and 2% of polyunsaturated acids. In the partial hydrogenation process, some of these are transformed into trans fatty acids (lipids with a negative effect on the body).
Another procedure is that of obtaining fractionated coconut oil which consists of the separation of the fatty acids that compose it to be able to use them specifically. Lauric acid (chain of 12 carbon atoms) is often removed due to its value in industrial and medical uses.
The fractionation of coconut oil can also isolate caprylic acid and capric acid (medium chain), used mainly for medical purposes, for special diets and in cosmetics.
The coconut oil thus obtained, with the various processing methods, is then widely used both for food use and in the oleochemical industry, for the production of surfactants, drugs and cosmetics.
In the kitchen, in particular, coconut oil is widely used in the food industry, as a frying oil, in the preparation of bakery products and as a base for vegetable butters and margarines.
Virgin coconut oil does not have a very high smoke point (although higher than other oils), but is 175 ° C despite its saturated fatty acid content. The taste of unrefined coconut oil is exotic, while the refined taste is deodorized assuming a neutral flavor. It is also used to replace solid fats at room temperature produced through chemical or chemical-physical processes (interesterification and intra-esterification of fats, fractionation, hydrogenation) in bakery and pastry products. Coconut oil stearins have a melting point of 27 – 32 ° C while hydrogenated coconut oil has a melting point of 30 – 32 ° C.
In the countries where coconut oil is produced, it is used in cooking, both raw and fried. The smoking point, as usual, depends on the concentration of free fatty acids (FFA), therefore on the quality of the refining process.
However, coconut oil has a high saturated fat content, which is why the various health and health agencies around the world suggest to avoid or consume it limitedly.
In fact, coconut oil contains a significant dose of lauric acid, a saturated fat that increases the levels of total cholesterol in the blood (both LDL and HDL). Although in some cases it may improve the ratio of blood lipoproteins, the possibility that persistent consumption of coconut oil increases the risk for cardiovascular diseases cannot be excluded.
In any case, given that the majority of saturated fats in coconut oil is constituted by lauric acid, this can be considered preferable compared to partially or totally hydrogenated, or animal type products. Furthermore, due to its high fat and therefore calories content, regular use of coconut oil in food preparation can cause weight gain.
Also interesting is the content of saturated fatty acids in the medium chain of coconut oil, such as caprinic, caprylic, capric and lauric itself; these are nutrients that represent a highly available source of energy, since they are easier to absorb and oxidize than long-chain fatty acids.
Furthermore, the reduced content of palmitic acid is compensated by a similar quantity of oleic acid and a small percentage of linoleic acid.
Coconut oil is one of the main sources of lauric acid for which it competes with palm kernel oil. Among the vegetable oils it is among those that have the least amount of unsaturated fatty acids. Due to the high concentration of saturated short-chain fatty acids, C6-C12, it has a lower melting point than that of animal fats rich in saturated long-chain fatty acids, C16-C18.
In Australia, hydrogenated coconut oil is a common ingredient in snacks and goes under the commercial name of Copha.
The fluid fraction of coconut oil has been tested as a possible biodiesel.