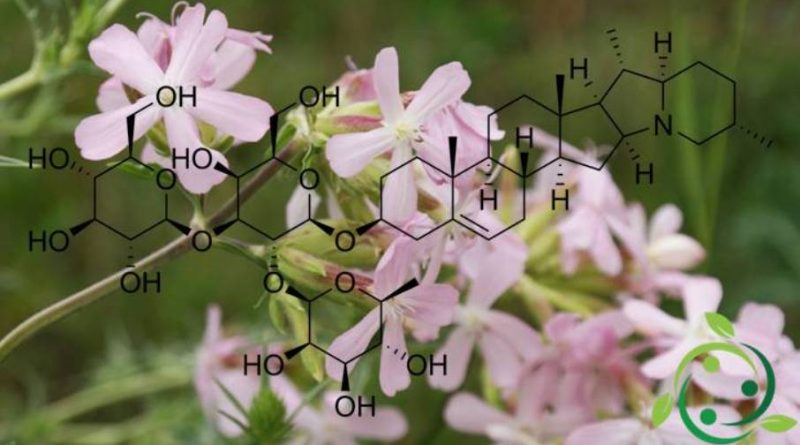 Saponins (or saponosides) from the chemical point of view are terpene glycosides of vegetable origin.
These molecules are named after the Saponaria officinalis, which was once cultivated for washing wool.
But the saponins are contained in many plants and in some cases their presence can even reach 30% of the dry weight of the plant.
The main physical characteristic of saponins is to lower the surface tension in aqueous solutions; they form foaming colloidal solutions and can therefore be used as emulsifiers.
Saponins are formed by the union of sugar residues (such as glucose, fructose, galactose, arabinose and others) with a non-sugar molecule (aglycone). This particular molecular structure is responsible for the detergent activity of saponins since the sugars form a water-soluble section while the aglycon is fat-soluble.
The triterpene nucleus saponins (such as licorice glycyrrhizin or horse chestnut escin) have a pentacyclic structure with 30 carbon atoms while the steroid nucleus structure has a base with 27 carbons (often the aliphatic chain is transformed into two heterocyclic rings).
The presence of saponins in plants seems to be linked to defensive functions against pathogenic organisms, in particular fungi. In some cases saponins are already present in plants; in certain circumstances, in which the plant suffers damage, they are synthesized by precursors. This function is supported by the fact that among the cereals the only one that contains saponins is oats; in fact, this plant is the most resistant of cereals to molds and fungi.
It has been ascertained that the mechanism of fungicidal action is due to the reaction of the saponins with sterols present in the membranes of the hyphae of the fungi, to the rupture of the membrane and to the consequent death of the fungus.

Saponins are molecules with chemical – physical properties that are especially important for the cosmetic and dermo – functional industry, where they are used as carriers.
In fact the triterpene nucleus, as well as the steroid one, is easily identifiable as a portion of lipophilic molecule, slightly soluble in water; its glycosylation allows instead its solubility. This double characterization: lipophilic aglycon and hydrophilic glycon, makes the amphiphilic (or amphipathic) molecule, ie with a pole similar to water and the other akin to oily and fatty substances, therefore lipophilic.
Because of this peculiarity, saponins, thanks to this important peculiarity, are used as carriers of hydrophilic molecules on a fat matrix, as for example the skin could be; they can be dragged behind the hydrophilic active principle, making it pass easily through a fat matrix, like the one that forms the ends of cell membranes. This also happens for firming and anti-cellulite products containing caffeine, an hydrophilic active ingredient carried by saponins in the deepest parts of the dermis.
Saponins are present in different drugs with different use profiles and, basically, saponins have an irritating action on all mucous membranes; action that is proportional to the dose used. The expectorant property of glycyrrhizin (contained in Liquorice) is due precisely to the irritating action that this molecule determines on the bronchi; in turn, the irritating action determines the secretion of a more fluid mucus, which favors the elimination of the denser congestion.
Another property generally ascribable to saponins, is the capillarotropic one, that is able to act directly on the capillaries increasing their resistance and decreasing their permeability. They also have action on smooth muscle vessels, where they cause vasoconstriction; they also increase the permeability of the membranes, causing a structural decompensation of the fluid mosaic and of the membrane proteins that facilitate the transport of various substances as can be the active principles.
Ultimately, in therapy, at the moment, the saponins of some plants are recognized as anti-inflammatory, cicatrizant (as in liquorice) and anti-edema (as in the horse-chestnut).
Saponins are often used in industry for the subsequent production of steroid hormones (such as, for example, testosterone and cortisol).
It should be remembered that the injection of these compounds parenterally leads to hemolysis.
Oral intake, on the other hand, does not produce this poisonous effect since the haemolytic activity of saponins is only carried out if the molecule remains intact, which during digestion does not occur as it is split into its two components.
In cold-blooded animals and in fish, saponins are toxic in any case.